Use your imagination – This $65,000 barn-find Mercedes-Benz 190SL can turn into a dream car

A barn-find for sale! A 1960 Mercedes-Benz 190SL is up for auction with H&H Classics on July 26th. The auction house estimates that it will hit $65,000. Why not three or four times more? Well, it doesn’t look too good.

The classy classic had been abandoned in an old garage in Solihull and the one who found it was Mark Bryan of H&H Classics motorcycle department, as he was in search of bikes to restore and eventually sell. 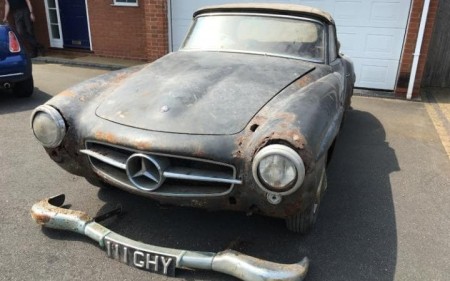 “What a great find!”, he said. “Never in a million years did I expect to see this, an original UK-registered, right-hand-drive 190SL in dire need of restoration! It just goes to show that you never know what is lurking in that old lock-up.”

If the 57-year-old classic convertible was in good condition, it would fetch about 200,000 dollars minimum, while the record price for a 190SL sold in an auction was $209,000, back in 2015. For the moment, it is eaten away by rust, the fenders have dropped and the seats material together with the canvas roof are torn. The right-hand-drive car has lost its rear lights, rear number plate and gas tank lid.

Designed and built as the more affordable young brother of the exhilarating Mercedes-Benz 300SL Gullwing supercar, the 190SL rolled out the production lines between 1955 and 1963 and was only available as a roadster, featuring a conventional monocoque chassis, yet, the same suspension. The car, powered by a 1.9-liter 4-cylinder engine with 104 HP, running from a standstill to 100 km/h in 11 seconds, on its way to the top speed of 170 km/h (106 mph).