Ahead of its anticipated Geneva premiere, the updated 2019 Mercedes GLC has already been tested by German magazine Autobild. Among the news, hybrid variants and a revised four-wheel drive system.

Mercedes-Benz will soon be presenting the renewed GLC at the Geneva motor show in early March. This will undoubtedly generate the necessary media attention. But, even so, Mercedes-Benz is trying to double the PR value of the facelift by inviting a select number of automotive journalists to Arvidsjaur in the north of Sweden, where the manufacturer performs the majority of its winter tests, for an introduction to the prototype of the renewed GLC, arriving at the dealers in June.

To get acquainted with the revised 4Matic all-wheel drive system and hybrid drive, Autobild has put through its paces a camouflaged prototype of the future GLC 300 4Matic EQ Boost Still in pre-production form, the black prototype is adorned by pieces of duct tape meant to conceal the exact position of the headlights/tail-lights and their the final shaping. Inside the updated 2019 GLC, Mercedes’ new MBUX system, introduced last year in the fourth generation A-Class, makes its appearance. It fluently combines the new digital trends with a 10.3 inch central touch screen and with modern infomedia and internet possibilities. The instruments are analogue by default, but now owners can opt for an optional and configurable 12.3 inch screen; known from the updated C-Class. In the context of the facelift, a touch pad takes the place of a rotary knob on the center tunnel. 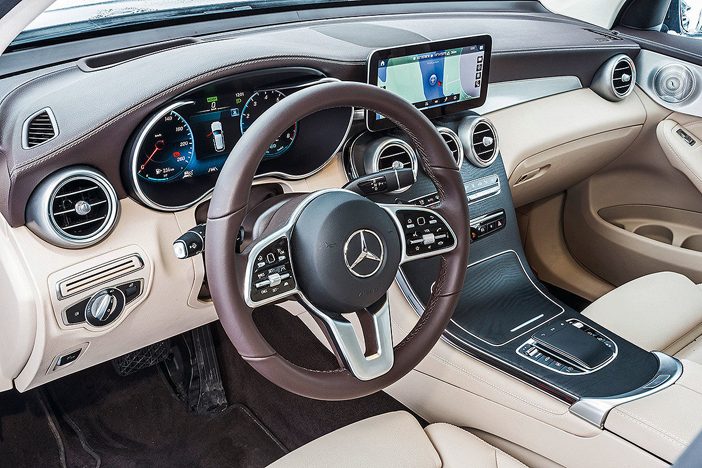 The facelift of the 2015 competitor from Stuttgart for the Audi Q5, BMW X3 and Porsche Macan includes a sports suspension. That is optional and previously only available for the GLC Coupé. The sports suspension includes a more direct steering and stiffer steel springs as well as dampers. That should benefit the driving dynamics. As always, the renewed SUV can also be ordered with air suspension.

Engine news are also available, both in petrol and in diesel form. The revised GLC will be available in two plug-in hybrid versions, while the old 7-speed automatic transmission makes way for a more modern version with 9 gears. The aforementioned plug-in hybrid versions are the GLC 250 4Matic EQ Boost and the GLC 300 4Matic EQ Boost. They are both equipped with a 14 hp electric motor, which assists the classic motor during acceleration, and a 48 volt electric system. The basic unit is in both cases is a 2.0 liter 4 cylinder turbo petrol engine, but the combined power is different: 197 hp for the GLC 250 and 258 hp for the GLC 300. The EQ Boost models are equipped with a so-called sailing function which allows the petrol engine while driving to be temporarily disabled if the accelerator pedal is not pressed. Below the line, this should result in a fuel consumption reduction of 15 percent. Diesel variants are available in 163 hp, 194 hp or 245 hp guises, respectively, in the GLC 250d 4Matic, the GLC 300d 4Matic and the GLC 350d 4Matic. Furthermore, the renewed SUV will be available as the 400d 4Matic with the 2.9 liter in-line 6 cylinder turbo diesel engine, good for 340 hp.

So, how did the prototype of the 2019 Mercedes GLC 300 4Matic EQ Boost drive? Autobild was impressed with this new powertrain. It can be accelerated quickly from standstill and the 2.0-liter engine revs eagerly. The throttle response is also good thanks to 340 Nm of torque (available from 1,200 rpm). Furthermore, the 4 cylinder has become noticeably smoother and more refined. Unfortunately, there is little pleasure from this GLC in acoustic terms. Both the engine and the exhaust produce an uninspired sound. But those who are sensitive in this regard, can opt for the AMG versions of the renewed SUV. The GLC 43 and GLC 63 arrive one month after the regular variants in the showrooms. As always, the GLC is comfortable and quiet and continues to offer confidence-inspiring handling. If you were expecting a revolution, the facelift will disappoint, but that was not necessary as the German SUV is one of the best selling Mercedes-Benz models. The competition has indeed increased, but the GLC has enough charm to resist it and remains one of the best premium SUV models on the market.