Unimog U 5023 – Extreme firetruck fights the hazards of forest fires

Extreme temperatures have sparkled wildfires across the world. California in the United States of America, Spain and especially Greece have been fighting the horrendous disasters. Germany is no stranger to such catastrophes either. But the German fire brigades have an extreme team player: the Unimog U 5023.

The Mercedes-Benz Unimog 5023 is the most potent of firetruck, capable of tackling just about any off-road driving conditions and gradients, to reach the heart of the forest fires in the Black Forest. 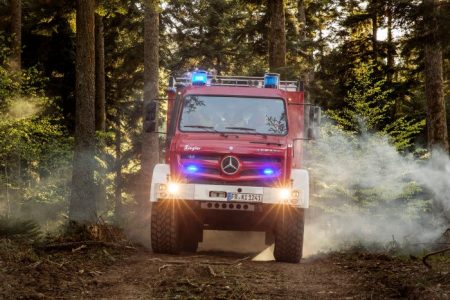 With a ground clearance of 450 millimeters, the Unimog effortlessly deals with steep angles of approach and departure, regardless of how unbeaten the tracks are. Kirchzarten, a town in the Baden-Württemberg land, has chosen the Unimog U 5023 TLF 4000 pump water tender from Ziegler.

The extreme fire truck comes with the benefit of the 14.5-tonne all-rounder. A centrifugal pump is able to pump out 3,000 liters per minute. The vehicle is equipped with a 4,000-liter capacity water tank and with an additional 500-litrer foam tank, both providing enough amount of fire-extinguishing agents, even if the nearest hydrant is a long way down and away. 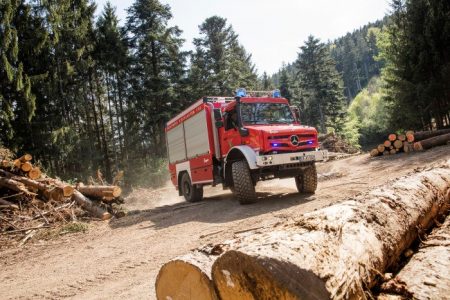 The Unimog is powered by the four-cylinder OM 934 engine (BlueTec 6), featuring a displacement of 5,132 cc and capable of developing 231 horsepower and 900 Nm of torque.