Unbeaten. Stirling Moss tells the story of the Mille Miglia

Mille Miglia. 1955. That is where and when the story began. Sir Stirling Moss was only 25 years old back then. Him and his co-driver Denis Jenkinson marched through 992 miles of Italian countryside in just 10 hours, 7 minutes and 48 seconds. Their average speed was staggering for that time: 98.53 miles per hour (159 km/h).

Things like this happen once in a hundred years. Sixty years after the magical triumph, Sir Stirling Moss remains unbeaten. The Gentleman of Speed tells the story of the amazing race of 1955.

“Once the flag fell, I went flat out”, Moss remembers of his start that happened at 7:22 in the morning. “Obviously, when I’d see a car I caught up with, I really felt great about it, but I had no idea of the enormity of what it meant to myself because it’s really—it’s quite the thing to have on your CV.”

He really had no idea back then that he was just heading to the annals of racing. In what history of motorsports calls “The Greatest Race” – a title that maybe none of the motorsport competitions will ever get again – Moss and his navigator Jenkinson finished 32 minutes ahead of the then-two times Grand Prix World Champion Juan Manuel Fangio, his teammate. Almost one thousand miles (992.332 miles/1597 km) in 10 hours, 7 minutes and 48 seconds. His record stays – as the video looking like a Hollywood story says – unbeaten.

But it was not a race of one against each other. It was a race against the clock, as the cars are released at one minute intervals.

The drivers of the era became heroes of racing. The machineries that ran through the Mille Miglia to the finish line now became icons of the automotive world. And so did the Mercedes-Benz 300 SLR, with the #722 race number. A fireball dangerous beyond belief. To make people understand how perilous the car was, Moss says he had to wiggle it from left to right on the road, so that the spectators would take a few steps back, as he flew through the often narrow Italians streets along the race itinerary, where every corner is a surprise.

“Oh, I’m certain it’s my greatest win,” says Moss about the phenomenal event. “I can’t think of any other car in the world that would have given me the opportunity to achieve the speeds we did”, he thinks 60 years after pushing his SLR to an amazing 98.53 mph (159 km/h) average speed. 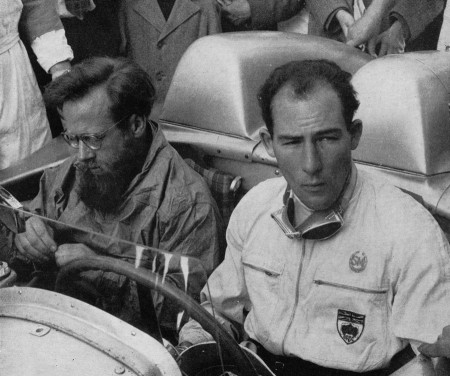 Called SLR for Sport Leicht-Rennen (“Sport Light-Racing” in English), the 300 SLR was the world’s most advanced racer of its time: direct fuel-injected straight-8 engine, roughly 310 horsepower, and a top speed of around 180 mph (290 km/h).

“The 722 is a really strong car…”, says Moss, bringing his enticing and exciting SLR into the contemporary. “The fact the car’s really 60 years old doesn’t matter—that car, the way it is now, I reckon we’d beat any other cars, anyway!”