Ukrainian Rock Star Who Gave Up U.S. Tour To Fight in His Home Country, Is Former Mercedes Driver

Andrii Khlyvniuk. His name might not ring a bell to many of the Americans and Western Europeans. But he is rising to stardom worldwide after he played an old Ukrainian folk song in the streets of Kyiv, two days after Russia started the war in Ukraine. Andrii is the lead singer of Boombox and he was getting ready for a tour in the U.S. and Canada when Russia attacked Ukraine. He is now fighting for his country and driving pickup trucks to bring supplies to people in need. Passionate about cars, he used to drive a Mercedes W140, in times of peace.

The Mercedes he used to drive is actually just some pretext, a trick pulled out of the journalism hat to bring the artist to the website. It is, in fact, his devotion to his country, when he could’ve very well gotten on the plane to the U.S. instead of risking his life, that got our attention. But he canceled that tour. He had more important business to attend to at home. He had a war to fight in what is right now the most dangerous place on earth.

“Ой у лузі червона” or “Oh, in the Meadow, There Is a Red Kalina”  (watch the video below) is the song that people now get to hear all across the world. Ukrainian refugees fleeing to Poland, Romania, or other countries across Europe play it. It is played in the street during protests against Russia’s violent and unprovoked invasion of Ukraine. Andrii Khlyvniuk is the one who started it all.

The Ukrainian rock star, wearing his military uniform, a black cap that reads “NY” and carrying a rifle, played it a capella right outside the Saint Sophia Cathedral in the heart of Kyiv. His voice smashed the silence of the deserted streets, as people hid away from the invaders that were launching missles at their city, slamming them straight into apartment buildings. From that moment on, the song became a worldwide hit. 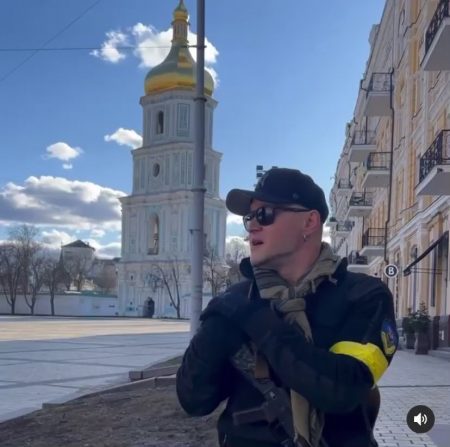 The Kiffness remixed the folk song that the rock star played in the central square of Kyiv, a stone’s throw away from the historical Maidan Square. There are no musical instruments in times of war, no mics and there is no stage. The video recorded by his comrade Miro Popovich (actor and film academy student in New York) has now reached almost 5 million views and it’s still counting. All royalties of this remix will go to the armed forces of Ukraine. Andrii himself joined the Territorial Defense Forces, shortly after he took his kids, Ivan and Sasha, to a safe place, away from shelling.

But the 42-year old artist was injured by a mortar attack on March 26, as he was getting ready to cross the Irpin bridge (26 kilometers/16 miles from central Kyiv) on a humanitarian mission. He was admitted to the hospital and received stitches on his right cheek, after doctors pulled out a piece of shrapnel. Three days after the attack, with a black eye and a bandage on his face, he got back into his military uniform, ready to defend his country against Putin’s horrific and yet failed attempt to invade Ukraine. 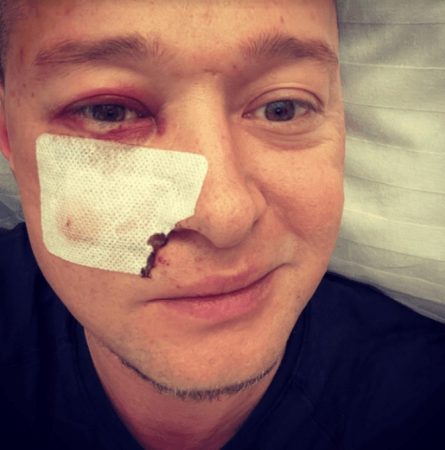 Andrii is the driver of his patrol. For the past few days, since the Russians left the Kiyv area, he has been going around driving pickup trucks. Yes, several. Some ended up in pieces after the invaders shot at them. He’s also dealing with roads ruined by shelling that smashed the tarmac. Ukrainian roads are not exactly the safest to drive on right now. He and his colleagues are witnesses of the evil and devastation that the Russian army left behind.

And going back to the “pretext”, back when the Russians were hundreds of miles away from Kiyv, Andrii Khlyvniuk had a Mercedes-Benz W140 to drive around. The old-school sedan came with an automatic transmission, black leather seats and a sunroof (check out PHOTO GALLERY). Andrii drove it in an extensive vlog five years ago. The car also showed up in a photo session in which singer Sasha Chemerov joined Andrii to promote one of the songs they had written and recorded together. 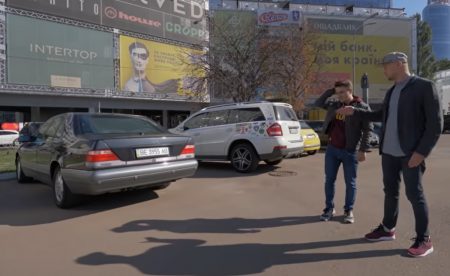 The rock star is pretty down to earth when it comes to cars. He has been driving a first-generation Volvo XC90 for years. On the first days of war, he used his own SUV to do his… new job. Back in February 2014, he put Red Cross stickers on his white Volvo and drove injured people to hospital, following the Maidan Square violent incidents. Long gone are the guitars, but he’s got a rifle now. It comes in handy in a war. More than guitars do, he says.

On the day he was wounded, Andrii received a message on Instagram from the legendary David Gilmour from Pink Floyd. He wanted to check on the Ukrainian rock star and propose a collaboration. Ten days later, the song came out and became an instant hit. Approximately three million people watched the video on the war in Ukraine, with Andrii Khlyniuk accompanied by Pink Floyd. All proceeds will go to those affected by war.