New Audi A4 versus the rest of the world. After the previous generation was easily outsmarted by both the new C-Class and the VW Passat, this time Ingolstadt wants its revenge in the epic battle of small gasoline engines. The A4 in 1.4 TFSI guise competes against the VW Passat 1.4 TSI ACT, the BMW 318i and the Mercedes C 180 in the mammoth Auto Bild test.

Before you might want to raise your eyebrows we’d like to say that the VW sourced 1.4 TSI with cylinder deactivation is indeed featured on the list of the CO2 emissions cheating engines. But, the A4 is currently not affected by CO2 scandal since its engine is in fact the version without cylinder deactivation. For the Passat, VW stats from the official brochure estimate a 5.1 l / 100 km mixed consumption – corresponding to a CO2 emissions rating of 117 g / km. How realistic that is, remains to be seen in real-life. In the AUTO BILD test the Passat swallowed under realistic conditions 7.0 liters, the equivalent to CO2 emissions of 167 g / km. That, and only that figure, is taken into consideration for the test. 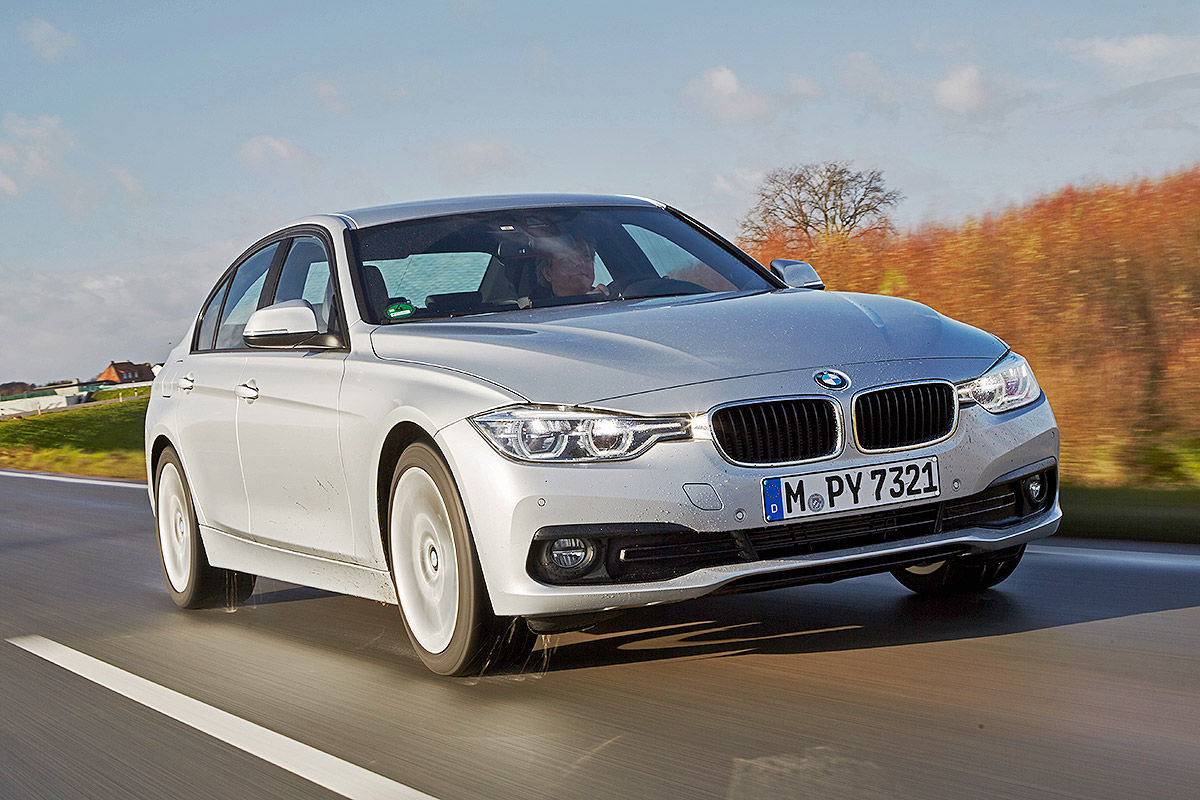 For
The classic design and agile handling speak on their own for the 3 Series. Good space too.

Against
The little three-cylinder seems slightly overwhelmed. The suspension became very rigid after the facelift.

On the market since 2012, the BMW now acts like a classic – in a pleasant, sporty way that is. And its compact dimensions – it’s ten centimeters shorter than the A4, as a matter of fact; are refreshing in light of the fact that the Bavarian is noticeably more spacious than both the A4 and the C-Class. Knowing the zippy nature of the 1.5-liter from the Mini and the 2 Series Active Tourer our expectations were running high. But here in the 3 Series, in all honesty, the three-cylinder seems overwhelmed and easily hesitant. It simply does not seem fit enough for accompanying the 3 Series which in this day and guise, at least, seems seriously outpaced by its rivals. Not even its consumption can save it: 6.4 liters/100 km is enough to secure only the fourth and last place. So: great car, beautiful engine – they just do not seem to understand each other perfectly. 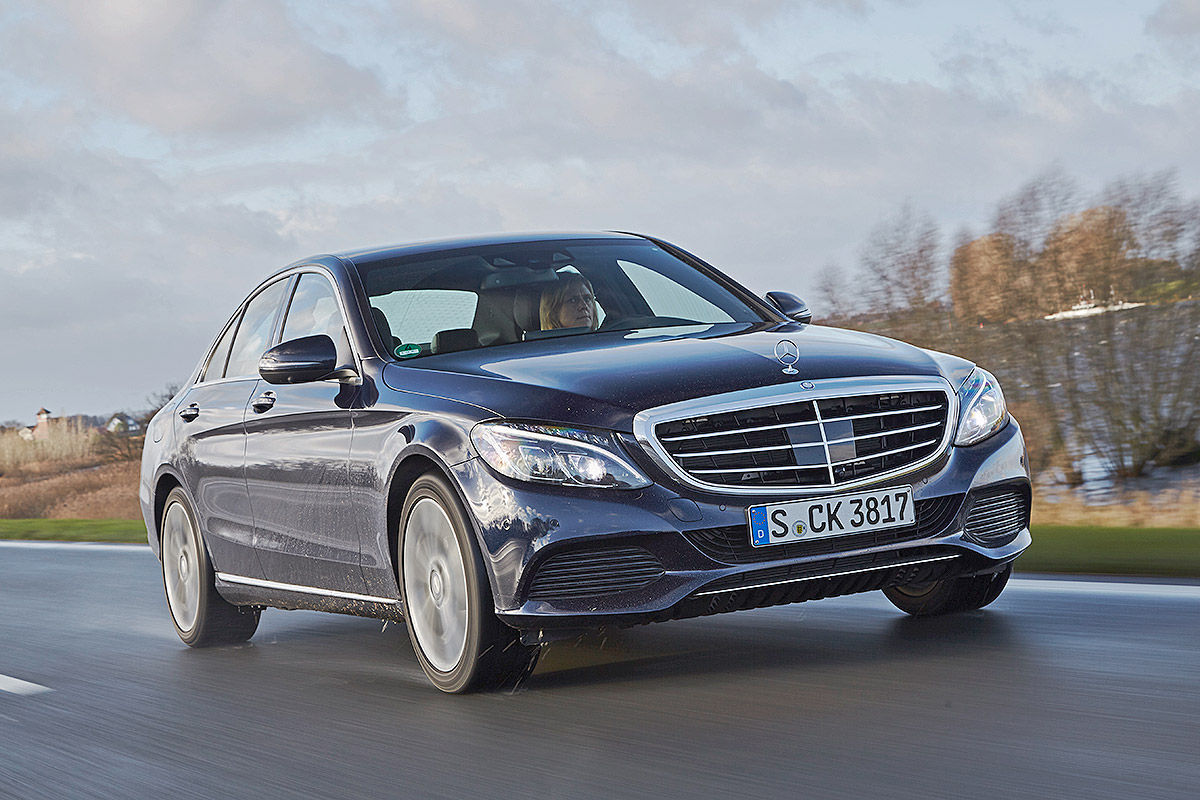 For
The Benz scores big with its high level of comfort and tasteful decor. Powerful engine.

Against
Mercedes calls for a pretty hefty price.

Third place for the C 180 can be read in two different ways. Variant one: Penultimate, more is not possible. Because the Benz has only adequate rear seats space and is particularly expensive. In the test, the C 180 costs about 6,000 euros more than the not exactly modest but similarly equipped A4 and 3 Series. Version two: The Mercedes is clearly in front of the BMW which, on its own, is a significant piece of news. Because it springs very comfortable, especially with the lithe Airmatic air suspension (1416 Euros). Because he is built to a very high standard. Because it is amazingly fast on the road. Although the 1.6-liter turbo is running rather rough and gruff, it has all the strength and staying power you need. Bottom line: third place. 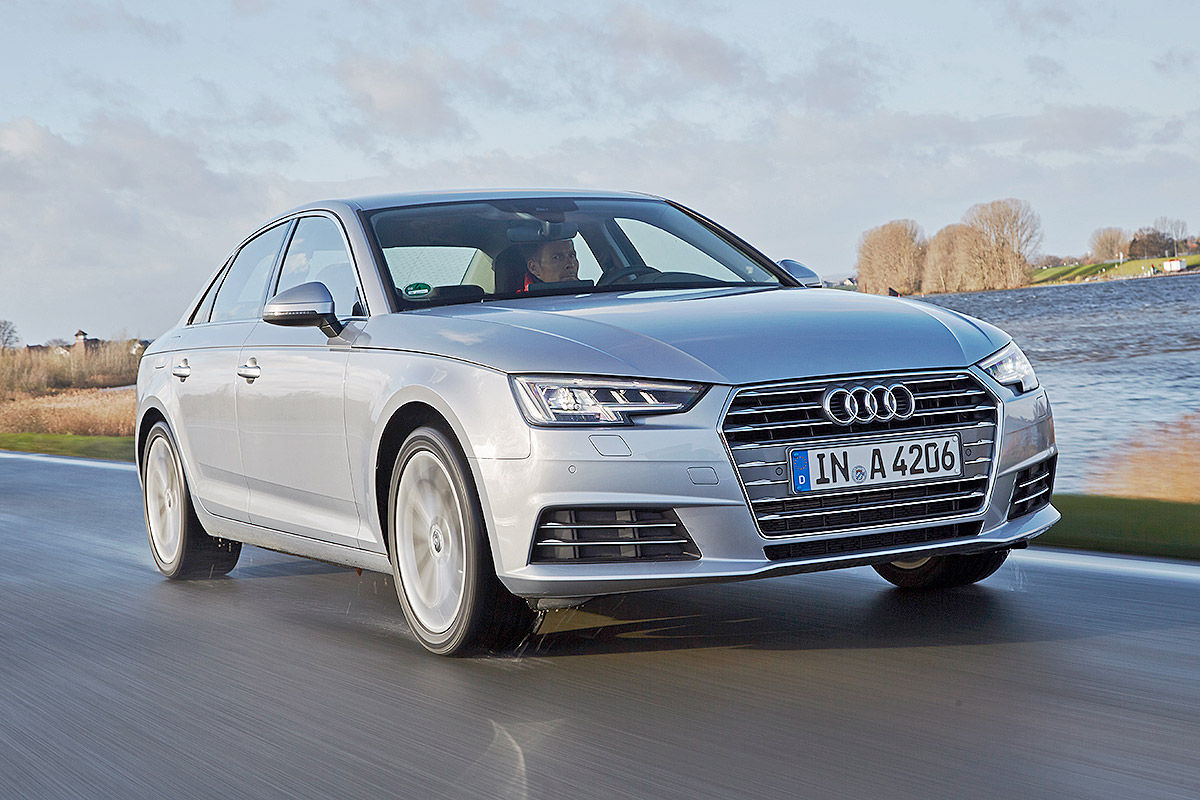 For
Fine Motor, sovereign chassis. And the interior is a feast for the eyes, best ergonomy.

Against
The space in the rear is smaller than might be expected of the A4, price is now on BMW level.

Forget it, we do not argue about the design here. The new A4 appeals to a very stately appearance, actually outgrowing its predecessor at 4.73 meters in lenght – which place it almost at the top of the class. However, the size inflation is not directly reflected in the interior space – the BMW has more space in the rear, not to mention the VW Passat. Audi sets different standards, with the careful interior fit and finish and processing power of its nVidia Tegra based multimedia system. The lively, fast-revving 1.4-liter TFSI with 150 hp runs turbine-like. And it’s as quiet as ever too. Unlike the A4 with sports suspension this A4 was equipped with the adaptive comfort suspension for 980 euros – which we can highly recommend to people who appreciate peace and comfort. Even if the A4 is a generally soft and serene cruiser, in therms of damping, it also proves reassuringly sprightly when the road gets twisty. However: the somewhat synthetic steering (in direct comparison with the BMW and Mercedes) generally builds a thin bridge between the driver and the car’s agility potential. True, the 3 Series steers more lively but it springs significantly harsher. 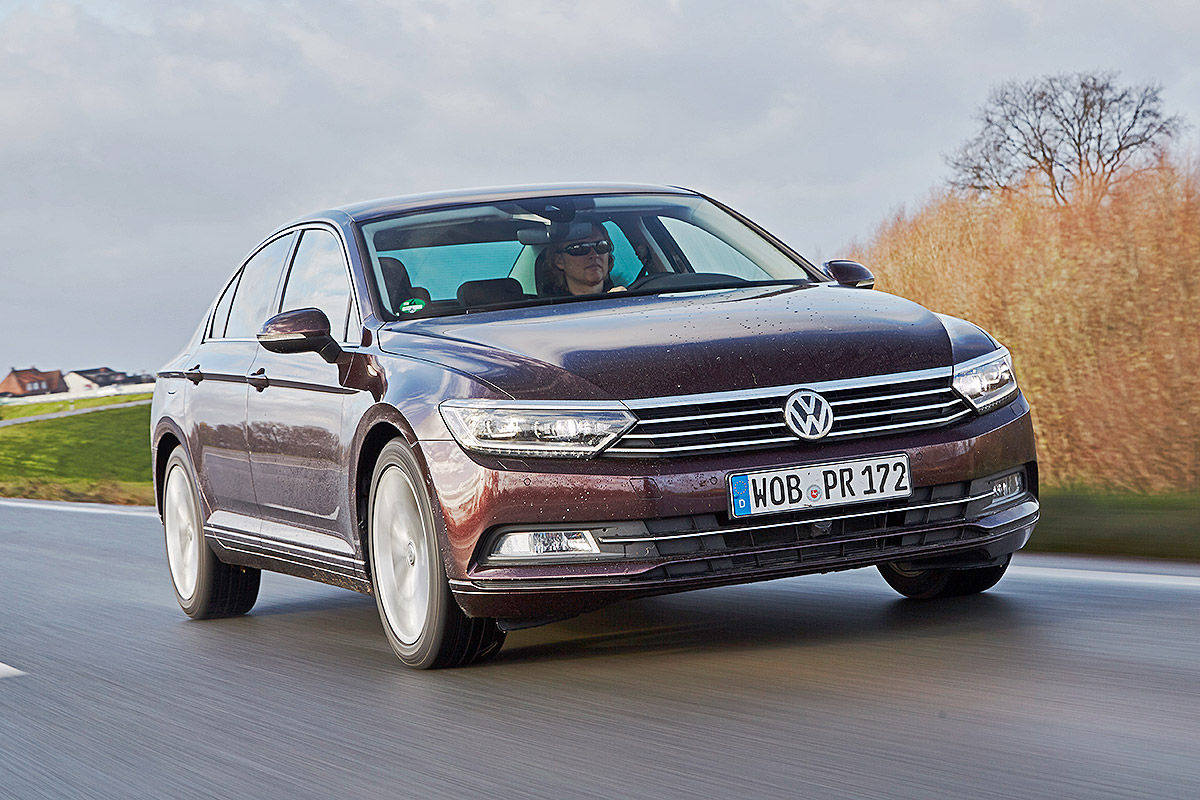 Against
Even the Passat has a hefty price tag now.

FOR THOSE WHO REALLY VALUE SPACE, the Passat is a good choice. The VW blows with his space virtually the scope of the class, compared with its giant rear seat head, knee and elbow room and the mighty luggage compartment (586 liters). For this purpose, form follows function so VW chooses to use its usual clean, stylish but stuffy lines. Sometimes too much is too much: The fine wood inlay Brilliant Pine decor raised a few eyebrows and struggled to find a fan among the Auto Bild testers. Better received was the transversely-mounted 1.4-liter TSI engine with 150 hp. It runs quietly and relaxed with the ACT (for Active cylinder management) performing silky smooth and did so more frequently than you might think: on partial load range, for example when driving steadily, two cylinders are shut off and then quickly switched back on again at full throttle. Works well. The DCC suspension (1,200 euros extra) with adaptive dampers covers a meaningful bandwidth between convenience, comfort and tautness. Mind you, too much sporting ambition you should not expect of it. Last but not the least, the fine, direct Progressive steering (500 Euro, must have) is also a fine surprise, befit of all driving tastes. Little things matter and this is why, at the end, the Passat finishes ahead – not only because of its size. 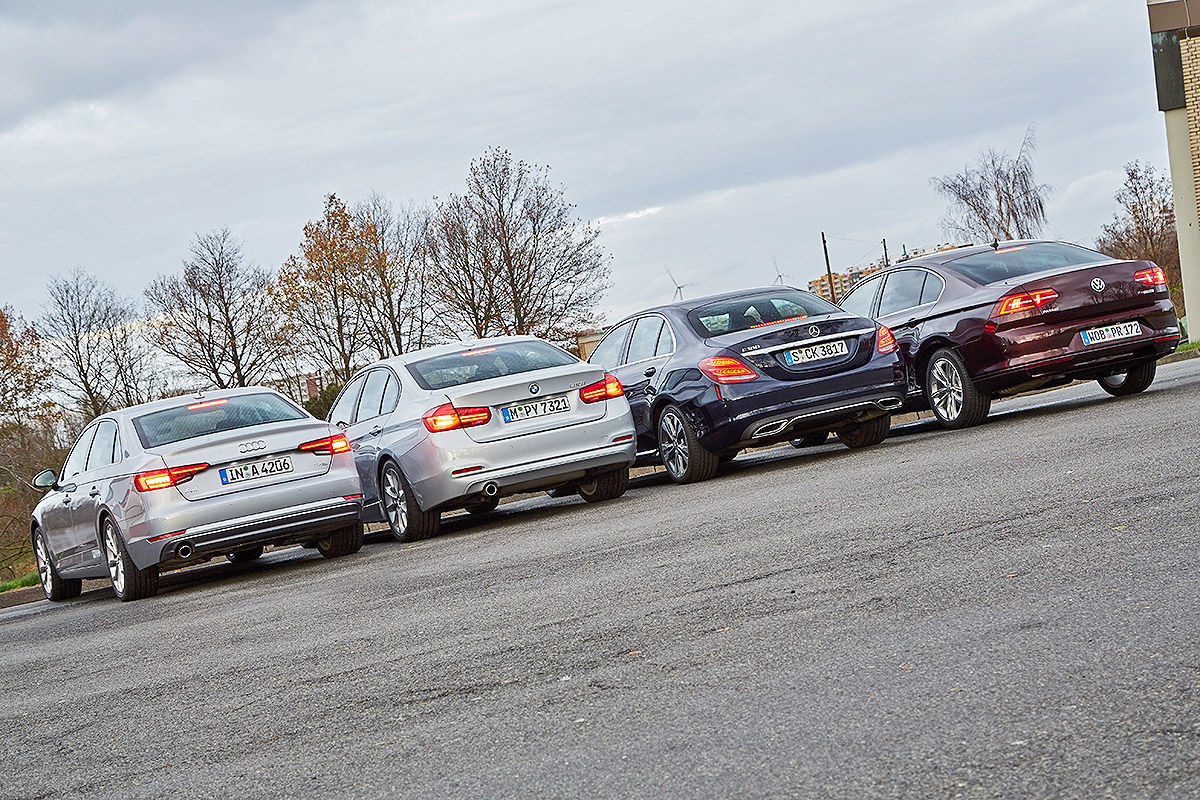 Verdict
The Passat delivers the best blend of comfort, space and (surprise, surprise) agility. Confident and handsome, its A4 cousin is balanced and smooth, too, but its lively engine can’t hide the tight space on offer. For the Benz, comfort is second to none, just like the opulently furnished cabin. The engine is strong but grumpy and the price is high, though. The 3 Series is still the most temperamental car in this company but its puny engine seems out of place here.