Mercedes-AMG GT R joins the cast of Transformers The Last Knight, the newest entry in the popular movie franchise. The role has been confirmed by director Michael Bay himself.

Fresh from its Goodwood reveal, Mercedes-AMG’s top dog, the GT R is already making headlines in Hollywood, where it prepares to start its film career in big fashion. If its humbler sibling, the Mercedes-AMG GT S got a part in Fast 8, the future Fast and Furious installment, the GT R has chosen an even bigger film saga: Transformers.

The GT R will play the Autobot named ‘Drift’, a Samurai-ish robot voiced by actor Ken Watanabe of Batman Begins and Inception fame. In the previous Transformers Age of Extinction movie, the Autobot Drift was portrayed by a black and blue Bugatti Veyron Gran Sport.

Given Michael Bay’s penchant for high octane, CGI-heavy spectacle, the Mercedes-AMG GT R is in for quite a ride, one that should make us, Mercedes’ fans happy. The GT R joins an already impressive cast in the shape of the 2016 Ford Mustang, the 2017 Chevrolet Camaro and a handful of Lamborghini and Ferrari supercars. Transformers The Last Knight will premiere next year, on June 23rd. 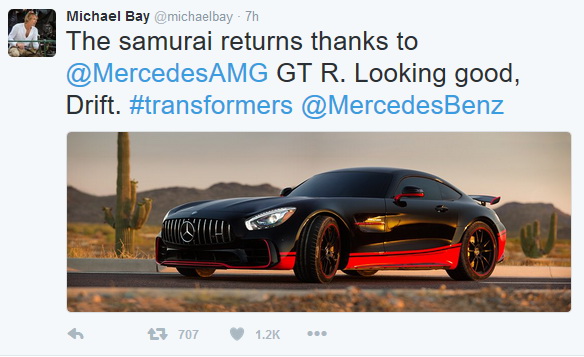