Some just don’t have the sense of money. Not the common sense either, we’d dare say. A New Yorker is selling his old Mercs. And the story seems perfectly normal for the moment. But the man is asking for $300,000 for both of them. You must know that no, they are not classic automobiles.

Too new to be classics and too old to be new, two W140-generation Mercedes-Benz S-Classes are being sold on eBay for the staggering price of $300,000, just as much as you would pay today for a brand-new AMG S63 S. 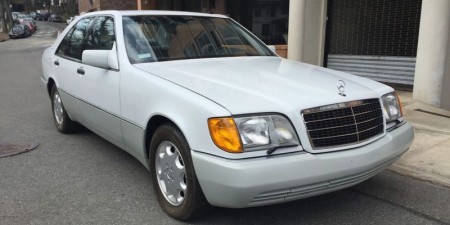 As shown in a report from Yahoo news, a black 600SEL from 1992, with 1499 miles, together with a white 1994 400SE with only 277 miles are the cars causing a stir on the internet. According to the low-mileage figures and looks, the black and white Yin and Yang automobiles seem to be brand-new. But the papers say different. The New-York-based man trying to sell them for the incredible price claims that he has been storing them like the crown’s jewels, in a climate controlled garage. That and the plastic covered leather interior are probably what getting his hopes up to a way too optimistic height, actually.

The long-wheelbase 600 SEL propelled by a V12 and the 400SE powered by a 4.0-liter V8 must have cost approximately $220,000 when new, over 20 years ago. But for the moment, none of the solid sharp angled limousines is a car that would make the collectors’ heads turn.