It was a fantastic race for Mercedes-AMG PETRONAS in the United States. The two drivers finished just like they started: Lewis Hamilton got his 50th Formula 1 victory, as Nico Rosberg followed close behind. The German is still the championship leader.

The lights went out and Hamilton flashed ahead, but teammate Nico Rosberg dropped to third, as Ricciardo flew past him, right under the eyes of the “300” star, Gerard Butler, a guest of the Red Bull squad. 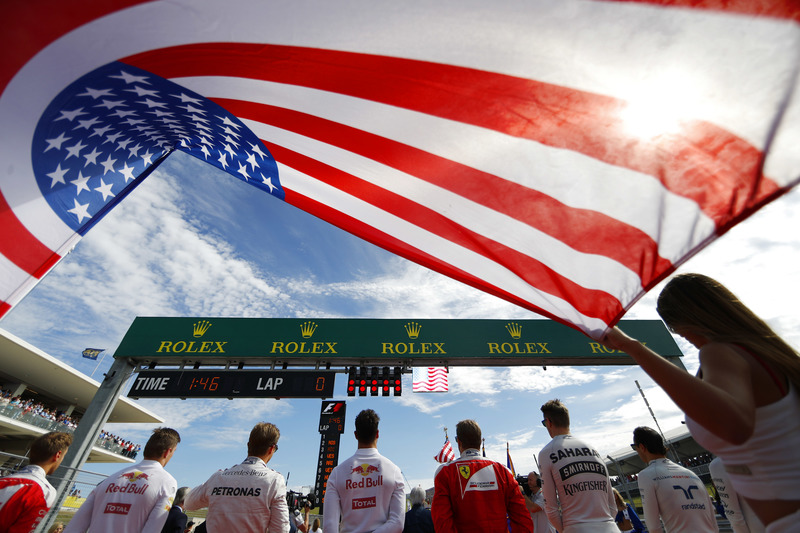 The Red Bull drivers change tires first, in the 10th lap already. Nico Rosberg was pushing to gain time on the racetrack. He went in and out on medium tires, behind Ricciardo and right in front of Kimi Raikkonen. Hamilton was called to the pits first, but refused to go. He eventually changed to softs next lap. Ricciardo seemed light years behind. With Nico’s failed start, Mercedes needed to shift strategy and got the only driver among the first 10 on medium rubber. 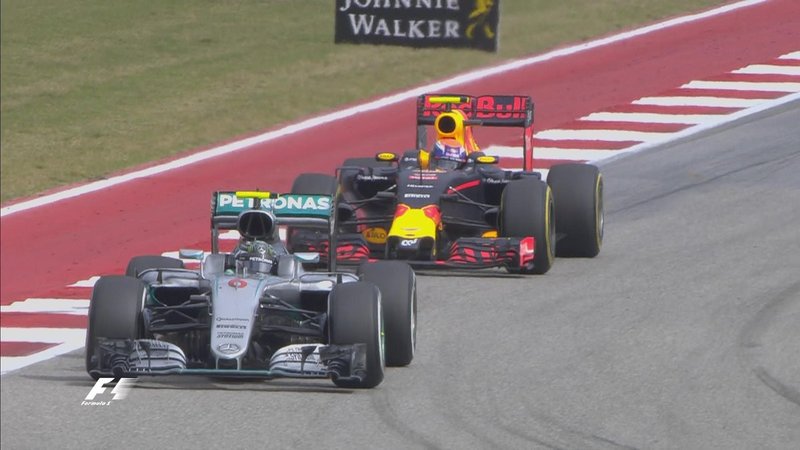 Lap 13 saw quite a battle between Max Verstappen and Kimi Raikkonen, with the Flying Dutch flying ahead. The young driver, running on softs, went straight into Rosberg’s back. The German was sandwiched by the Red Bull racing cars.

In lap 20, Max Verstappen was told to look after his tires. “I am not here to finish fourth”, replied the teenager who had got two second places for the past two races. But he fell behind and Rosberg was chasing Ricciardo. Teammate Verstappen got in trouble at the pits, as he went in to change without even being called to do so. “I thought you did”, he apologized. 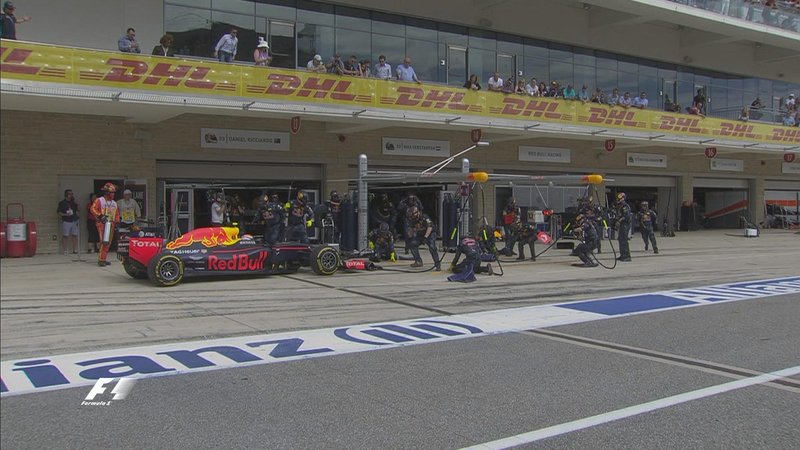 The Ferrari drivers were at each other’s throats on the racetrack, but the Finn went into the pits. Just when Rosberg seemed to close in on him, Ricciardo did the same to take the medium rubber hoping to keep them all the way to the end.

In mid-lap, Verstappen suddenly started crawling, reporting an engine problem. Shockingly, no yellow flags showed up. The Dutch eventually pulled on the side, the race was over for him. The Mercedes drivers took advantage of the presence of the Virtual Safety Car and both pitted for new tires. Rosberg was just inches away from a penalty, trying to go past Wehrlein when coming back on the racetrack, but he remembered the regulation. Ricciardo was angry for the Mercedes free pit stop and said words that can’t be written. 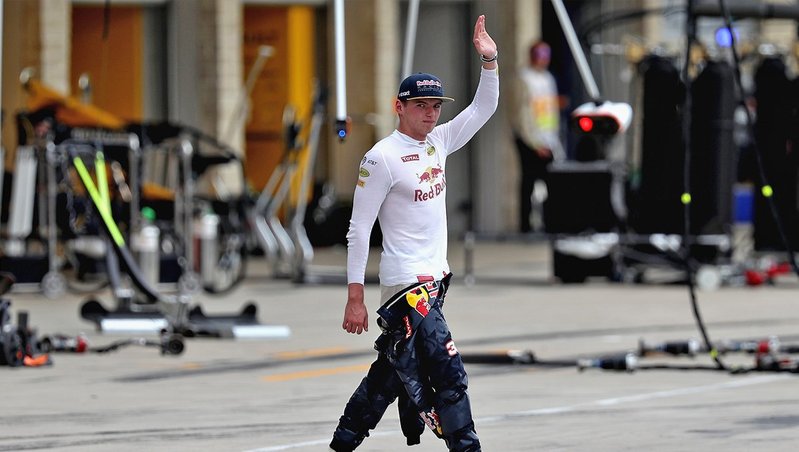 Raikkonen went in to change tires, but it took way too long for his mechanics. Right outside the pitlane, he stopped. Never seen in Formula 1, the Finn reversed for more than 30 meters, just to avoid the presence of the crane in a very risky area. 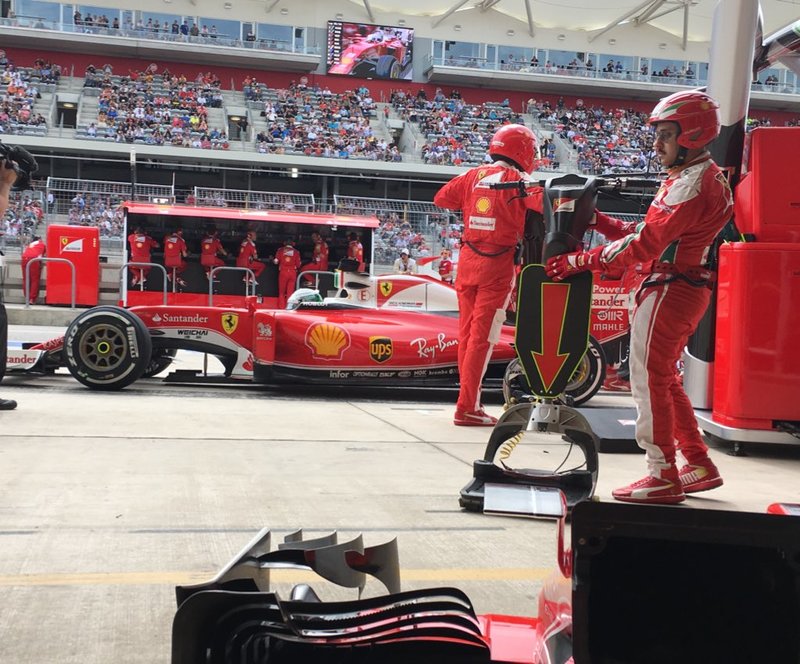 With Ricciardo on his tail, Rosberg upped his pace. There were 8 laps to go and he was 8 seconds ahead of the Aussie and 8 behind Lewis Hamilton , eating up the gap between him and the Brit. But it was too late for him and the 3-time world champion won for the third time in the US. Red Bull’s Daniel Ricciardo finished on the last podium position. Up there, the miss sent by Toto Wolff to take the constructor’s trophy had quite a bath up there, with all the three drivers showering her with champagne. 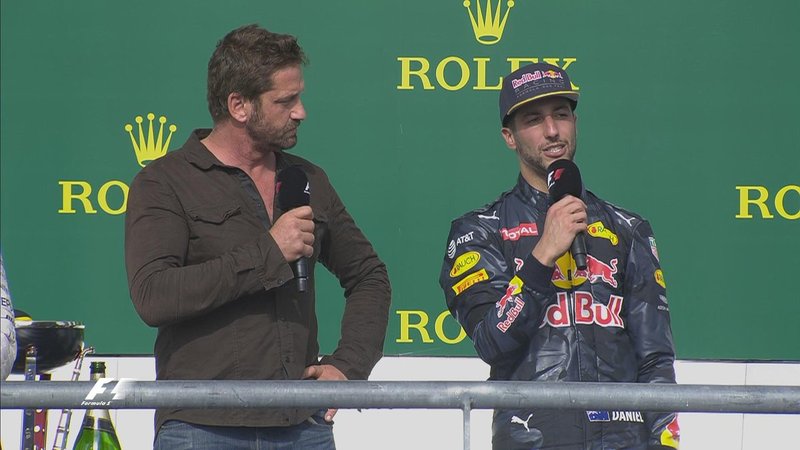 Actor Gerard Butler did the interviews and he thought he would escape Ricciardo’s invitation of drinking champagne from his shoe. “I know Mr. Butler doesn’t drink alcohol, so I prepared some energy drink.” So the “300” hero dined in hell once again…

Nico Rosberg is still the leader of the championship, 26 points ahead of Hamilton. Next stop is Mexico.