Nico Rosberg and Lewis Hamilton are at each other’s throats after the Chinese Grand Prix. “You have compromised my race!”, the German told the Brit, right soon after getting off his car. “It’s not my job to look after Nico’s race”, was the champion’s harsh reply.

Mercedes AMG Petronas needs to solve this behind closed doors and needs to do it really quick, because their drivers are fighting in public. Nico Rosberg let it all out at the post race conference in China. 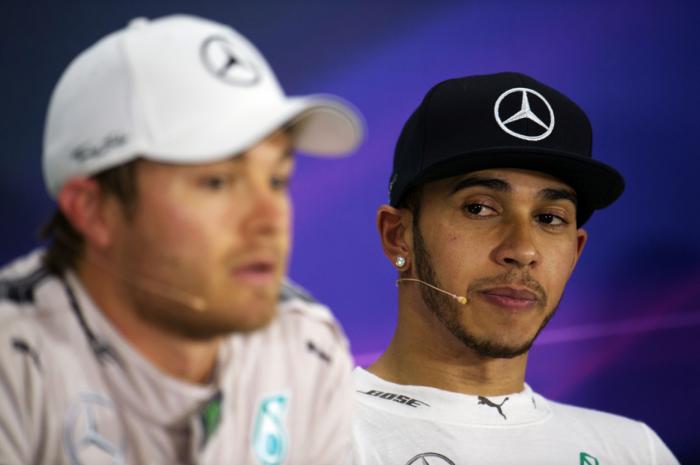 “It is interesting to hear it from you, Lewis, that you were just thinking about yourself with the pace in front. Unnecessarily, that was compromising my race, because driving slower than was necessary in the beginning of stints meant that Sebastian was very close to me and that opened up the opportunity for Sebastian to try that early pit stop, to try and jump me. And then I had to cover him.”

“It cost me a lot of race time as a result, ‘cause I had to cover him and my tires died at the end of the race, cause my stint was so much longer. I am unhappy about that.”

– Lewis, would you like to respond? The reporter inquired.

– Not really! It is not my job to look after Nico’s race. My job is to manage the car and bring the car home as healthy and as fast as possible. And that’s what I did. If Nico wanted to get by, he could have tried that. But he didn’t.

Hamilton’s pace made the Mercedes AMG Petronas switch strategy and called Nico Rosberg in first for the second pit.

“Hamilton is driving very slowly. Tell him to speed up. If I go any closer, I destroy my tires, like the first set. That’s the problem”, Nico told through the team radio, while he had Ferrari’s Sebastian Vettel breathing down the back of his neck.

“Ok, Lewis, pick the pace up a little pit”, was the team’s immediate reaction.

Soon after leaving the racetrack, Nico Rosberg took it to Facebook. He answered to the fans that asked him questions on his profile:

– Why didn’t you attack Lewis, if you say he was too slow?

– Maybe it is difficult to understand from outside. I did try to attack him in the first stint, it just didn’t work, all I did was destroy my tires.

Rosberg believes that his fuming relationship with his teammate is only constructive criticism.

“Lewis had pole position and controlled the race from the beginning to the end. There’s nothing more to say. There’s no need for a quarrel”, said Niki Lauda, the Mercedes non-executive chairman. “True, Lewis will drive selfishly. These guys are egocentric bastards and it is the only way to win the championship. Nico is as nasty as Lewis if he sees the chance. Don’t worry”, he added.

But apparently, there are reasons to worry inside the Mercedes squad.

Toto Wolff, the Mercedes AMG Petronas head of motorsport, offered a less spicy explanation: “We had a good debrief. It was positive. There wasn’t any animosity. We didn’t make any mistakes. It was good of Nico to complain and it was good of Lewis to slow down. Lewis had the car in the lead, he was in charge of the race.”

Animosity or not, this is rivalry pushed to the limit and it’s great for the show. See you next week in Bahrain!