Nico Rosberg is furious after the race in Austria. He got overtaken and collided with teammate Lewis Hamilton in the last lap and then got penalized for the incident. “It was absolutely brainless”, said the Mercedes-AMG motorsport chief, Toto Wolff, after the incident. Wolff is now thinking team orders to avoid incidents like that.

It seems that the two Mercedes-AMG drivers don’t have enough room on the same racetrack! The world champion Lewis Hamilton and the ranking leader Nico Rosberg are at each other’s throats after a new clash in Austria. On the Spielberg circuit, the Brit and the German ran another battle of their never-ending war and the team lost precious points.

“I had the win in the bag, I was convinced I’d win and to lose it like that, in the last lap, especially in those circumstances, it’s a tough one. Lewis took me by surprise and turned in. I couldn’t react and we collided, which was devastating.” 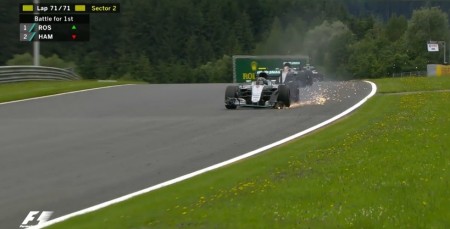 “I got penalized from the stewards for the incident. They gave me the blame, which sucks. I respect that, but I have a different opinion.” Nico Rosberg filed a complaint that Hamilton overtook while the yellow flags were waved.

Rosberg also got a 2-point penalty on his driving license for continuing the race with a badly damaged car.

It was the second time the Mercedes-AMG PETRONAS drivers collided in the past five races. They crashed out of Barcelona GP soon after start. “I thought they had learned their lesson. I am fed up with trying to analyze it. We now look like a bunch of idiots. I don’t want a contract, but if racing is not possible without a contract, that is a consequence”, Toto Wolff threatened.

Booed on the podium, Hamilton reacted to the spectators: “It’s not my problem, it’s theirs!”, the Brit said.

Rosberg still leads the 21-race championship after Sunday’s grand prix, but his advantage over Hamilton is now just 11 points.