This smart Forrail is forreal

The whole point of trains is to be able to move a lot of people quickly and safely, without the worries of congested traffic or air pollution – in the case of electric trains, at least.

If that’s the brief definition of railroad transportation, then turning a smart forfour into a vehicle that goes on rails makes absolutely no sense, since it would cancel all the afore mentioned advantages. Still, the smart Forrail exists so somebody obviously must have thought that investing a serious amount of effort into this project was worthwhile.

That someone is called Interfleet, a British company whose train engineering specialists took an ordinary smart Forfour and turned it into what has got to be one of the smallest trains to ever exist. The transformation process was not as straight forward as you might think, taking those involved no less than six months to turn the car into a smart Forrrail – or what they call “a fully certified mini-train”.

In order to run on rails, the smart Forrail needed a different set of wheels – they came in the form of solid steel 22 inch discs weighing 80 kilograms in order to offer enough traction. You have to wonder what modifications the engine and transmission must have gone through to be able to turn those massive wheels, but there’s no information regarding this aspect. 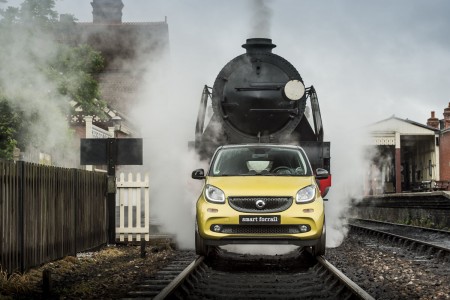 As you might expect, the steering was disconnected and aluminium supports were welded between the axles to ensure the wheels will remain straight at all times. We don’t know how fast the smart Forrail travelled, but we do know it wasn’t fast at all. It went for a ten mile (16 kilometers) ride with a licensed train driver on board and careful supervision of the railway staff at all times.

When the publicity stunt – because that’s what it was – was all over, the car was turned back to its original state since the process was completely reversible.