This is W12, the car Mercedes-AMG Petronas hopes will bring them the 8th consecutive title

Mercedes-AMG Petronas has just revealed the W12 at the factory in Brackley. It is the car the team hopes to get its 8th consecutive world championship title.

The Mercedes-AMG F1 W12 E Performance. This is the full name of the 2021 racing car that Lewis Hamilton and Valtteri Bottas will drive during this season. It is the first car to get the “E Performance” designation. It will also show up on all forthcoming Mercedes-AMG performance hybrid cars. The AMG logo replaces the star pattern. The most prominent color remains the iconic green of Title Partner PETRONAS on the front and rear wings, nose, mirrors and halo. Parallel green and silver stripes, symbolizing more than a decade of partnership between Mercedes and PETRONAS, show up on the flanks of the car. 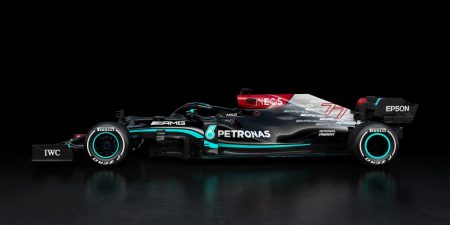 It gets the already proven technology of its predecessors, but also considerable aerodynamic changes, especially to the floor. A new suspension, cooling system and power unit are also on the list.

The car is the result of long workdays, late nights, tough decisions and tight deadlines. “Every year we reset our focus and define the right objectives,” said Team Principal Toto Wolff. “That may sound simple. But it’s damn hard and is probably why there are no sports teams out there with seven consecutive titles. So many things can happen and it’s very natural to get used to success, and therefore not fight as hard for it.”

For the second season, Mercedes chose to keep the black base livery, as a commitment to improving diversity and inclusion.

The W12 will hit the racetrack for the first time on 12th of March, on the opening day of pre-season testing in Bahrein. 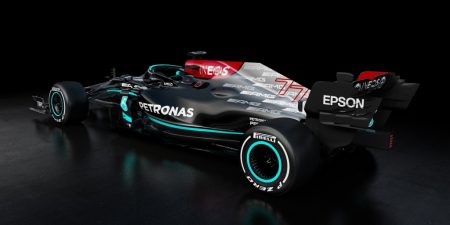 The new regulations permit the cars to be 6 kilograms heavier. The DAS has been banned, therefore the engineers were busy complying with the new standard for the development of the Mercedes-AMG W12.

Teams receive more or less access to the aerodynamic tools depending on their championship position. Therefore, because of the Championship title last year, Mercedes gets 22% less access in 2021 compared to the last-placed team.

Pirelli is bringing a new, more durable tire to the track. “It is slower, but consistent”, Technical Director James Allison says.

Starting 2021, teams will only be able to change a single performance specification of hardware throughout the season.

The F1 engines will now get E10 fuels.

This season is the first that comes with cost caps. The budget of all F1 teams must not be in excess of $145.