Vladimir Putin started sending a patriotic message several years ago, when he ditched his Mercedes-Benz S-Class armored limousine. He had been planning it for years to prove that Russia can indeed make cars. In 2018, the president switched to the Russian-made Aurus Senat.

With the war in Ukraine that Russia started, uncalled for and unprovoked, the world is watching every move Vladimir Putin makes. People are tracking the presidential air fleet, his flights to the Ural Mountains, his meetings, while his yachts don’t move an inch without being exposed to risks such as protests at sea or even seizing.

But there was a time when Putin (and the Russian oligarchs) needn’t worry about all these. Back then he was traveling in an armored. And he had several of them, starting with a W140 from the mid-1990s. 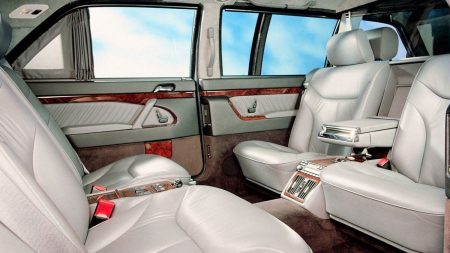 The dictator from Kremlin enjoyed the presence of four executive armchairs with a face-to-face layout on board. A center console divided the two forward-facing seats. A built-in fax machine, telephone, and entertainment system control were there, at the tip of Putin’s finger.

There was the company’s famous 6.0-liter V12 under the hood of the 1995 W140. It delivered 394 PS to all four corners. When it sold, back in 2016, this car had 25,000 kilometers (15,534 miles) on the odometer. Measuring 6,228 mm (245.2 in) in length and weighing above the 4.5 tons mark, the armored model featured the highest level of protection a civil vehicle could have. It reportedly came with an air tank that would deliver air into the cabin in case of a chemical attack. It also featured run-flat tires, that allowed it to drive with all four tires punctured.

The Mercedes-Benz S 600 Guard sported a special communication system, with protection against interceptions and interference.

Six years ago, the already model went up for sale in Germany, on mobile.de, with a whopping price of $1.3 million. Info on the buyer has never been disclosed. We completely understand today why it is better for him to remain anonymous.

After several Mercedes-Benz and Rolls-Royce limousines, the Russian dictator went for a Russian-made car. He revealed it on its fourth inauguration day  But the design of the Aurus Senat found inspiration in Rolls-Royce, Bentley, Chrysler and Maybach.