This is the Mercedes-Benz EQV fully electric van: First official pics and info

Mercedes-Benz has unveiled the production variant of its first-ever fully electric van, the EQV. The EQV is making its public debut at the IAA Frankfurt motor show, next month (12 to 22 September). Its electric range? 405 kilometers!

The arrival of a fully electric V-Class was clearly just around the corner, after Mercedes-Benz unveiled the Concept EQV in Geneva earlier this year. Now it’s time for the production-ready version of the electric V-Class to debut and the EQV moniker has been retained. The EQV joins the Mercedes-Benz electric portfolio consisting of, for example, the EQC, but also the eVito and eSprinter.

The electric drive train (eATS) of the Mercedes-Benz EQV is situated on the front axle. The 150 kW or 204 hp electric motor is coupled to a transmission with a fixed gear ratio and gets its energy from a 100 kWh lithium ion battery mounted under the floor of the vehicle – of which 90 kWh is usable capacity. The 5.14 meter or 5.37 meter long (two different wheel bases available) premium EV van achieves a maximum speed of 160 km/h.

The driving range of the MPV clocks in at a respectable 405 kilometers. Still feel the range anxiety? The Mercedes-Benz EQV can be charged from a DC fast charging station using the series-standard CCS (Combined Charging Systems) with a maximum power of 110 kW. Hence, in only 45 minutes, the Benz sees its battery percentage rise from 10 back to 80 percent SoC (State of Charge). Mercedes-Benz EQV is equipped with a water-cooled on-board charger (OBC) with a capacity of 11 kW. 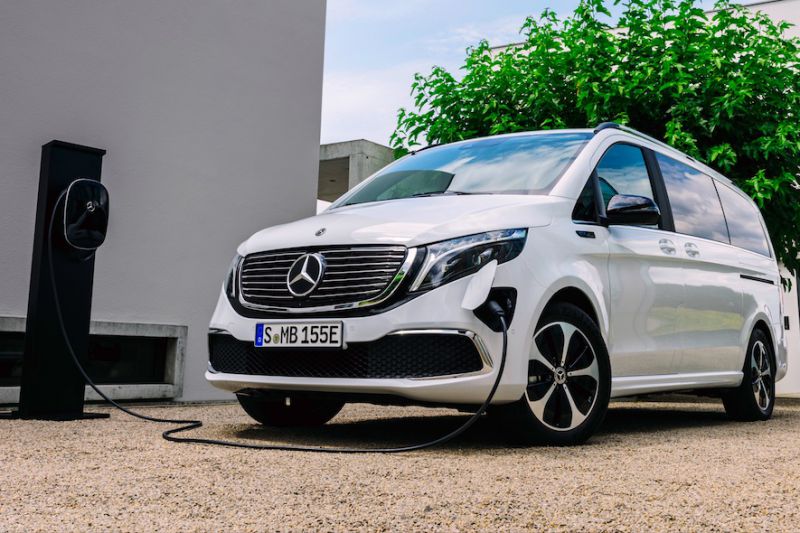 The Mercedes-Benz EQV also charges its batteries when on the move. When accelerating or braking, the mechanical rotation is converted into electrical energy and used to charge the high-voltage battery (recuperation). The paddle on the left increases the level of recuperation, the paddle on the right reduces it. The recuperation level D Auto and the ECO Assistant combine navigation data, road traffic sign recognition and information provided by the intelligent safety assistance systems (radar and camera), and adjusts the level of recuperation itself. In the E+ driving mode, the active range monitoring ensures that the driver reaches the destination safely even if a charging stop is missed.

On the outside, the Mercedes-Benz EQV differs from a regular V-Class thanks to a modified front end which sports, among other things, a closed and partially illuminated black panel radiator grille with chrome fins and a new front bumper. The charging port is hidden behind a flap carved in that new front bumper.

The Mercedes-Benz EQV is available with different interior layouts, all adorned with warm accents such as rose gold which complements the midnight blue leather appearance. For example, six passengers can be transported on individual seats, but there is a also a format with rear bench seats available, which means that the car can also transport 7 or 8 people. The trunk can accommodate 1,030 liters of luggage.

Furthermore, the EQV naturally features the latest version of the expanded Mercedes-Benz User Experience – MBUX multimedia system with intelligent voice control with natural language comprehension, although the screen is not as wide as in, for example, the current A-Class and B-Class. The 10-inch touch screen controls the navigation, the Mercedes me Charge functions and the driving modes and is characterized by the specific EQ tile in the main menu.