Two pictures and that was it, you thought it was all over until the world premiere of the Mercedes-Benz C-Class Cabriolet? The Stuttgart grand brand says it is just the beginning. The company is showing off its convertible, due to be presented on February 29, in a breath-taking video.

They show off, but they don’t show much of the car that guarantees four-season driving pleasure! A diamond grille with a single louver and a massive star logo in the center of it, gaping intakes and the soft top that we already knew about are the only details revealed in the 20-second clip.

The convertible is set to join an exclusive entourage made up by the smart fortwo cabriolet, the SL, the SLC and the AMG S 65 Cabriolet.

A C 300 version will likely be revealed first, sporting a 2.0-liter 4-cylinder engine developing 245 HP. But the brand is saving the best for last. The Mercedes-AMG C 43 and C 63 versions will follow shortly with a power boost under the hood: the 3.0-liter V6 roaring out no less than 367 HP and upgraded chassis performance for the mid-level C 43 and the 4.0-liter biturbo V8 boasting roughly 510 HP for the performance-oriented C 63. A C 350 Plug-In version is also expected to show up later on.

The C-Class Cabriolet comes with a soft top, unlike its convertible rival, the BMW 4 Series, but similar to the open-air Audi A5.

The first ever convertible set to bear the C-Class badge will show up online in all its glory in 9 days from now. The Cabriolet will have its public debut e on the 1st of March in Geneva and is going to hit the showrooms next autumn.

Update: Something tells that this car is not going to wait for its due date. Yet another teaser photo has been revealed. The full rear side of the C-Class Cabriolet together with a headrest came out from under the wraps in a black and white photo. Officially, there are 8 days left to its public debut. Virtually… can it wait that long? 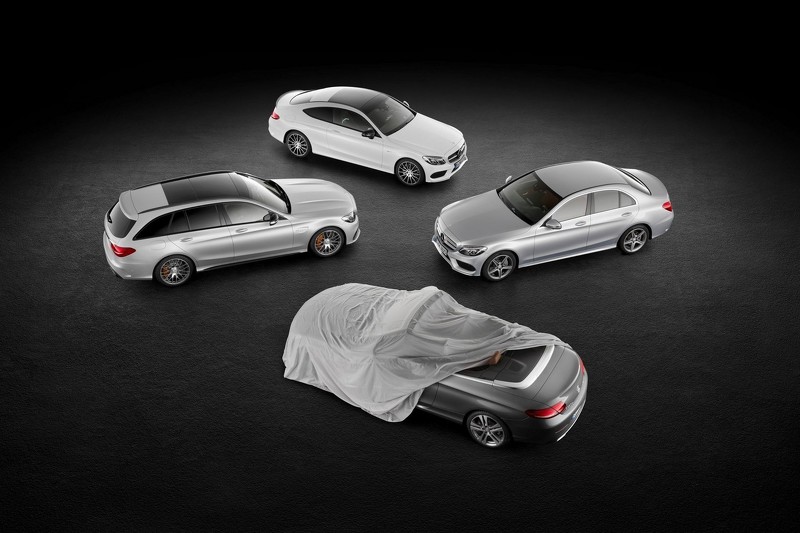