This is it! Mercedes-Maybach G 650 Landaulet leaked

Mercedes is bringing an ultra-luxury G-Class convertible to Geneva: the Mercedes-Maybach G 650 Landaulet with a V12 engine and 630 hp. First pictures and video!

This morning Mercedes regaled his Facebook followers on a mysterious picture of a seemingly open G-class. The car turns even more eccentric than expected. The Mercedes G-Class Cabrio was leaked!

Shortly after Daimler had published a teaser image of the open G 650, a photo and a video appeared on Instagram. The material shows that the new Mercedes is a Landaulet – because the roof can only be opened above the rear half of the car. It appears not to ‘just’ to a G convertible, but an extra long drop-top version. A real Landaulet! 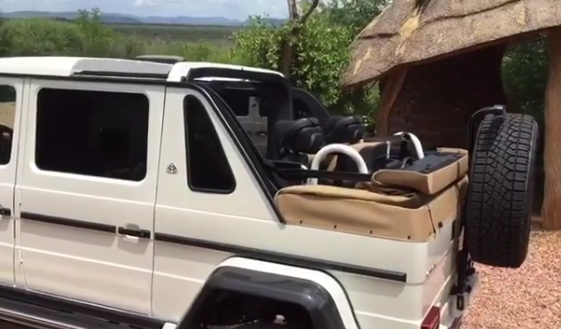