This is it! 2017 Mercedes E-Class revealed, almost camo free

The wait is over! We are proud to reveal the 2017 Mercedes E-Class almost camouflage free, two months ahead of its planned January debut at the Detroit NAIAS motor show.

This is certainly not the first time the all-new 2017 Mercedes E-Class has been teasing its sensuous lines. What the new batch of spy pics show for the first, though, is the definitive design details of the new sedan, including the precise shape of the grille, headlights and tail-lights.

The front air intakes are the only covered bits. Mercedes plans two distinct front-end treatments. A traditional chrome grille is set to adorn the basic models with a more sporting blade grille reserved for the sportier Avantgarde line, shown in the spy photos.

The tail lights shape is also clearly visibile aping the S-Class in their positioning. The LED units can adapt to ambient lighting and reduce or increase their brightness accordingly to avoid blinding the drivers behind.

Underneath the all-new 2017 Mercedes E-Class sits the MRA modular platform, slightly extended compared with the smaller C-Class for superior interior space. Thanks to this new platform, which consists among other things of aluminum, the E-Class will lose quite a few kilograms with the total weight of the model said to top a maximum of 1.5 tonnes. 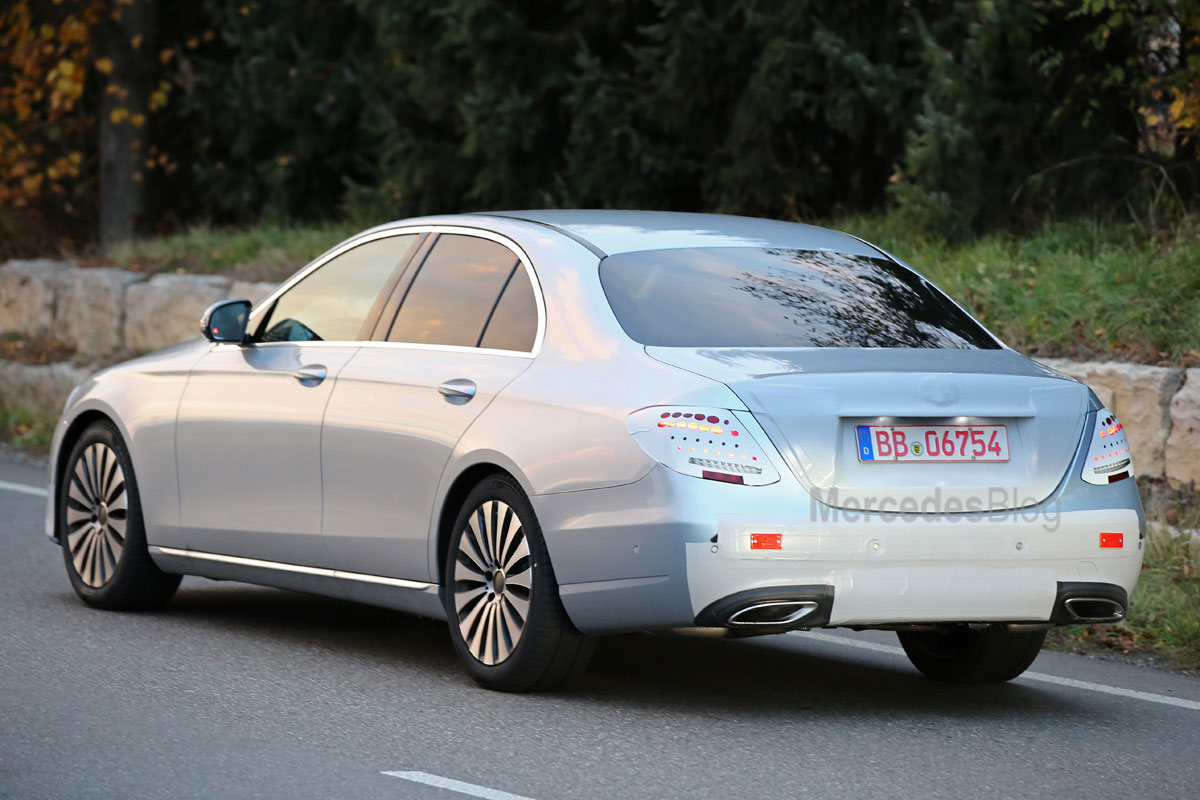 2017 Mercedes E-Class will be the first Benz to feature a new range of engines developed on the modular principle as three-, four-, and six-cylinder units constructed from a multiple of identical 0.5-liter cylinders. A new family of 3-liter twin-turbo inline-6 engines, codenamed M256, will make its first appearance alongside the new E-Class, while an all-new generation of diesels (OM654) are set to replace the current OM 651 range. The all-new 9G-Tronic nine-speed automatic transmission will also feature prominently in the line-up. Another highlight will be the plug-in hybrid version.

Commercial debut is slated for first semester 2016 with the official unveiling already set in stone for the 2016 Detroit motor show, next January.