There is more to the Mercedes-AMG GT R beast than a pretty face and a V8 with a twist of power. We have watched it coming down from the sky, trapped in a container at Brooklands, UK, than eating up the road while Lewis Hamilton tried to tame it. We have seen every inch of it time and time again. And yet, there are secrets yet undisclosed.
1. It took two years to finish the GT R’s patented active underbody aero system. Countless tests and tries led to this: system that reduces front drag and lift, increases air speed under the car, decreases pressure and does that all without affecting the rear end’s aerodynamics. “It’s the masterpiece of the car,” says head of aerodynamic development division of AMG, Gustavo Estrada. 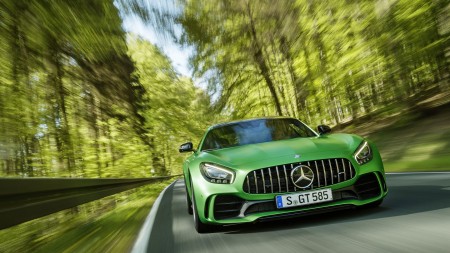 At a speed of 80 km/h in RACE mode, a carbon component, weighing only about two kilograms, automatically moves downward by about 40 millimeters and changes the airflow considerably. This process results in what is known as the Venturi effect, which additionally “sucks” the car onto the road and reduces the front-axle lift by around 40 kilograms at 250 km/h.

2. The GT R’s trademark “Panamerica” grille should be terrible for aerodynamics. But Estrada and his team tapered the profiles of the grille’s bars to force air into the radiators, and there is next to no air recirculation in the engine compartment.

This unique feature also comes from the world of motorsport and is celebrating its standard-production première in the AMG GT R: Its 15 chrome-plated vertical fins recall the look of the new AMG GT3 racing car.

The basic form of the new radiator grille goes back to the Mercedes‑Benz 300 SL racing car that won the legendary Panamericana road race in Mexico in 1952.

3. The GT R’s front active air shutters can open and close in about 1 second. Which is very fast and also very important, because it means the shutters stay open only when they need to. They are electronically controlled and can be opened and closed in around a second by an electric motor, to improve the airflow and consequently the aerodynamic performance.

The louvres are normally closed ‑ including at top speed, during braking and when cornering at high speed. 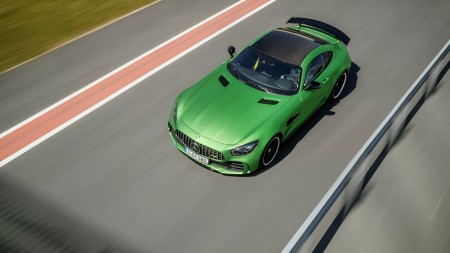 4. The videos broadcast for the world premiere of the Mercedes-AMG GT R and before it was shown, were shot in Thailand, at Lake Como, Italy and in the „Green Hell” of Nurburgring. The tropical forest that shows up in the video was located in South Asia, but easy to guess, the racetrack is the place where the GT R and most of the Mercedes-AMG super cars where born, Nurburgring.

5. A Black Series version is rumoured. Speaking at the world premiere of the GT R at Goodwood Festival of Speed in Brooklands, England, the Mercedes-AMG Chairman Tobias Moers fuelled rumours of an even more ferocious GT.

“We’re not done with the Black Edition yet”, he suggested.

The fierce green beast will go on sale on November 21st and the market launch in Europe begins in March 2017.