They got it all wrong! So who won the Austrian GP?

Lewis Hamilton wins the Austrian Grand Prix. No, wait, what?!? It was Nico Rosberg to win in Spielberg. An Austrian magazine got it terribly wrong.

“Hamilton Wins in Spielberg” was the title on the cover page of the Red Bulletin magazine, that came out on Sunday morning, right before the race, 24 hours after Lewis Hamilton had got his seventh pole position in eight races this season. 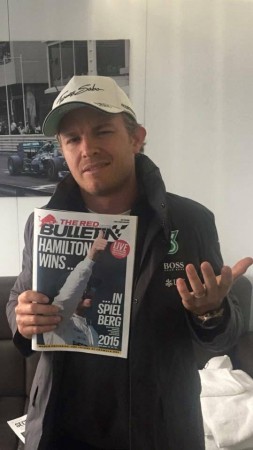 Nico Rosberg got his hands on the magazine and he was slightly amused by the cover displaying his teammate in Mercedes AMG Petronas as a winner of the race he had just won. He couldn’t believe his eyes and felt like yesterday’s victory was just a dream. But don’t worry, Nico, it was as real as it gets. It was the German’s 11th career victory and his 3rd of this season. Right after the first corner, Hamilton settled into the second position and would not let go of it until the very end.

The confusion started up on the podium, right after the Austrian GP, actually. The man conducting the interview, the former Austrian Formula One driver Gerhard Berger, told Nico: “Well done, Lewis!”. The German replied with a sense of humour: “I am Nico, but it’s easy to confuse us!”