WORLD PREMIERE! There comes the sinister beast – Mercedes-AMG Project ONE

Mercedes-AMG has just revealed the most sinister perilous beast that the company has ever built: the Mercedes-AMG Project One. The car made its way onto the stage of the Frankfurt Motor Show, driven by someone who is worthy of it: the Formula One triple world champion, Lewis Hamilton. So, ladies and gentleman, this is how the monster looks!

The Mercedes-AMG ONE is the transfer of the Formula 1 technology onto the road, the very anniversary year of the powerhouse. The high-performance two-seater super sports car is said to produce over 1.000 horsepower and hit a top speed of over 350 km/h.

It has been a teamwork of the Affalterbach-based company with the engineers at the Mercedes-AMG High Performance Powertrains in Brixworth and with the Mercedes-AMG Petronas Motorsport team in Brackley. They joined forced to provide an insight into the future performance-hybrid drive strategy of the sports car brand within Mercedes-Benz.

The high-performance plug-in hybrid drive system of the monster conceived on the racetrack lies in the turbocharged engine and the four electric motors, one integrated in the turbocharger, another installed on the combustion engine linked to the crankcase and number three and four driving the front wheels. 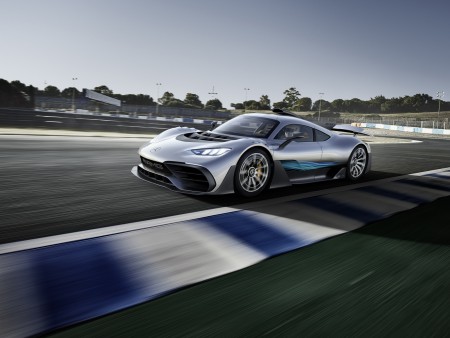 The 1.6-litre V6 hybrid petrol engine with direct injection and electrically assisted single turbocharging comes directly from the Mercedes-AMG Petronas Formula 1 racing car. The four overhead camshafts are driven by spur gears. To achieve high engine speeds, the mechanical valve springs have been replaced by pneumatic valve springs. The vehicle is mid-engined (with the unit located ahead of the rear axle), with the redline somewhere around11,000 rpm, which is currently unique for any roadgoing vehicle. However, for higher longevity and the use of commercially available Super Plus petrol instead of racing fuel, it remains significantly below the F1 engine speed limit.

The electric motors on the front axle are also make rev miracles, with the rotor revolutions up to 50,000 rpm – beyond the current state of the art of 20,000 rpm. A high-tech turbocharger assists the high-revving engine. 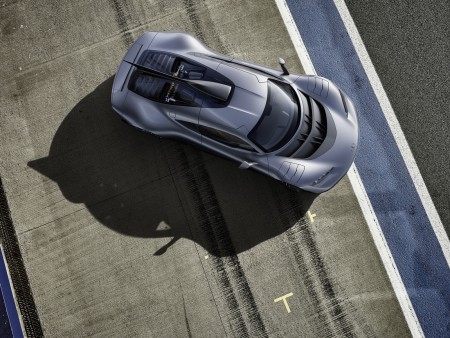 Such a system completely eradicates the highly dreaded turbo lag, to make response times as short as possible, even shorter than that of a naturally aspirated V8. The electric turbocharger uses parts of the surplus energy from the exhaust system to generate electricity, and either stores it in the high-voltage lithium-ion battery as part of recuperation or provides additional drive power by feeding it to an additional electric motor. This motor, producing 120 kW, has been installed directly on the engine and features a link to the crankshaft via a spur gear (MGU-K = Motor Generator Unit Kinetic) – another technology that ensures maximum efficiency and performance in Formula 1.

Two further 120 kW electric motors, each connected to a front wheel, control the front axle fully electrically, also allowing individual acceleration and braking for each of the wheels. The company estimates that this way, up to 80% energy recuperation, that will be stored in the battery for a longer electric range. Each electric motor is controlled by its own power electronics located in close proximity to the electric motors in the floor assembly. 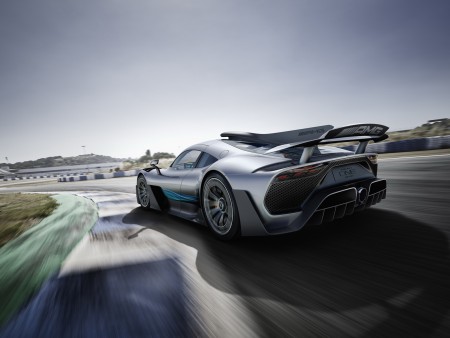 The roadgoing racer sports a completely new automated 8-speed manual transmission that Mercedes has patented recently. Entirely developed from scratch especially for the Mercedes-AMG Project ONE, it is activated hydraulically can be be operated both automatically and manually by shift paddles. The car features a newly developed suspension, with a multi-link structure at the front and rear, with a configuration for balanced, easily controlled and sporty handling behavior, all assisted by the all-wheel drive and torque vectoring.

The beast runs on completely new 10-spoke forged aluminium wheels, exclusively reserved for the super exclusive model, with a a radial carbon-fiber semi-cover with an aerodynamically sophisticated shape for improved aerodynamics and airflow. Besides, each of the spokes bears three ventilation slots. The wheels are shod with Michelin Pilot Sport Cup 2, exclusively developed for the hypercar. 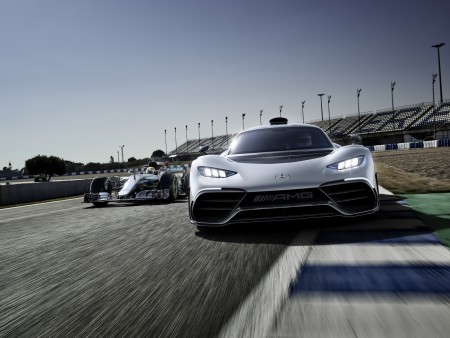 The car breathes aggression through all its pores, but it’s not just the looks, as every part of the fascinating concept holds a functionality purpose. Muscular, yet athletic, the hypercar introduces itself as the coolest the company has ever laid pencils on. Front large aprons, air inlets, a trapezoidal center section with the AMG logo in white and the Mercedes 3-pointed star shining above it characterize the front. The A-wing below the center section creates a silver-colored highlight and the transition into the front wings. Prominent air inlets are impossible to miss. Flat LED headlamps blend into the front contours. The man who signed the paintwork for the Formula 1 racing car did his job once again on the Mercedes-AMG Project ONE. The doors open upwards, guaranteeing that WOW factor. The fuel filler flap is at the rear right, the charge socket for the plug-in hybrid battery at the rear left. 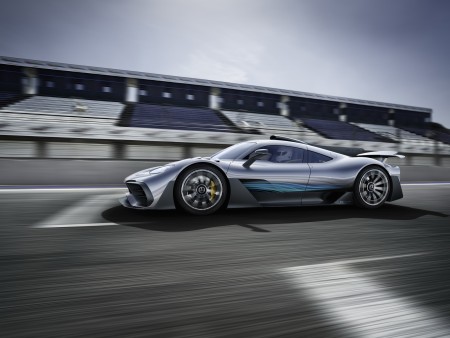 The low greenhouse with an almost spherical structure provides a visual contrast to the clear shapes of the vehicle. An air intake imitating that of the Formula 1 racing cars, used by the engine to intake large volumes or air, dominates the roof line. A vertical shark fin makes this beast looks as if it had the Beauty running all the way back home. The rear window allows a glimpse into the power unit. Two large NACA air inlets ensure optimum guidance of the airflows for the engine and transmission oil coolers located at the rear end. The design of the exhaust tailpipe with its large, round outlet and two small, round apertures, following the exact design and function of those in the Formula 1 cars.

The rear lights feature a layout with three rhomboid lighting elements to echo the graphic design of the AMG brand logo.

The ultimate driving machinery sports an interior with a design just as radical as the exterior, to make racing as tangible as possible for those who have been not instructed as such. The two bucket seats with adjustable backrests are integrated into the monocoque. The pedals and steering wheel are adjustable, allowing the driver to find the ideal driving position. The center tunnel visually separates the driver and passenger areas. 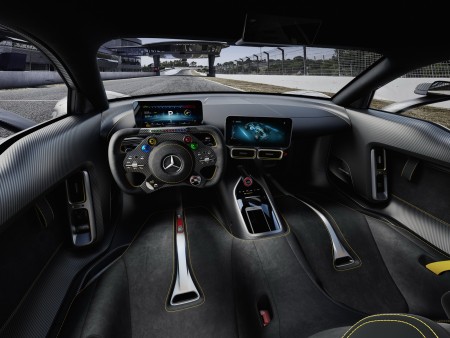 The dashboard gives the sensation that is freely floating. The two high-resolution, free-standing 10-inch displays (one slightly raised in front of the driver, the other on the right of the center console, that also hosts the engine start button, angled towards the driver) are adapted with high-quality and weight-optimized solid metal components. The double-nozzle ventilation unit is suspended right below the center screen like a gondola. The stowage compartment is fitted with a transparent lid.

The steering wheel is pretty much a copy of that held by the 3-time world champion Lewis Hamilton in his racing car, with flattened upper and lower sections. Two integrated controllers can set functions such as the driving modes and suspension setup, or the LED shift display in the upper steering wheel area. 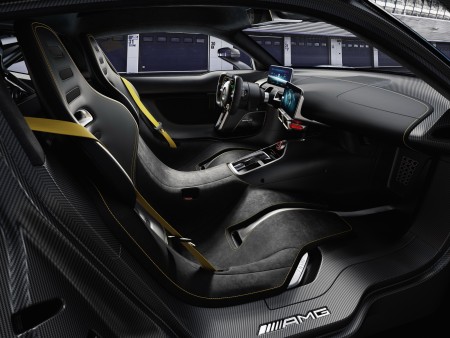 The two-seater boasts an unparalleled functionality, as there are two stowage compartments behind the seats. The COMAND infotainment system ensures optimum connectivity, with the user interface integrated as an autonomous concept. The most important information is displayed on the road in the field of vision above the steering wheel, to cut off distraction. For optimum visibility to the rear, the rear-view mirror is replaced by a screen showing real-time images of the rear from a mirror cam. The aluminium screen housing is fully integrated into the roof, and also holds other controls.

The colors and materials are borrowed from the Formula 1 racing car as much as anything else. There are sculptured racing seats in nappa leather in magma grey, in slip-resistant black microfiber, creating an unmistakable association with motor racing.