The updated 2020 Mercedes E-Class is here: Full specs and gallery

The revised 2020 Mercedes-Benz E-Class has been unveiled online today, following the cancellation of the Geneva motor show. Launched in 2016, the E-Class gets new design elements, the MBUX multimedia system and hybridized power trains.

Mercedes-Benz published the first photos and details regarding the E-Class facelift. For the moment, representatives of the German manufacturer have only offered information on sedan, estate and All Terrain versions. The design changes made by Mercedes-Benz are relatively striking compared to other model updates. Instead of borrowing design elements from big brother S-Class, it is the A-Class Limousine that seems to have served as inspiration for the revised 2020 Mercedes E-Class.

The E-Class features a modified front styling that will now have to do without a ‘classic’ version of the grille and the proud Mercedes logo sitting on top of the engine bonnet. At launch, at least, the E-Class will be available from the ‘Avantgarde’ line upwards, so the big chrome star will be integrated into the grille. As such, the German manufacturer has prepared three lines of equipment: Avantgarde, Exclusive and AMG. 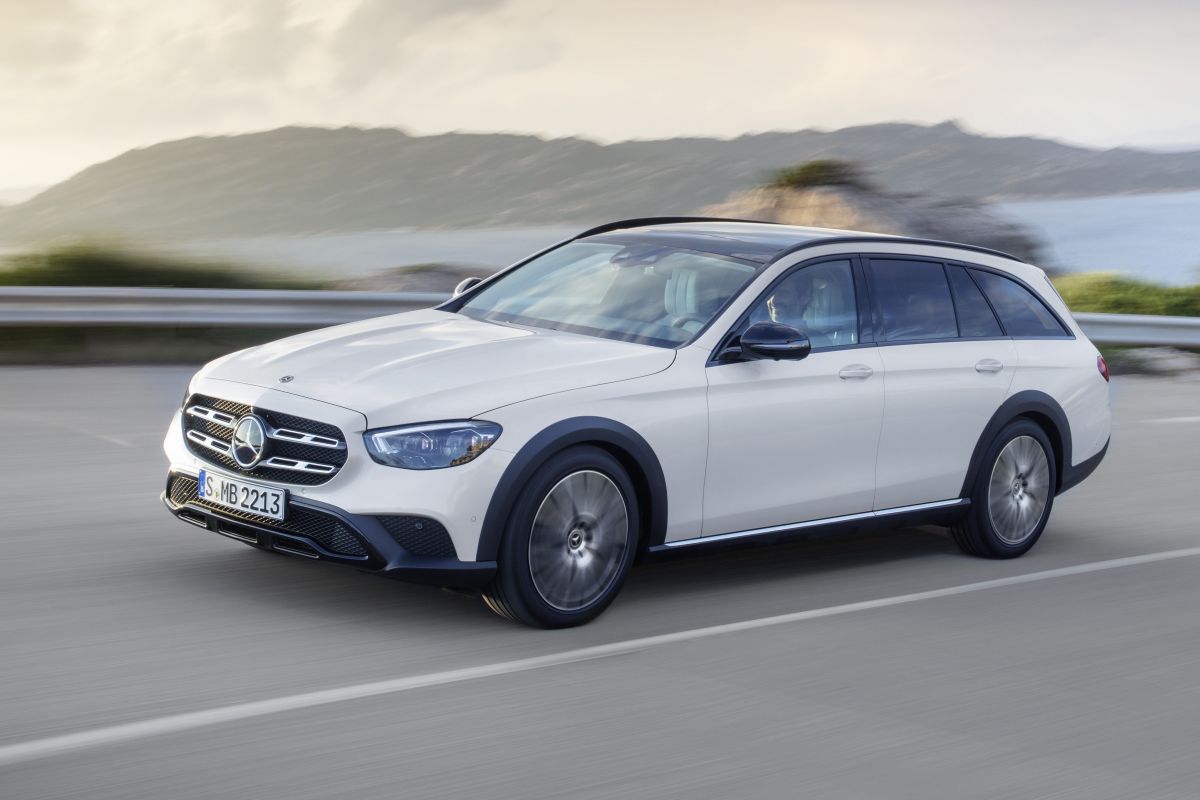 The new 2020 Mercedes E-Class gets new bumpers and flatter, standard full-LED headlights (optional Multibeam LEDs) that bring the E-Class more in line with the younger, more compact models of the brand. The front grille has also received some discreet changes, featuring the Panamericana style. The influences of the A-Class Limousine are also reflected on the rear of the E-Class sedan. Mercedes-Benz now uses horizontal light units that run towards the center of the trunk lid. The E-Class Estate (or T-Modell) instead is updated in a milder manner at the rear. The revised LED layout of the rear light units is particularly striking here. Mercedes-Benz also adjusts the bumper design of the versions optioned with the AMG Line package and brings it more in line with the way the bumpers of the actual Mercedes-AMG models look.

The Avantgarde, AMG Line and All-Terrain variants now all have a bonnet with integrated ‘power domes’. The All Terrain is further distinguished with more chrome-colored details than before. Mercedes-Benz also makes fresh paint colors and new light-alloy wheels available and the interior is also finished with new colors and materials. 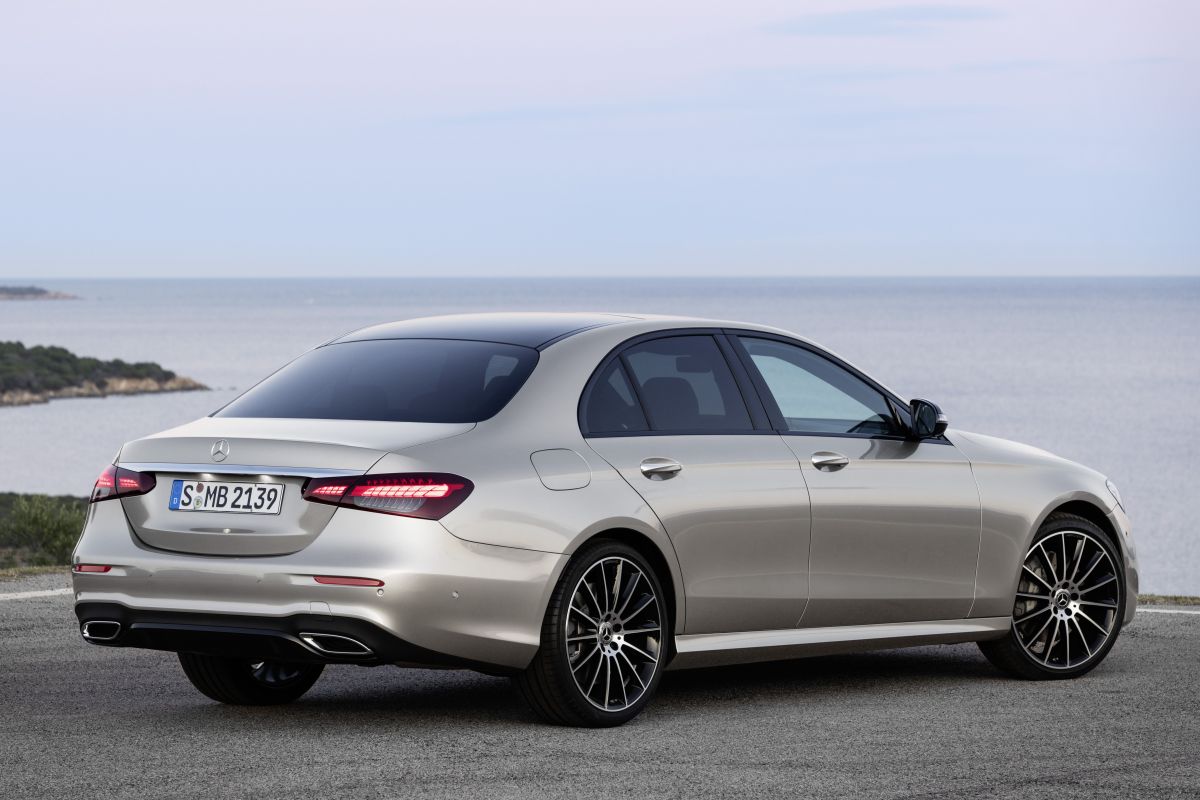 In the interior, the 2020 Mercedes E-Class sports a new six-spoke flattened steering wheel at the bottom that looks like it only has three spokes. Behind it we always find two 10.25-inch digital displays, now available as standard. The digital set of instruments was previously a cost option. The classic instrument binnacle is now history! For those who seek more screen real estate, Mercedes-Benz optionally offers two 12.3-inch displays. Also new is the MBUX infotainment system, lifted from the A-Class (and subsequent compact family members) and the GLE. The system is also being upgraded with this occasion and now recognizes, among other things, whether the driver or co-driver is the one interacting with the system via the ‘Hey Mercedes’ voice command.

The on-board digital instrumentation can be configured starting from four themes: Modern Classic, Sport, Progressive and Discreet. At the same time, the Germans introduce new massage functions: Energizing Seat Kinetics, Energizing Comfort Control with Energizing Coach and Power Nap (only for plug-in hybrid versions). The Power Nap feature includes three programs (Falling Asleep, Sleeping and Waking) and was designed for times when drivers wait for the battery to charge. 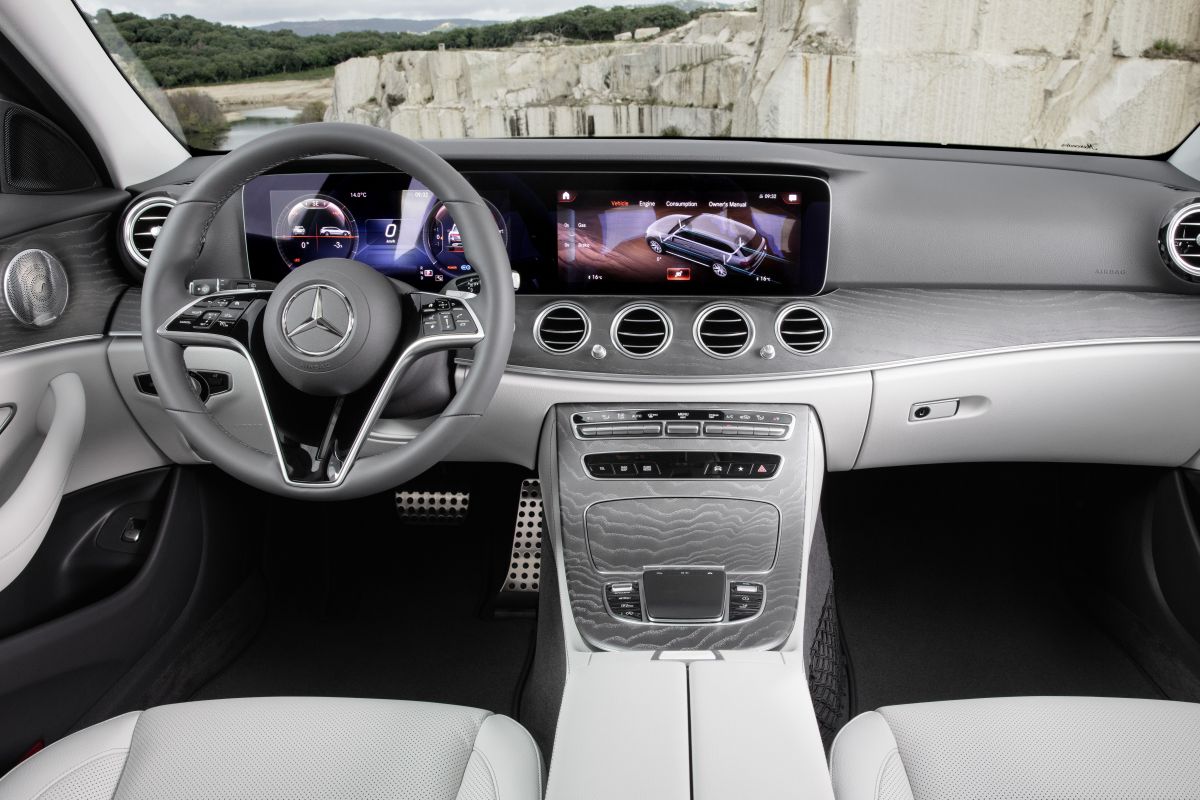 Other novelties are reserved for the engine range. Mercedes’ medium-sized sedan will be available alongside two new gasoline turbo engines, a 2.0-liter four-cylinder and a 3.0-liter six-in-line. These are both equipped with the mild-hybrid EQ Boost system, basically a starter generator that supplies extra power when needed thanks to the 48-volt on-board electrical system. The four-cylinder engine (M 254) delivers 272 hp and, thanks to electrical assistance (EQ Boost), can offer an additional 20 hp temporarily. The six-cylinder engine (M 256) develops 367 hp and also benefits from 20 additional, electrically-generated horsepower. At the moment, Mercedes did not come with full details about all the other engines available, but we do know that the 2020 Mercedes E-Class can be ordered in petrol guise with powers ranging from 156 to 367 hp, while diesel models offer between 160 and 330 hp.

Mercedes-Benz also says that the current E-Class facelift will eventually be available in seven hybrid plug-in versions (sedan, estate, rear-wheel drive or all-wheel drive) that will combine the resources of an electric motor with those of a diesel or gasoline engine. For now, these versions have not yet been detailed. What we do know is that the already presented E 300 de and E 300 e can now also be ordered with four-wheel drive. Until now they were only available in rear wheel drive guise.

According to officials of the German manufacturer, diesel engines will be equipped with a dual system for treating exhaust gases with a urea solution (a process called selective catalytic reduction).

As far as safety is concerned, the 2020 Mercedes E-Class is equipped as standard with Active Brake Assist, a system that automatically brakes the car if it detects stationary vehicles and pedestrians. Thanks to Active Stop-and-Go, the E-Class can stay neatly in the middle of its lane at up to 60 km / h, brake and restart, following the traffic flow. Mercedes-Benz introduces, among other things, an augmented reality mode for the navigation system. The total list of safety systems includes a steering and brake assistant, a blind spot assistant with exit warning and a 360-degree camera. 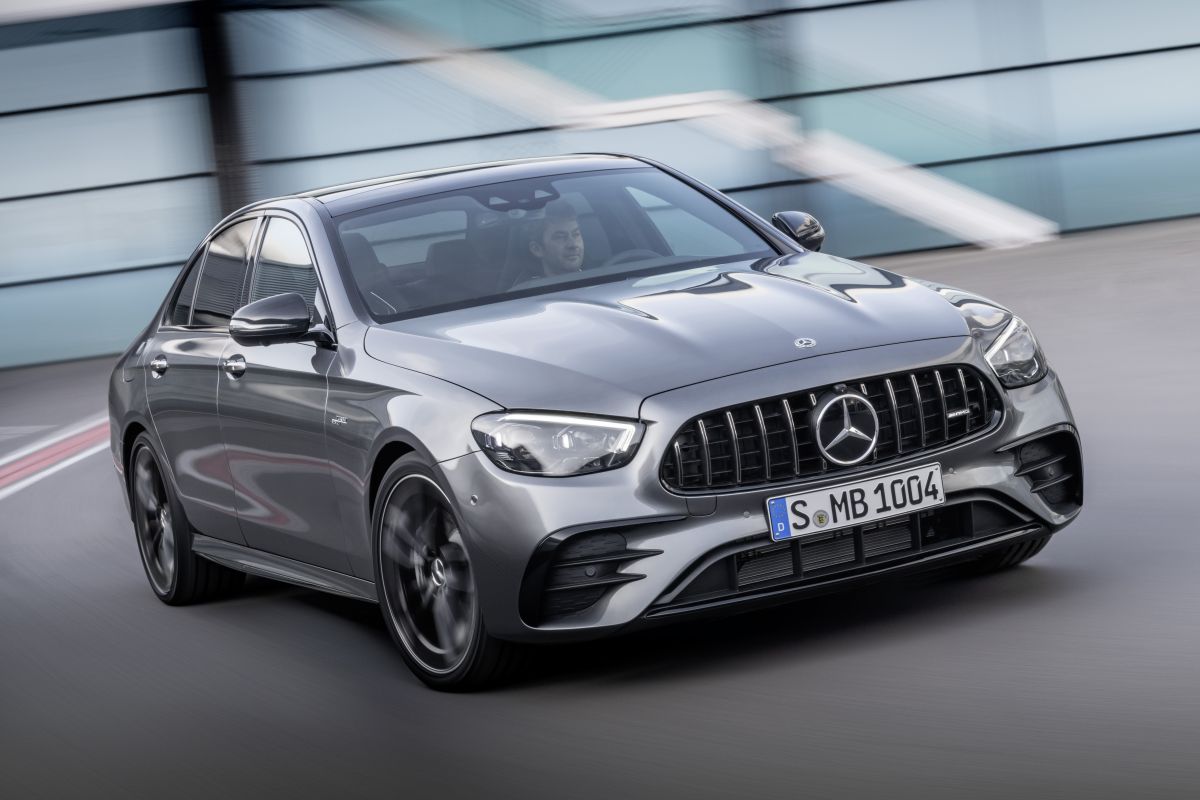 Mercedes-Benz does not forget the fans of the performance versions.Of course, we have to wait a bit longer for the updated hardcore Mercedes-AMG E 63s, but the Germans did, however, present the Mercedes-AMG E 53 4Matic+ as the current top of the range variant.

Under the bonnet of the performance model is a 3.0-liter six-cylinder petrol engine capable of delivering 435 horsepower at 6,100 rpm and 520 Nm between 1,800 and 5,800 rpm. To achieve these values, the Germans say they have relied on both a turbo system and an electric compressor. In addition, the internal combustion engine is supported by the mild-hybrid EQ Boost system which provides an additional (temporary) 22 horsepower and 250 Nm. 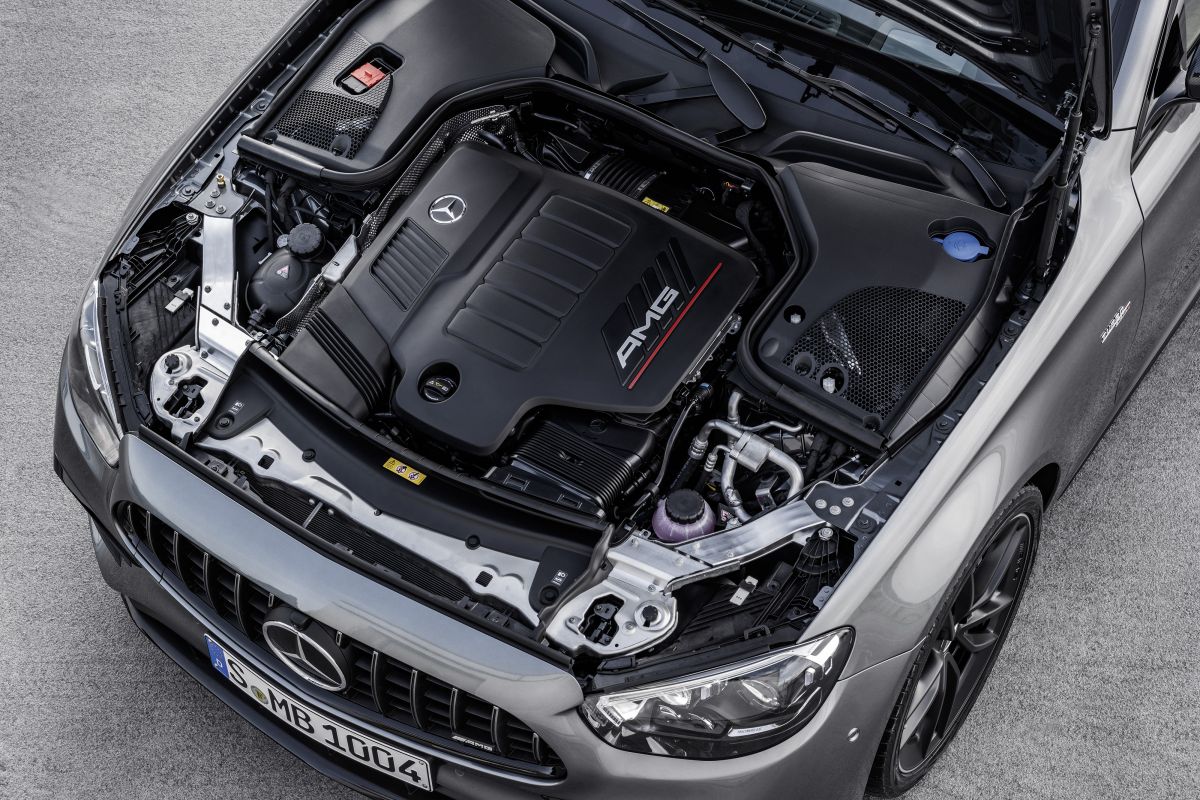 Mercedes-AMG E 53 4Matic + facelift’s resources are managed by the AMG Speedshift TCT nine-speed automatic transmission and the AMG Performance 4Matic + all-wheel drive system. The AMG E 53 facelift sedan accelerates from 0 to 100 km / h in 4.5 seconds, while the estate variant is slower by 0.1 seconds. Regardless of the body version chosen, the top speed is limited to 250 km / h (270 km / h with the AMG Driver package).

The performance version will be equipped with the AMG Ride Control + suspension, AMG Dynamic Select system with five running modes (Slippery, Comfort, Sport, Sport + and Individual) and 370 mm braking discs on the front axle and 360 mm on the rear axle.

On the outside, the Mercedes-AMG E 53 4Matic+ variant of the regular 2020 Mercedes E-Class can be distinguished thanks to its AMG grille, sporty bumper work and the special 19- or 20-inch five-spoke alloy wheels. New is, among other things, the arrival of the AMG Dynamic Plus Package, a package with which the E 53 can also be set for the first time in a Race program with Drift mode. 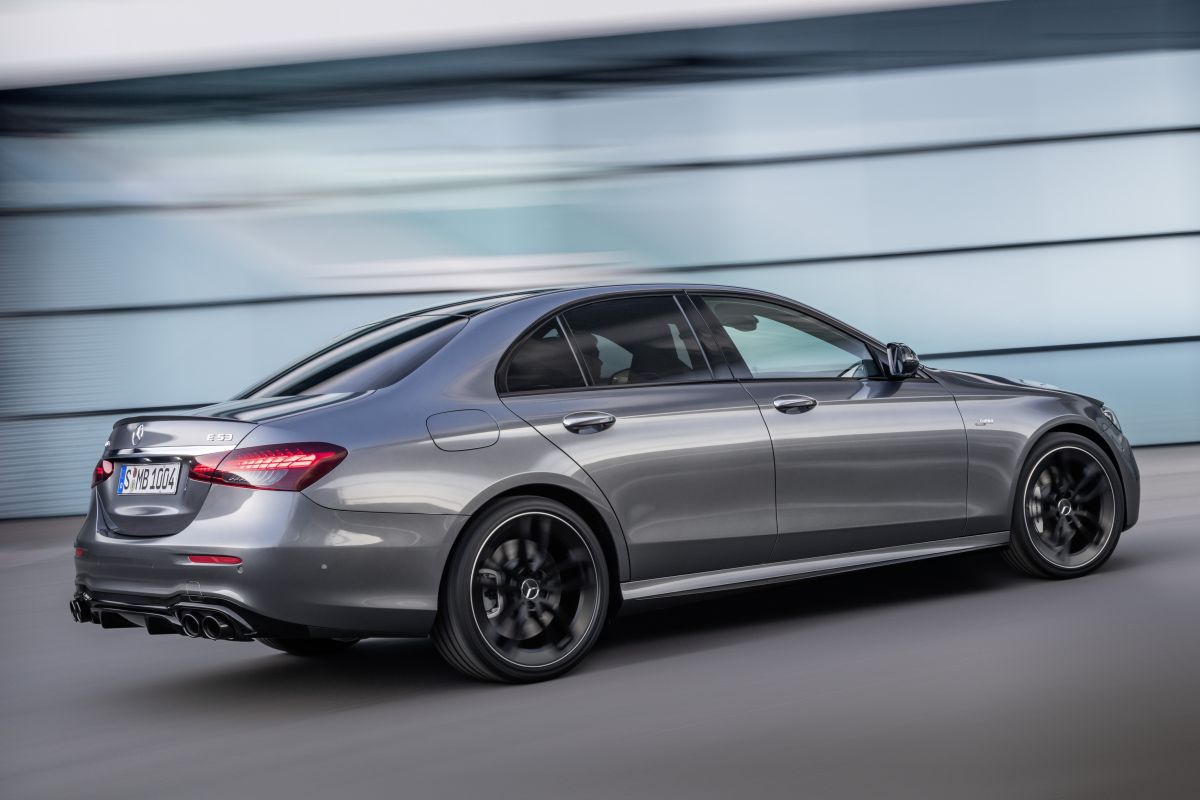