TV commercial pits the Mercedes-Benz C-Class versus a Parkour athlete and a toy monster truck to put their agility, nerve and verve to the test.

No spoilers, we are telling this form the very beginning, so you don’t expect it. So you’d better sit back and enjoy the race run by the sporty Mercedes-Benz C-Class Coupe against a brave parkour artist and a kamikaze toy truck. 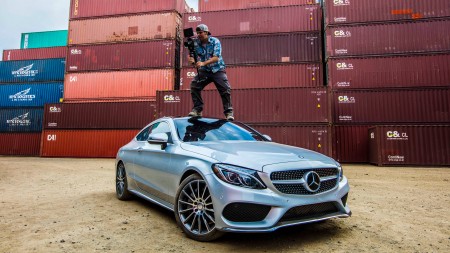 The short video by Teamsupertramp was filmed in an abandoned port area. The three amateur actors were put through their paces as the décor was quite a challenging one: dust (lots of it!), shipping containers and forgotten piles of metal.

If you think that the young Parkour athlete Ronnie Shalvis did all the difficult stunts, think again. It was not an easy job for the Mercedes either. And the Traxxas RC Truck risked its integrity to win, jumping over both man and machine and even ending up upside down.

With a passion for climbing mountains and extreme sports, Ronnie Shalvis is the man who now does stunts for films and commercials for a living.

As for the Mercedes-Benz C-Class Coupe, the car comes with looks to thrill and performance to match its looks. Sporty genes combined with the sleek design only emphasize the power delivered by its 2.0-liter 4-cylinder engine: 241 HP. “It’s such a great car, it’s hard to make it get out of control”, said the director of the movie after a whole day of side-slips. On the set, everybody wanted to drive the fireball

Check out the video that takes you behind the scenes and see how the cameraman got the physical training of his live right on the set: