The supermodel drivers – Hamilton and Rosberg rock the runway

Formula 1 drivers are to be envied, because they get a two-week holiday in high-season. And yet, it wasn’t just holidaying for Lewis Hamilton and Nico Rosberg. The 3-time world champion and the 2-time runner up have become super models for the new Hugo Boss campaign.

Lewis Hamilton and Nico Rosberg in the same room without fighting? That’s an image worth seeing! After crashing into each other three time for the past season, the two Mercedes-AMG PETRONAS drivers have buried the hatchet. Well, it was just for a photo shooting. The two best drivers in Formula 1 of today are advertising for the new collection 2016 “BOSS for Mercedes-Benz”. 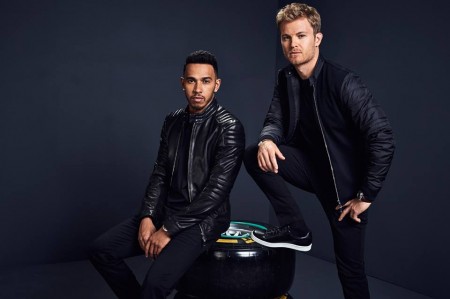 You won’t see much smiling in the video taking you behind the scenes, just two very serious 30-year olds, a couple of leather jackets and some Formula 1 racing tires.

Lewis Hamilton and Nico Rosberg have officially ended their holiday. The Brit spent two weeks in Barbados, while the German moved to his Ibiza home with wife, daughter, cat and dog, not missing his in-holiday training sessions for a day.

The Formula 1 returns next weekend with the Belgian Grand Prix. Hamilton is the ranking leader, with Rosberg following 9 points behind him.