The success story of the Mercedes-Benz SUV started 25 year ago. It was a close-to-production variant of what was set to be the M-Class.

The Mercedes-Benz ML grew into the GLE. The model today sees the light of day at the Tuscaloosa plant in Alabama. The story began with the AAVision in January 1996. Mercedes-Benz unveiled it at the North American International Show (NAIAS) in Detroit. It was the model that started everything.

A year later, in May 1997, the M-Class went into production, marking the debut of the high-ride range. In the fall of 2015, it converted into the GLE, with the E in the end of the indicative showing the relation with the E-Class family.

Since the launch of the M-Class in 1997, more than two million customers ordered an SUV with the star logo. The GLE thus becomes the best-selling SUV in the history of Mercedes-Benz. 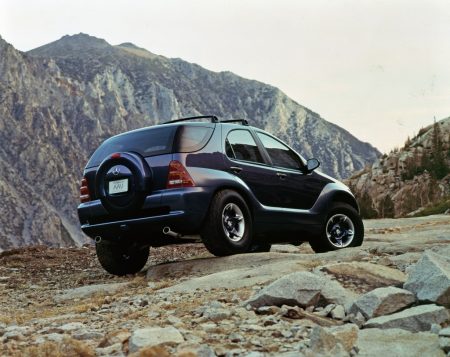 The AAVision (All Activity Vehicle) came within the transformation of the brad. The A-Class and the SLK Roadster were to change the look of the brand forever, addressing to a whole new segment of customers. It was the beginning of a new story at the beginning of the new millennium. Mercedes had prepared a 3.2-liter V6 engine for the SUV and an intelligent all-wheel drive system.

The G in the name of the GLE is a hint that the model joins a family of tradition. It is a family that actually started with the iconic G-Class back in 1979. The M-Class though started at the opposite end of the range. It was designed to be comfortable and classy, sophisticated and luxurious, yet capable when leaving the tarmac behind.

The model featured independent wheel suspension and conventional differential locks. It entered production at the Tuscoolsa plant, a production center established a couple of years before. It was the company’s first such facility outside the Germany. Later on, the ML 55 AMG with 347 horsepower rolled off the assembly line.

To keep up with the high demand, Mercedes worked on the model at the Steyr-Daimler-Puch AG plant in Graz, Austria as well. Today, the ever-expanding Tuscaloosa also builds the GLE Coupe and the GLS, together with the C-Class for the North-American market.