Have you got some time to spare? Say… about 45 minutes? What am I talking about, this is the Germans we’re dealing with here: precisely 45 minutes. I promise you won’t be sorry after watching this magnificent documentary on one of the most daring restoration projects of the Mercedes-Benz Classic.

With the advent of motorways and the constant evolution of motorsport, the engineers began to take aerodynamics more and more serious as a means of reaching higher speeds. Back in 1937, the Mercedes-Benz Special vehicle production department wanted to build a car which was to compete in the 1938 Berlin to Rome race. For obvious reasons the race was first postponed one year and then cancelled altogether, but the car was ready nonetheless.

It was a unique looking car at that time, with a flowing body made out of aluminium covering the whole of the car. It was named Mercedes-Benz 540 Streamliner and it was a thing of beauty. Just imagine the huge satisfaction and excitement everyone involved must have felt when the car was ready – nowadays you would have to literally reinvent the wheel to get equally intensive feelings.

Unfortunately, the car never raced. With the Second World War upon Europe, the time for motorsport contests was over so the 540 Streamliner became a test car for the German branch of tire manufacturer Dunlop, taking full advantage of the high speed abilities of the unique Mercedes-Benz car.

After the war the car entered some sort of conservation state.

The conservation part didn’t go very well, though, as the car was found in a warehouse in 2001 in the form of… a rusted chassis. At first, nobody quite knew what car it came from but it was intriguing enough for the people at the Mercedes-Benz Archive to dig deep and find out. Traces of aluminium found bolted to the chassis meant that it was clearly a special project, something confirmed by the inevitable find: the chassis belonged to the 1937 special project. 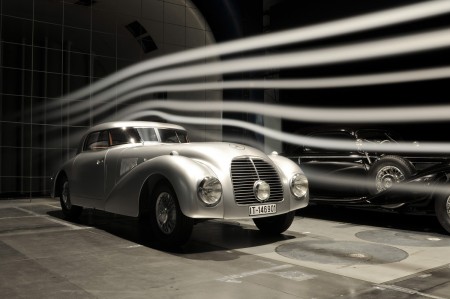 The restoration project began in 2011 and was conducted by Mercedes-Benz Classic. Technical skills, methods and materials of the period from which the vehicle originates were used, as well as original blueprints found while searching the archive. The end result is a car with a drag coefficient of Cd = 0.36, an excellent value even by today’s standards (by contrast, the contemporary 540 K Coupe had a coefficient of Cd = 0.57).

It’s an emotional video. This car isn’t just a pile of metal (well, a lot of people will tell you that no car is), but the product of quite a few men’s work span over more than half a century and culminating with a test run meant to check if the initial 185 km/h speed limit is plausible or even possible. No spoilers here, go watch the video. And don’t forget that if you happen to be in Essen between 15 and 19th of April, you can actually go see the car at the Techno Classica exhibition – read more about it here.