The story of the Mercedes engineered by Porsche

The Mercedes-Benz W124. The 500E that later became the E500. It is one of the company’s most appreciated model of all times. It was the car that Porsche engineered.

Porsche had a purpose with the Mercedes-Benz W124. They engineered the model so that it could leave the BMW M5 far behind on the autobahn, with the driver wondering: “What was that?” The sedan actually turned out to be more than just a sports saloon with a displacement that could as well be of a truck. In terms of refinement though, it had nothing to do with one. It was every inch luxury and style. It screamed power and performance. It was the company’s pride and joy.

To beat competitors at that time the W124 received a special engine. It was the 5.0-liter V8 code named M119, minus some turbos, that won the 24 Hour Le Man race. It then powered a Sauber C9. It accelerated from a standstill to 100 km/h in just 5.5 seconds. But the performance came with quite a cost. The super-sedan ended up being 35% more expensive than the BMW M5. $88,000. 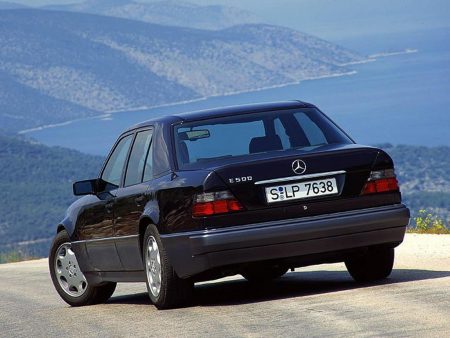 When Mercedes called Porsche to ask or help

But the car needed reengineering. The Mercedes experts were already caught up in trying to find the silver bullet against the Japanese rivals. A call to Porsche and the Mercedes-Benz W124 got the width of the rails that it deserved, while Porsche cashed in. A totally win-win situation.

The super-sedan had 322 horsepower and needed new a new suspension and a new set of brakes, with the SL being the donor. But in order to accommodate the change, the car required fender flairs. With the prominent components on, the model turned out to be much too wide to fit in the Mercedes production line. So Porsche solved this issue as well. They ended up assembling the Mercedes. But it wasn’t exactly milk and honey. Production took ages. Whole 18 days. First the body was modified by Porsche. Then the model went back to Mercedes with the paint shop as destination. And then it returned to Porsche for final assembly. Mercedes received it for a final inspection before delivering it.

When Mercedes revealed the W124, it was a revolution. It had a drag coefficient of just 0.26. It featured an innovative wiper system. The solidity of the structure was unbeatable at that time and so was safety onboard.