Position for takeoff. And off it goes! This is the smart fortwo that has been given wings to fly into the future of urban mobility.

Fashion designer Jeremy Scott got his hands on the smart fortwo electric drive and turned into an electrifying vehicle. “Both Jeremy Scott and the smart brand are pioneering trendsetters, venturing into uncharted territories and challenging the status quo”, says Dr. Annette Winkler, Head of smart. She admits she was totally enthusiastic when she saw the first sketches of the flying smart. 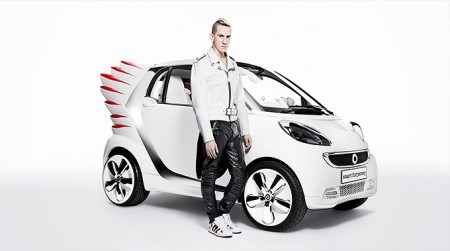 As symbols of freedom, the two wings glued to the roof are a trademark of Jeremy’s creations. And it’s not just about the looks. The smart fortwo virtually blows minds! When the driver pushes the brake pedal, the wings light up together with the rear lights. You’ve never expected this, haven’t you? Well, that’s the smart… so unpredictable.

“For me, wings mean freedom, a sense of weightlessness. Because of this, I definitely wanted to have them for the smart electric drive in order to convey the way it frees the environment of noxious emissions and symbolizes the new lightness in mobility”, says the innovator Jeremy Scott. 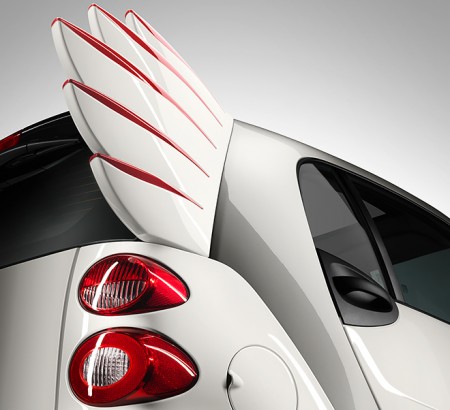 The partnership between smart and the fashion designer was one of the kind and surely out of this world. Smart was the first car brand ever to permit a fashion designer to make changes to the vehicle’s body.

Ok, easier said than done. It took Jeremy Scott eight full months to develop what he called the “smart forjeremy”. He worked day in, day out at the Mercedes-Benz Cars Advanced Design Studios in Carlsbad, California. His visionary ideas helped the winged smart recently see the light of day. 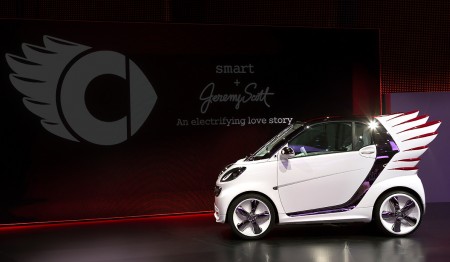 The smart forjeremy is painted in red and white, letting the silver chrome-plated trademark lifesaving tridion cell shine bright and stand out just like the… flying device. Both wings at the rear are made of transparent fiberglass, as the designer requested.

Curious to check out the interior of the flying smart? We tell you this much: it amazingly matches the exterior concept. Click here for more!