The sky is the limit for the Blitzen Benz!

It breathes fire and exhales power. Are you sitting down while reading this? Please do! The Blitzen Benz features a 21.5-liter (yeah, three figures there!) engine. It was by far the fastest car in the world when it showed up in Daytona in 1911. Right now, its owner, William Evans, is taking it for a ride.

It may look like a railway engine. But for ten years, no train, boat, automobile or plane had ever gone anywhere near its record breaking speed. It wasn’t until 1929 that a plane surpassed it. 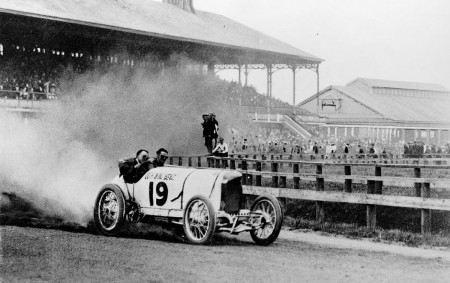 In 1910, following the principle „Bigger is better”, the Blitzen Benz showed up in Daytona, with Barney Oldfield behind the wheel. It exceeded 210 km/h (130 mph). One year later, same car, but a different driver, Bob Burman, came in to shatter that record by 16 km/h (10 mph). The speedy car no longer exists, but there is a gentleman in the United States who owns one just like that: William Evans has one in his own garage.

„I am the luckiest guy I’ve ever met – he says proudly – because I get to play with this whenever I want it and it’s the best damn looking car that ever was. There is not a single bad angle to this car. There’s nothing wrong with it.”

After a long restoring process, his childhood dream came true. „Some projects want to get done, others fight you every inch of the way. This one wanted to get done. We really had no problems with it. Everything fell into place and when the engine was finished, it started at the very first try”, he remembers.

Evans used to fancy the car when he was a kid in highschool: „It’s really been a long love affair. I had a photograph of it on my wall.” One taken by his mother in the Mercedes-Benz Museum in Stuttgart. From his wall, it went into his garage 25 years later.

And although he can see it every single day of his life, Evans is still mesmerize by it: „Everybody knows what the Blitzen Benz is, but nobody has ever seen it. It is mythical, it’s like a unicorn.”

And how fast does it go nowadays? „Actually your eyeballs shake inside your sockets, so it’s very difficult to see what’s going on” is his answer.

William Evans talks about getting loads of support on the side of Mercedes-Benz. „They are the only corporate company I know that really embraces the importance of their past. Having an idea is something. But taking it all the way to the product that touches the customer’s hand is something different.”
Evans says he is just a temporary owner and that nobody is going to remember who he was. But the car lives its future through its past.