Lewis Hamilton made a silly mistake in Baku. One that sent him from P1 straight to P15 in Baku, at the Azerbaijan Grand Prix. “I’m sorry, guys”, he said.

Everything seemed to be going well for Lewis Hamilton. The race was red-flagged following Max Verstappen’s crash in Lap 50. At the restart, Hamilton flew by the leader of the race, Sergio Perez, but his brakes failed him and he drove straight and off the race track.

His efforts for comeback were useless at the street circuit in Baku. He therefore had to settle for the 15th position. His teammate did not do much better either. Valtteri Bottas finished 12th in Azerbaijan.

Mercedes-AMG Petronas did not lose much though. Red Bull’s Sergio Perez scored vital points for his team with his second win in Formula 1. But his teammate and leader of the overall ranking, Max Verstappen, crashed out following a tire explosion.

“Is he ok?”, Lewis insisted on finding out after seeing his rival’s car crashed into the wall. Max was ok, but no one can say the same about his ego He was in the lead, with a big chance to win a race that might have been decisive for the World Championship title in the end of the season. The Dutch is still the leader of the overall ranking, 4 points ahead of Hamilton.

What was the childish mistake that sent Lewis Hamilton off the track?

Lewis Hamilton’s failure led to a conversation that revealed a childish mistake.

“Yeah, looks like it was knocked back on”, his race engineer Peter Bonnington replied.

“Could’ve sworn I switched it off”, the Brit told. 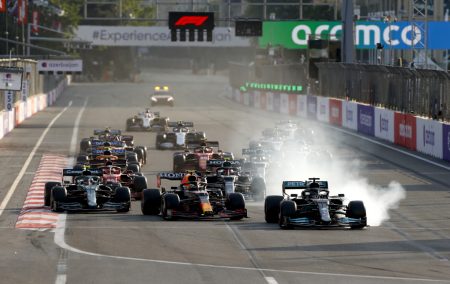 The “magic” button is actually a button on the steering wheel. It engages a setting that Mercedes uses when the Safety Car comes out. It is designed to help het the brakes by altering, among other things, the brake bias settings.