The Royal Drive – A racer for the Prince Albert of Monaco

Monaco
Elena Luchian, May 30, 2016
3.7K 0
Home Classic Classic cars The Royal Drive – A racer for the Prince Albert of Monaco

It was actually a win-win situation. Prince Albert of Monaco managed to get to his destination on time and Formula 1 driver Nico Robserg got a few kilometers through the always congested traffic of Monaco Monaco without waiting in a line, because the Police escorted his precious cargo.

And of course, there is no way using just any car for his Royal Highness. It was the exclusive Mercedes-Benz 300 SL Gullwing, a 61-year old automobile with not seatbelts, because there was not such a safety feature back then. And the car has got a single side mirror, on the driver’s side that is.

“Do you trust my driving skills, can I drive?” is Nico’s first question. The German has done his homework: he read a whole book about how to drive the classic. 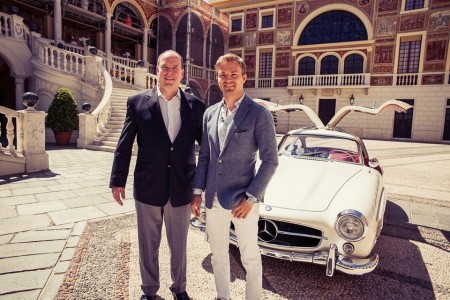 The driver and the Prince share their experience with kids. Albert of Monaco has twins and Nico’s daughter will be one year old next summer. The Prince already has a farm in Monaco, for the moment, Nico is just dreaming of it. Since they both speak English, French and German fluently, they alternate languages through the dialogue.

Once the royal drive is over, Nico will switch to his race car.

The Prince chose well: Nico Rosberg is a 3-time winner of the Monaco Grand Prix, even though this time, it turned out really bad for him. He finished sixth after a stormy race. Once the race was over, Nico switched to his smart electric that he drives around Monaco on a daily basis.