The production of the new Mercedes-Benz A-Class debuted in the Rastatt plant in Germany. The A-Class is the first of the eight models of the new compact car generation that rolls off the assembly line of the German manufacturing center.

The new Mercedes-Benz A-Class sees the light of day some 90 kilometers west of Stuttgart, triggering the production of the new generation of compact cars in five plants on three continents. It was Markus Schäfer, Member of the Divisional Board of Mercedes-Benz Cars, Production & Supply Chain, who drove the first vehicle off the assembly line in Rastatt. His destination was the Kecskemét plant in Hungary, where the hatchback will also be built.

“Mercedes-Benz Cars starts an unprecedented ramp-up cascade with the A-Class. In our global production network, we can ramp-up the production of our vehicles in proven top quality and supply the global market even faster”, says Markus Schäfer.

The A-Class is the first model of the fourth generation of the company’s compact cars, replacing the predecessor that was being in series production since 2012. The compact family proudly presents five members: the A-, the B-, the CLA, the CLA Shooting Brake and the GLA. Three more members will be added to the family. 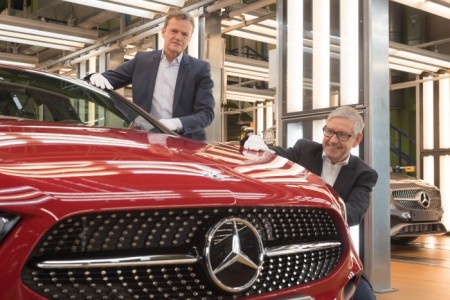 The production of the A-Class in Rastatt sets a new milestone for the German plant. More than 4.7 million cars have been produced there since 1992. The first A was manufactured there in 1997. Since the 90s, extensive construction work was part of the preparations for the new compact car generation. Two body-in-white shops have been expanded to over 50,000 m2. The construction of additional production areas was necessary to continue the preceding generation of the A-Class as well as the B-Class and the GLA without interruption until the start of the new vehicle generation. The new space will also be needed in the future for the production of the new models at the site.

In the future, the facility will also receive the production mission of the compact electric vehicles of the product and technology brand EQ.

Introduced in Amsterdam on February 2nd and displayed in Geneva in March, the new Mercedes-Benz A-Class will have its market launch in May. The car sports a completely new infotainment system, the MBUX – Mercedes-Benz User Experience, opening a new chapter in the Mercedes connectivity field.

Looking sportier than ever, the A is now more practical and comfortable than ever. More shoulder, elbow and headroom, easier access to the rear and a larger boot are the benefits provided by the new compact car with the star. It also receives the latest driving assistance technology adopted from the S-Class sedan, taking it to a whole new level in terms of active safety.

Following the debut of production in Rastatt, the A will also roll off the assembly lines in Kecskemét and Uusikaupunki.