The Mercedes-AMG GT 4-Door Coupe came to shatter the world of Porsche Panamera. Now the top variants get to meet on the racetrack.

It has been a short rivalry, since the Mercedes-AMG GT 4-Door made its debut at the Geneva Motor Show in the early spring of 2018. But since that moment on, it has been quite a war from afar.

In December 2019, the car with the star broke the record held by the Porsche Panamera Turbo S at the Nurburgring Nordschleife by no less than six seconds.

Now they meet up on a different track. How will things turn out this time? 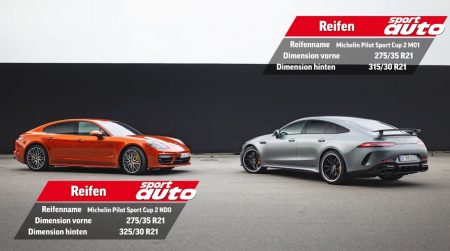 Enter SportAuto and pro driver Uwe Sener brought the two of them at the Hockenheim GP circuit and put them through their paces. The Mercedes-AMG GT 63 S 4-Door Coupe wears 275/35R21 wheels on the front axle and 315/30R21 at the rear, shod with Michelin Pilot Sport Cup 2 M01 tires.

Almost identical on paper, but how are they actually on the racetrack?

Both of them sport impressive and very similar figures. The Merc received the AMG 4.0-liter biturbo V8 with 639 horsepower and 900 Nm of torque. The unit delivers its resources to all four wheels via a nine-speed automatic transmission and the all-wheel drive 4MATIC+ system. All these parameters make the car hit 100 km/h (62 mph) from a standstill in 3.2 seconds on its way to a top speed of 315 km/h (196 mph).

The Panamera Turbo S is also powered by a 4.0-liter V8 engine. The engine churns out 630 horsepower and a peak torque of 820 Nm, paired to an eight-speed automatic gearbox and an all-wheel drive system. The car on the racetrack got the Sport Chrono Package, so it can make its way from a standstill to 100 km/h in just 3.1 seconds.

The Mercedes-AMG GT 63 S 4-Door Coupe runs the fast lap around the Hockenheim GP in 1 minute and 52.3 seconds. Can the Porsche Panamera Turbo S beat this?