The Phantom of the Mercedes at the San Francisco’s Opera

Elena Luchian, May 25, 2016
1.45K 0
Home Lifestyle The Phantom of the Mercedes at the San Francisco’s Opera

The show ain’t over until the Mercedes-Benz sings. The San Francisco’s Opera Summer Season 2016 opens on May 27th with Bizet’s Carmen. The staging is a never before seen display of dare and passion, with even six Mercedes-Benz models of the 1980 showing up in front of the spectators.

“Carmen” marks the long-awaited debut of the innovative Spanish director Calixto Bieito, the so-called “bad-boy of the opera” in the United States. He is the artist to defy classic expectations, bringing the ultimate performance of the impassioned gypsy Carmen to the public’s attention. 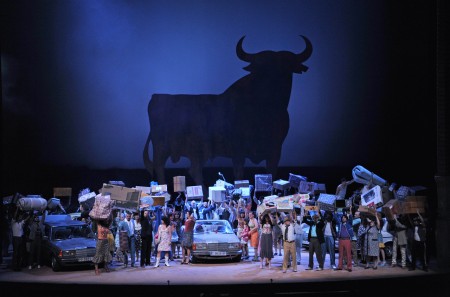 Bieito commented on the opera he is staging at the San Francisco’s Opera: “It deals with limits, the emotional and physical boundaries between people and about freedom, love, violence, sorrow, desperation, solitude. My Carmen is not picturesque, nor folkloric, nor a collection of engravings of a stereotypical old Spain. It is a Carmen that walks across the border.”

The production elements include six Mercedes-Benz W123 model cars from the 1980s. These Mercedes-Benz sedans, taking center stage in Carmen, were widely called the “Grand Taxis” and were a popular form of transportation in the region. The cars appear in the production’s modern-day frontier universe as the method by which the gypsies smuggle their contraband.

For all those interested to see the boundaries-breaking staging in San Francisco, tickets for Carmen are priced from $26 to $395. Standing Room tickets go on sale at 10 a.m. on the day of each performance; tickets are $10 each, cash only.