Legendary Hollywood comedian Eddie Murphy is a bit past his teenage, but he keeps girls coming his way. Does his car have anything to do with it?

The former “Beverly Hills Cop” is surely getting all the attention of the cops in Beverly Hills, when he cruises past them in his Mercedes AMG SLS. The 54-year old actor has purchased the gullwing vehicle in 2011 and it has been his number one ever since. Well, number two actually, but it makes sense when you’ve got a big family. 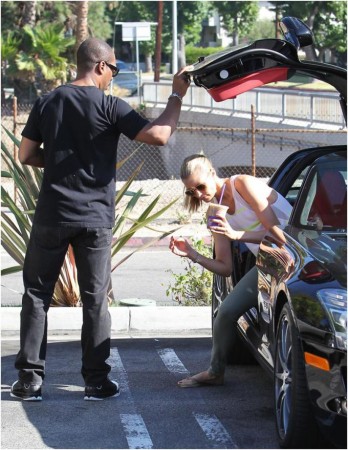 Father of seven kids, Eddie Murphy usually prefers the American SUVs. The two-seater is just a capricious ride he takes around Beverly Hills.

The gullwinged SLS looks a bit uncomfortable to get on and off it for his sky-high legged girlfriend, Paige Butcher, even though, like a true gentleman, he holds the door open for her. Anyway, he got the car before getting the girlfriend. Eddie and Paige started dating in 2012.

The Nutty Professor has chosen a super hot color combo for his 2-door 2-seater: the $200 000 black SLS came with red leather seats.

Eddie Murphy’s Mercedes SLS is a rear-wheel drive with a front mid-engine. The power train of this luxury vehicle consists of a 6.2 L V8, DOHC engine. The top power of the fireball is 563 HP and 479 lb-ft (650 Nm) of torque.

Eddie’s German car is not just a luxury vehicle, but also one with special safety precautions. In case of an accident, the SLS consists of explosive bolts that will fire and separate the doors from the car. There is also an anti-locking system. Hopefully, the “Beverly Hills Cop” will never test the system. 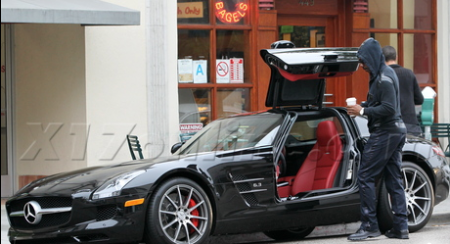 He is not even into speed, he says so himself. Well, hard to believe it when you’re keeping in your garage some of the most expensive vehicles in the world: