Mercedes-Benz GLA
Elena Luchian, May 27, 2015
2K 0
Home Mercedes Benz GLA-Class The novice driver and the sea captain sailing through the city in a GLA

All aboard! A 78-year old sea captain and a novice driver start sailing through the city of Hamburg in a Mercedes-Benz GLA. One car, two perspectives. Let’s see how this unconventional team see the GLA.

Julie De Groditz is preparing for high-school graduation and she just got her driver’s license four months ago. Her partner in driving, Jurgen Schwandt, a ship captain that has spent decades sailing, is now driving his fifth Mercedes. Both of them are to test the GLA in Hamburg. 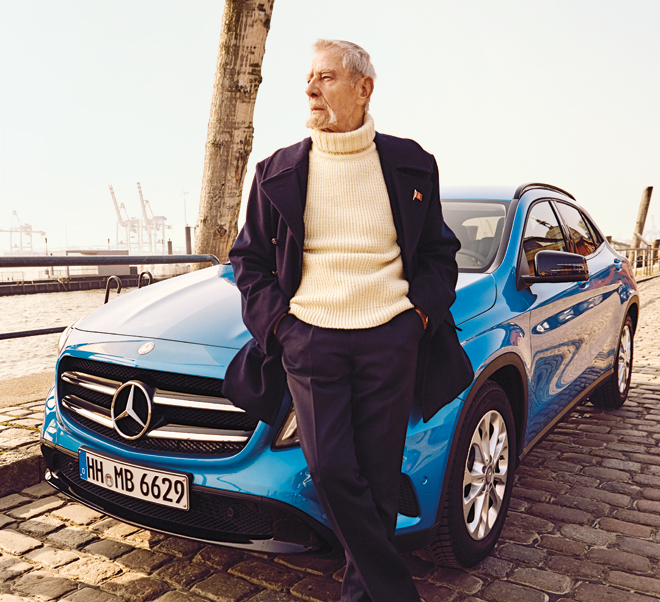 Captain at sea, captain on the road. Herr Schwandt feels at home in the Mercedes. He knows exactly where is what. Compared to the giant ships he has been maneuvering across oceans all his life, handling the GLA along narrow streets is child’s play for him. He asks the help of his crew, the navigation display to show him the route and the ECO start/stop function during the gridlocked Hamburg traffic.

“A tanker can take up to 15 kilometers (9 miles) to come to a complete standstill. So if you don’t think far enough ahead, you may well spend several agonizing minutes waiting helplessly for the inevitable collision”, the captain tells the story of sea adventures. 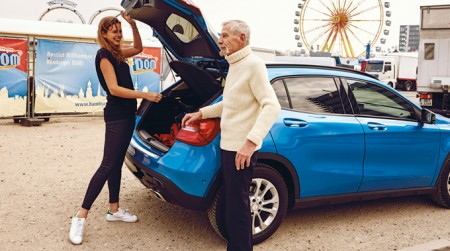 But with the GLA, no collision is on the menu, as he knows exactly how to handle it. He has handled bigger vehicles – that is on land, too – before.

“Years before I needed a driver’s license, I signed up as a 16-year-old to crew on a sailboat. When I finally settled down and got my own place 25 years later, I bought a G-Class. Since then, I’ve only ever driven Mercedes – you can’t beat them for solidity and quality”, the captain says.

There is just one thing the captain dislikes about the GLA: “The color of our GLA – South Seas Blue – is not really my cup of tea. But that’s only because I prefer the Caribbean.” 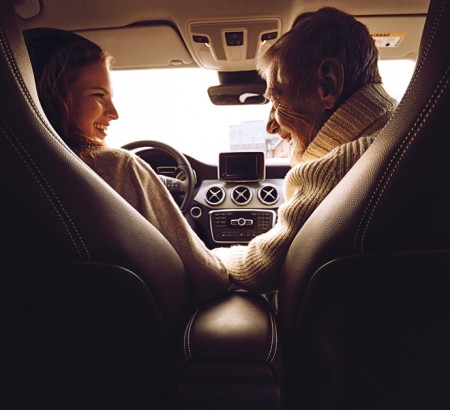 Julie appreciates the humour of the senior gentleman. Like any lady, she first notices the design. So let’s go for the interior first:

“The seats are quite sporty looking and give you the feeling of being in a race car. The instrument cluster with all the switches and the silver-colored air vents is pretty futuristic – like the control center onboard a spaceship”, says Julie.

But this spaceship comes with a manual transmission and she has only handled her mother’s automatic car: “When I first tried the GLA, it took a while to get used to the manual gearshift. The first few meters were pure slapstick.” But she’s off the hook. There is no video of her first attempt ever to drive a manual. 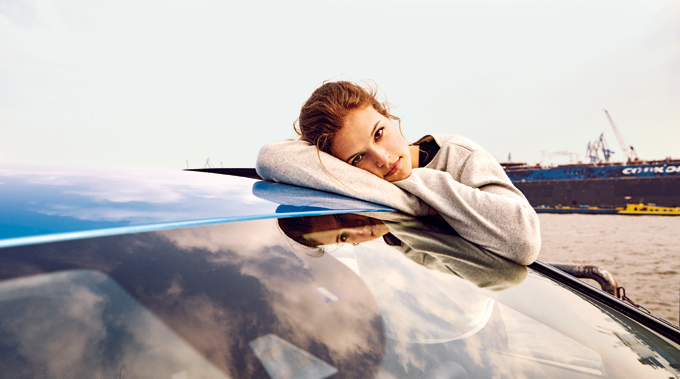 “I often have problems judging the width of a car when I’m at the wheel, but the GLA gives the driver great visibility, and I felt confident even whizzing down narrow streets. All the same, I was really glad to have the Active Parking Assist function – if I owned such a smart car, I wouldn’t want to rely on my visual judgment in every situation. The GLA is like a personal bodyguard.”

So we leave her to her bodyguard, to the senior gentleman and to the congested Hamburg. May they have fair wind while sailing through the city! So long, GLA!