The next 2021 Mercedes-Benz SL will be developed by AMG

The Stuttgart manufacturer has delegated AMG’s performance division to develop the next generation of its top roadster. The future Mercedes-Benz SL will be built on a dedicated platform and will return to the soft-top roof. The first rendering realized by the italian car magazine Quattroruote.

Change of strategy at Mercedes-Benz. Powerful and sporty models will be developed by the AMG performance division and not by Mercedes-Benz. At first glance, it seems like a mismatch because the SL is more of a luxury roadster and at the same time a GT due to the hard-top roof and not a pure sports car.

But the next generation Mercedes-Benz SL will be one of the sportiest models of the range. This means that after six generations of luxury roadster, the new SL will change its positioning and image. And that’s not all: in the perspective of the genetic modification of the future roadster, it is very possible that Mercedes-Benz will rationalize the high-end offer for convertible models.

And some of these models will also move under the AMG umbrella to become even more efficient and exclusive. As for SL, the next generation will address to younger clients who wants more sporty models.

The new SL could be launched in 2021 on a completely new platform called MSA developed by AMG (Modular Sports Architecture) to be adopted also by the future AMG GT.
Thus, AMG GT and SL will share the same drive train, electrical architecture and some engines. This synergy will alow cost reduction, fundamental in this period when all manufacturers need huge resources for electrification and autonomous driving.

The SL will receive a technical upgrade with the aim of returning to the philosophy of the iconic 300 SL Coupe from 1954. Thus, the future SL will be lighter and more agile, but without penalizing the proverbial comfort of the previous generations or the luxury level.

The current Mercedes-Benz SL is offered in two versions: the SL 400 with 3-liter V6 and 367 hp and SL 500 with 4.7-liter V8 and 455 hp. For the propulsion of the next generation, Mercedes-AMG already has available the new engines with six cylinders in line of 3 liters of the models 53 AMG and V8 bi-turbo of 4 liters of the versions 63 AMG that develop between 435 and 612 HP, both with technology on 48V and mild-hybrid system with a small 22 HP electric motor.

The 9-speed AMG automatic gearbox will be available for both versions. Due to the emissions but also to the sports profile of the new SL, the big and heavy V12 engine will no longer be offered.

And the design is completely new


The new roadster will not only have a dedicated platform but also a completely changed design as the new architecture gives designers greater freedom. You can see here the rendering from italian car magazine Quattroruote.
In this respect, sportier and more striking lines and sportier proportions with wider track, longer bonnet, cockpit pushed rearward and shorter consoles are expected. 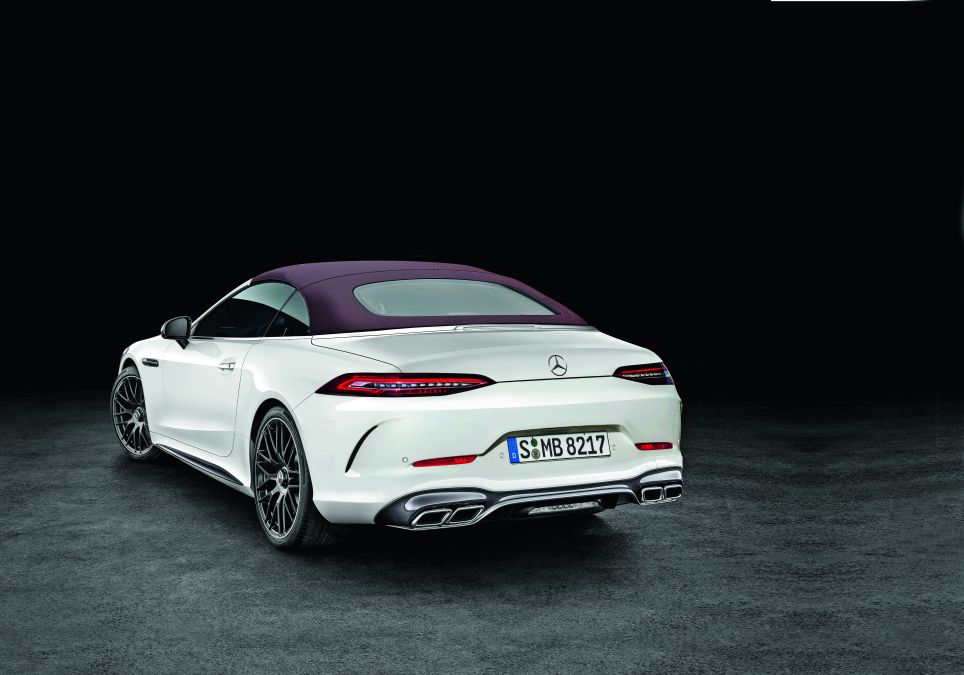 Also, we expect a slightly retro design due to the reintroduction of the textile roof that will replace the hard-top from the last two generations. With this solution, the rear part will have a slim design because the soft-top is less bulky than the complicated hydraulic system from the hard-top.

Adopting the soft-top roof will change the design of the rear part that will have a lower line, and the rear console will be shorter. It is not known whether the future SL will adopt the integral steering from AMG GT C, but 4Matic all-wheel drive is likely to be offered.

As for the interior configuration, there are rumors that talk about switching to 2 + 2-seater architecture for two reasons: to compete with the Porsche 911 Cabrio and to leave the 2-seater configuration to the AMG GT.

The cabrio range could be reduced

Today, Mercedes-Benz has three top convertible models available: the S-Class Cabrio, SL roadster and AMG GT roadster. With the arrival in 2021 of the new SL developed by AMG, the S-Class Cabrio could disappear from the range. And the fate of the AMG GT roadster is uncertain after the sporty repositioning of SL. The coupe remains, but the roadster may be gone. Similarly, it seems that the S-Class Coupe will remain and only the cabriolet will disappear. But nothing was decided yet.