With a wheelbase extended by 180 millimeters, compared to the long-wheelbase S-Class version, with a two-tone paint scheme, Executive Seats and Chauffeur package as standard, the new Mercedes-Maybach S-Class will be available before the end of this year.

Launched in 2015, the former generation Mercedes-Maybach has found 60,000 customers worldwide. For the past years, every seventh S-Class sold was a Maybach. Every month, 600 units steered to China and the average increased to 700 last year.

According to a market survey, Mercedes found that, in 2019, there were 52 million people in the world who would afford to invest more than $ 250,000 a year. According to the financial prognosis, their number will increase to 95 million in 2030. Therefore Mercedes estimates that the demand for Maybach models will increase.

A whole chapter of the press kit explains the two-tone paint that is available as an option. The car initially gets the color of the lower part. Following this procedure, the car goes to the custom paint shop. Once there, the entire bodyshell is ground to a matt finish by hand. All the surfaces that will later bear the lower color are masked off. The exposed parts of the body are then completely painted by hand. There are 10 color combinations available for the lower. The upper part of the body and the whole painting process takes up to a week. 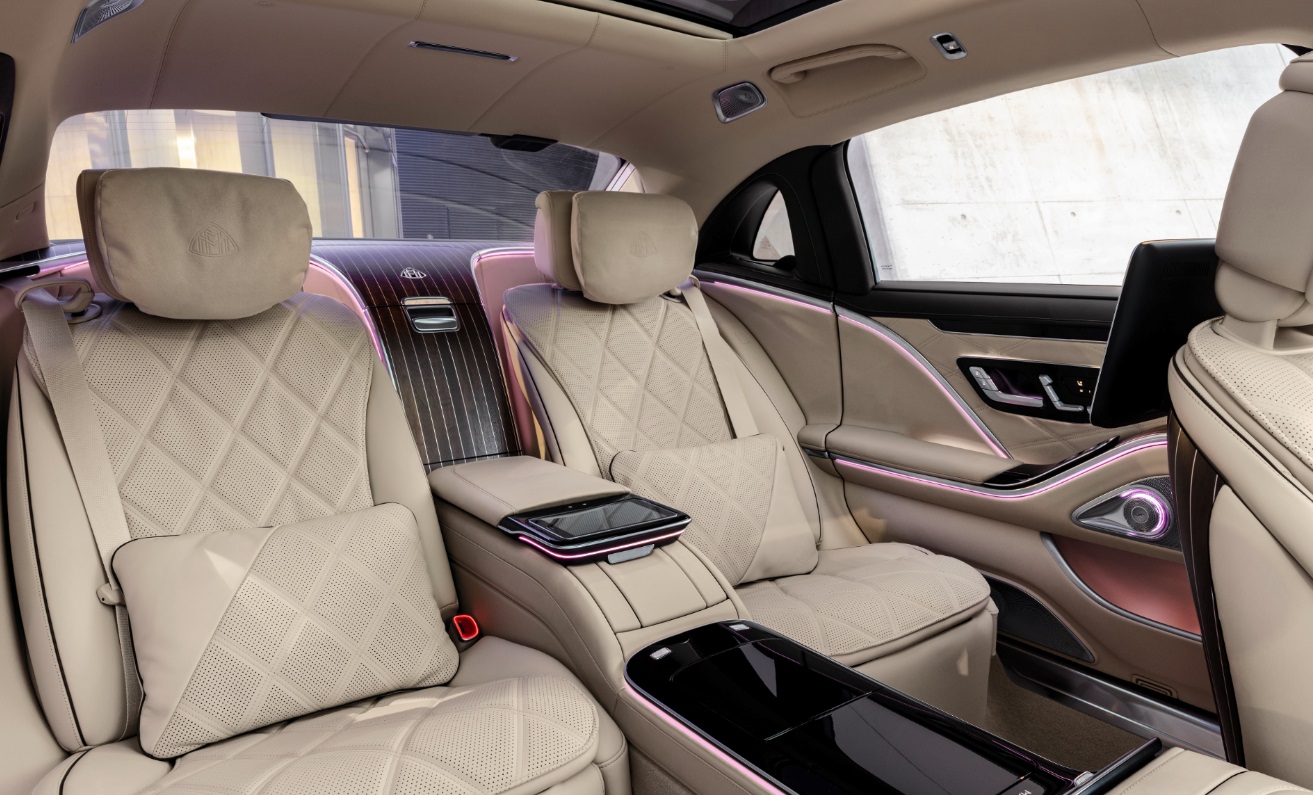 Because Mercedes-Maybach is primarily designed for the wealthy passengers who take their seats in the rear, they are the ones getting the special attention.

The new Mercedes-Maybach S-Class, more room for luxury and comfort

Thus, Executive Seats in the rear and Chauffeur package are standard. Furthermore, the kneeroom between 318 and 326 mm is larger than in the S-Class with long wheelbase (197-218 mm). The rear doors are wider for better access and can be optionally equipped with electric operation. Thus the rear occupants can close and open them with minimum effort.

Other innovations are the automatic seat belt extender, an idea carried over from the front seats of the coupe and convertible. Calf massage is available as part of the Seating Comfort Rear package. Rear passengers also benefit from adaptive rear lighting. They can thus adjust the brightness, size and position of the light spot. The optional refrigerated compartment in the rear armrest puts cooled drinks and food within easy each of passengers in the rear. The temperature is set using the illuminated control panel. The refrigerated compartment has a capacity of ten liters and is removable.

The Airmatic ADS + adaptive suspension is standard. Compared to the S-Class, the Dynamic Select has an additional mode called Maybach. This particular mode offers a more comfortable power delivery with gentler accelerator characteristics for the Chauffeur mode. Low-shift transmission configuration and starting off in 2nd gear are also part of the menu.

As with the S-Class, the E-Active Body Control suspension with Road Surface Scan and Curve functions is optional.

Customers can also tick the box for the rear axle steering with two steering angles: 4.5 and 10 degrees. It reduces the turning circle from 13.4 meters to 12.4 and 11.4 meters, respectively.

The S-Class is the quietest luxury limousine in the world, but Mercedes took things even further. The premium car maker intended to provide an even quieter ambiance in the Maybach. For this especially, they installed the Active Road Noise compensation. The feature reduces unwanted low-frequency noises using counter-phased sound waves. The bass speakers of the Burmester high-end 4D surround sound system are used for sound reproduction.

The new Mercedes-Maybach S-Class comes standard with the second-generation MBUX multimedia system and the 12.8-inch OLED display. Customers can pay extra for the MBUX Interior Assist in the rear. It recognizes numerous occupant intentions. It identifies eye-direction, hand gestures and the body language of the occupants, in order to assist them with automatic vehicle functions as the situation requires. The Mercedes‑Maybach S-Class is also able to recognize movements and gestures of the rear occupants with the help of 3D laser cameras in the roof liner. 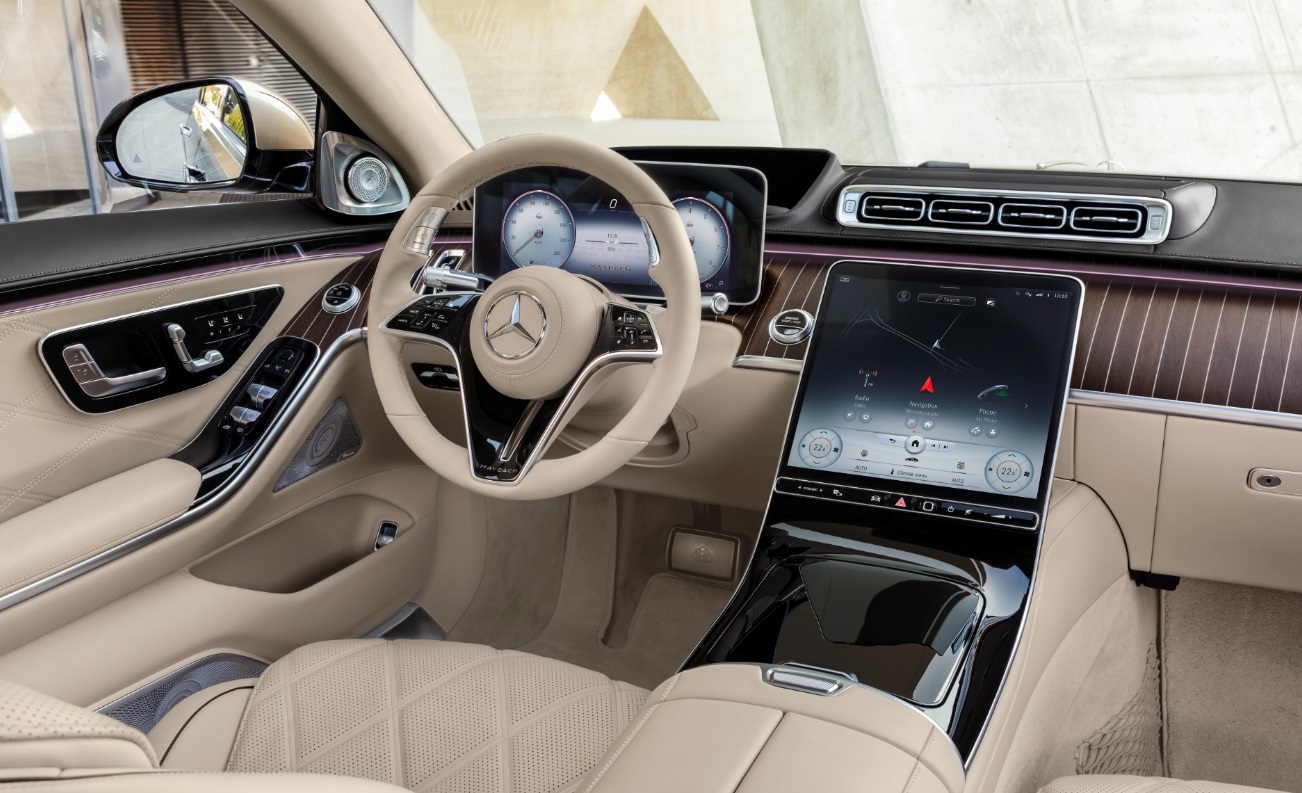 The engines of the new Maybach, still a mystery

The new Mercedes-Maybach S-Class will initially hit the showrooms in Germany. Starting with the second half of 2021, the luxury saloon will be able to drive in conditionally automated mode with the new Drive Pilot (optional equipment), in situations where traffic density is high or in tailbacks on suitable motorway sections.

Surprisingly, Mercedes keeps the engines under wraps. But the premium car maker had previously confirmed that the V12 engine would remain exclusively under the Maybach’s hood. Of course, we expect also a V8 which is not yet available on the S-Class.