Everything about the 2017 Mercedes E-Class. The most intelligent business saloon (47 pics+video)

Everything is new about the 2017 Mercedes E-Class: the fresh multimedia concept, the modern platform, the extensive range of safety and assistance systems and the new 4-cylinder diesel engines generation.

As we already announce in world premiere last week, the new E-Class is more spacious than its predecessor. Its wheelbase has grown by 65 mm (2,939/2,874 mm) while its overall length has increased by 43 mm (4,923/4,880 mm). Built on the same MRA platform like the C-Class, the new E-Class body is stiffer and lighter and uses a higher proportion of aluminium and ultra high strength steel components but Mercedes does not mention with how many kilos the new E-Class is lighter. Some sources has announced that the new E-Class is up to 70 kg lighter depending on the version.

Mercedes mentions that the new E-Class has a record breaking drag coefficient of only 0.23. 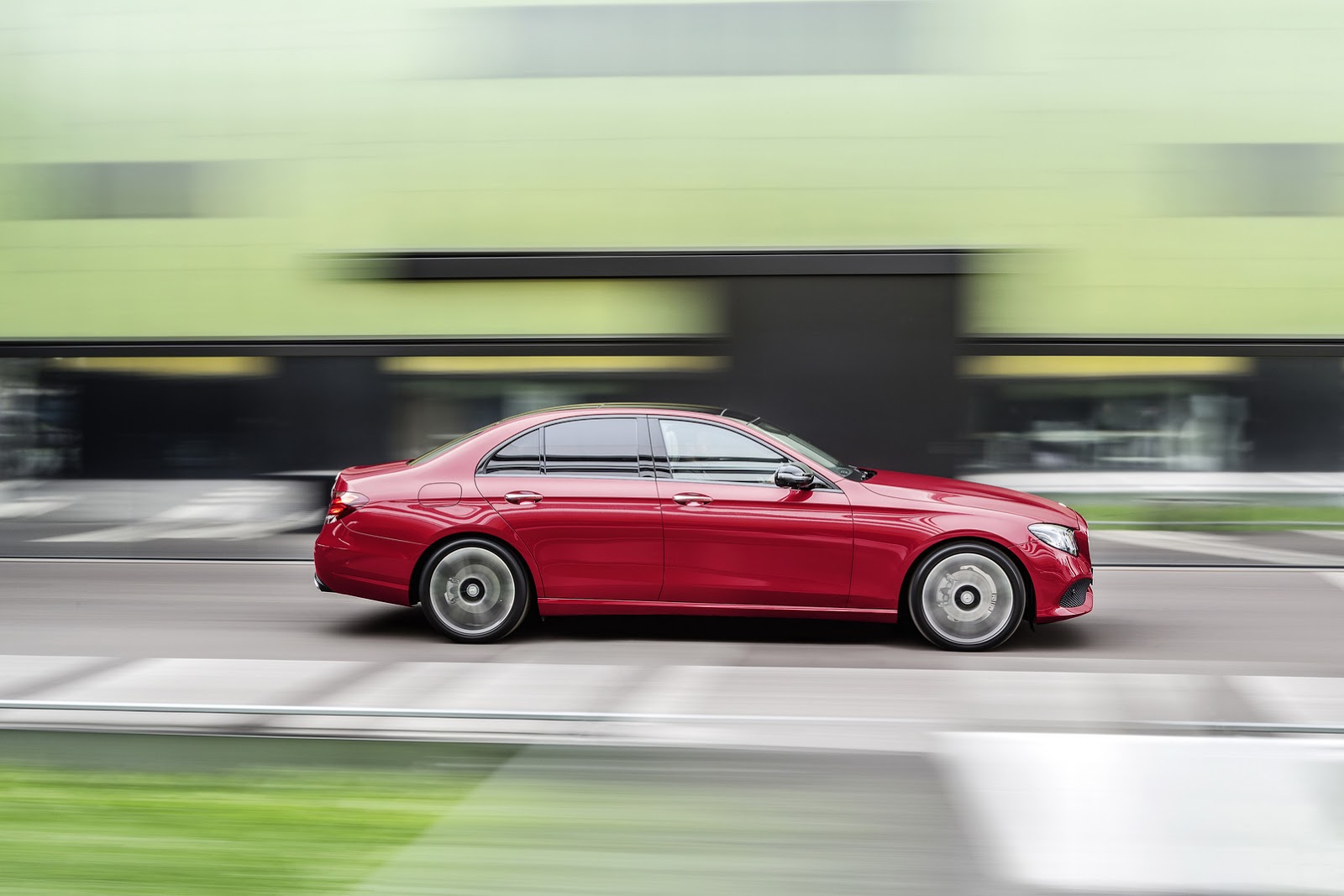 Three equipment lines will be offered:

– Exclusive line with the same radiator grille like base version

– Avantgarde and AMG Line features the sports radiator grille with a large Mercedes star in the center.

The Comand Online multimedia system is completely new and offered in option two next-generation high resolution displays each (1,920 x 720 pixel) with a wide screen 12.3 inch diagonal – a world premiere in this segment.
One of the 12.3 inch displays presents the virtual instruments in the direct field of vision of the driver. For the first time at Mercedes, the instrument cluster can be configurated in three modes: Classic, Sport and Progressive.
Another world premiere is the touch sensitive control buttons (Touch Control) on the steering wheel. Like a smartphone interface, these buttons respond precisely to horizontal and verttical swiping movements, allowing the driver to control the entire infotainment system using finger swipes without taking their hands off the steering wheel. 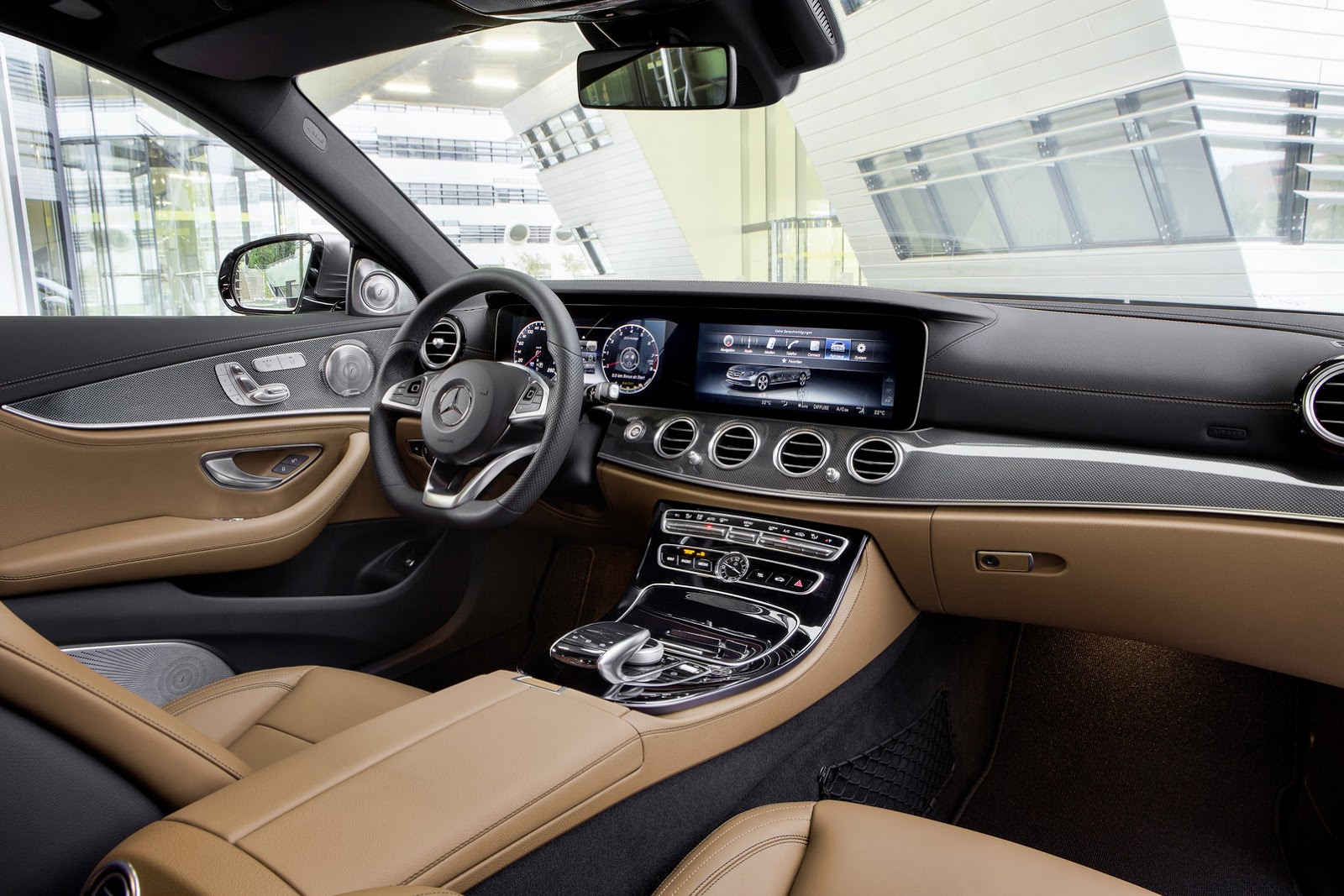 The mobile phones can be charged and connected to the vehicle’s exterior antenna without any cables or telephone holder. The wireless inductive charging system works with all mobile devices that either support Qi standard. The charging pad built in the stowage facility at the front of center console is compatible with mobile phones with a screen diagonal up to 6 inch. 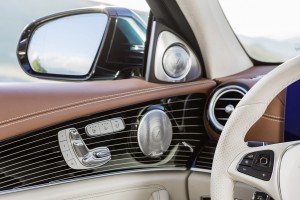 The Frontbass system for audio systems is standard in the new E-Class. It uses the space in the cross member and the side member of the body structure a sa resonance chamber for the bass speakers. The top audio system is 23 loudspeakers Burmester high-end 3D surround.

The new ambient lighting system has 64 colours and offers the possibility to personalize the interior around the trim parts, central display, front stowage facility of the central console, door pockets, front and rear footwells.

As in the S-Class, Mercedes E-Class offers high class seats which include as optional Heat Comfort package – a world premiere in the segment (include heated armrests in the doors and on the centre console). 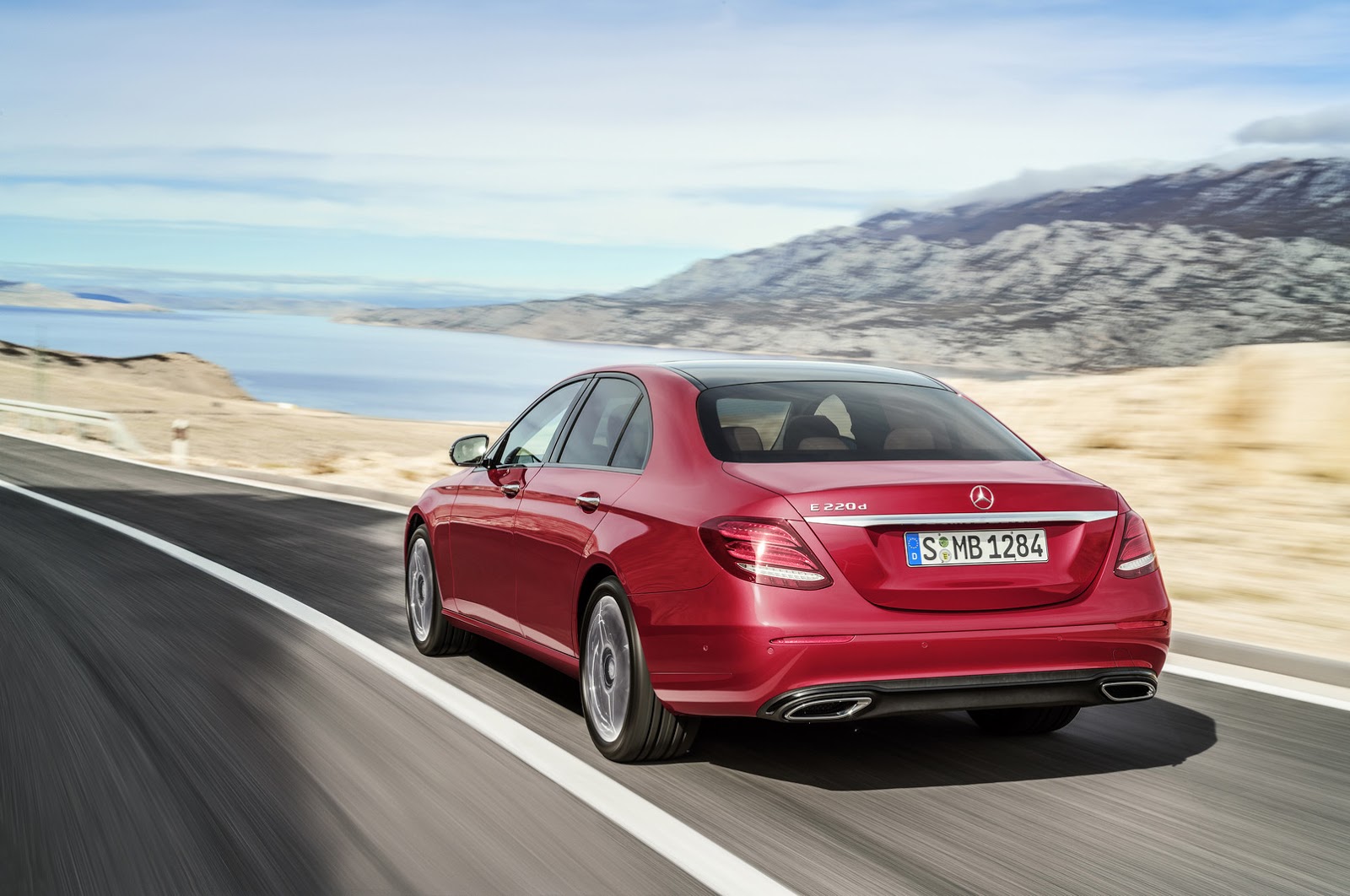 The range of petrol engines will comprise four cylinder versions with output ranging from 184 HP (E 200) to 245 HP and a six cylinder with 333 HP (E 400). All petrol and diesel engines has turbo and direct injection. 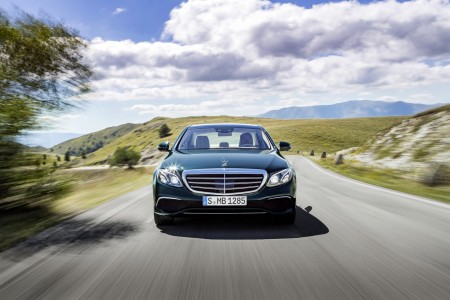 The new four cylinder 2.0 liter diesel units marks the birth of a new Mercedes engine family. The new OM 654 generation of diesel engines is shorter and compact, thanks to a cylinder spacing of only 90 mm instead of 94 mm.

Despite having a smaller displacement than the 2.2 liter predecessor, the new 2.0 liter has an output of 195 HP in E 220 d and the NEDC combined fuel consumption is exceptionally low at just 3.9 l/100 km (102 g/km CO2). This consumption value is achieved until now only by much smaller vehicles.

The engine features the cylinder head and crankcase made of aluminium and use a single stage turbocharging and variable turbine geometry. The Nanoslide surface coating developed by Mercedes reduces the friction between the cylinder surface and steel piston. All engines available at launch are mated with the new 9G-Tronic nine-speed automatic transmission as standard. 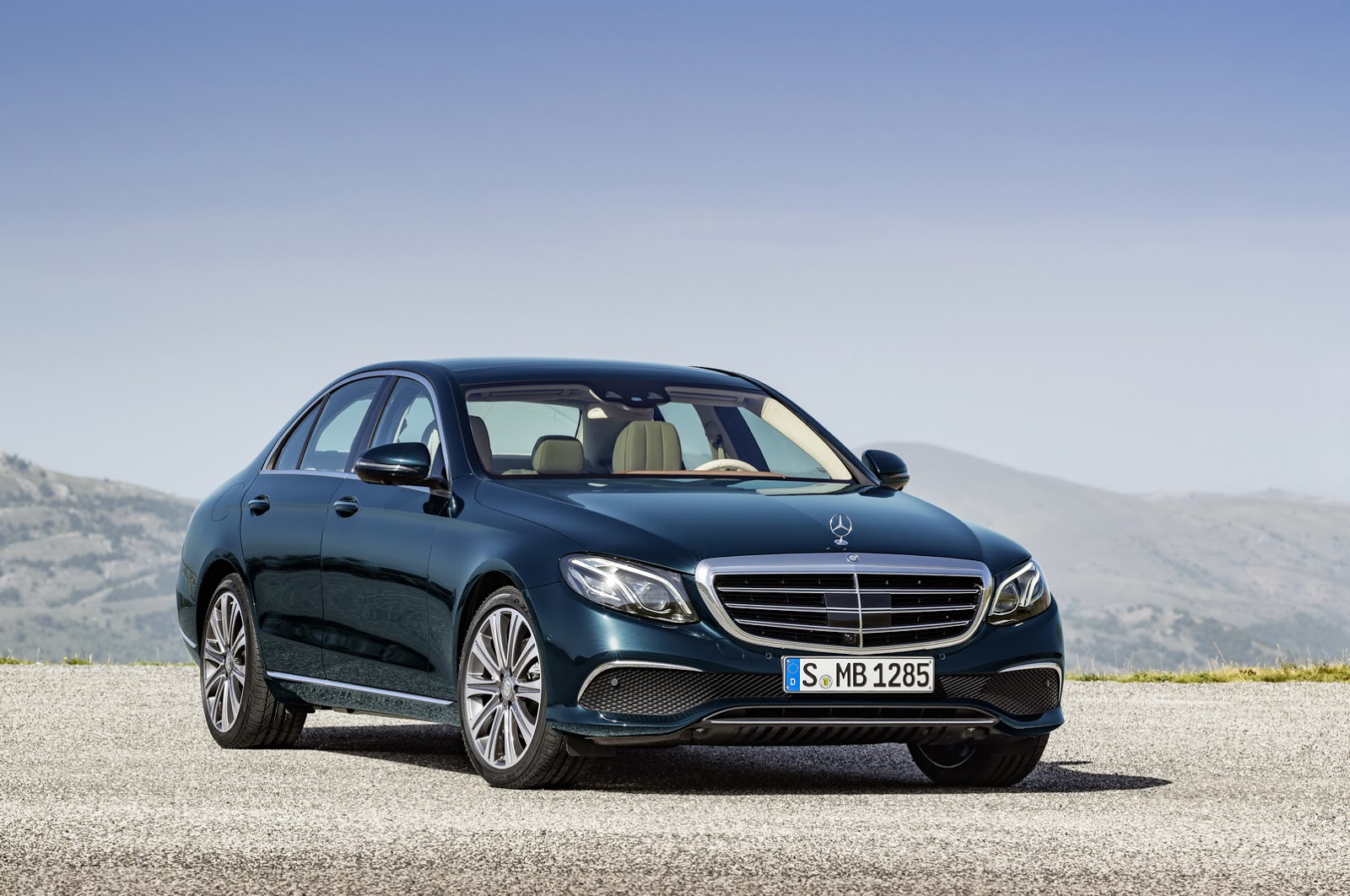 Here is the list of the engines with the first official technical data.

Based on the same MRA platform used also for the C-Class, the new Mercedes E-Class can be configured with four types of suspension:

– Comfortable Avantgarde suspension with a sportier character, lowered by 15 mm

– Air Body Control multi chamber air suspension features three stage adjustments, all round self levelling for excellent ride control and the possibility to adjust the ground clearance. It controls the ride height automatically depending on the speed and reduces fuel consumption on the motorway by lowering the vehicle. On poor roads, the ground clearance can be increased at the push of a button. 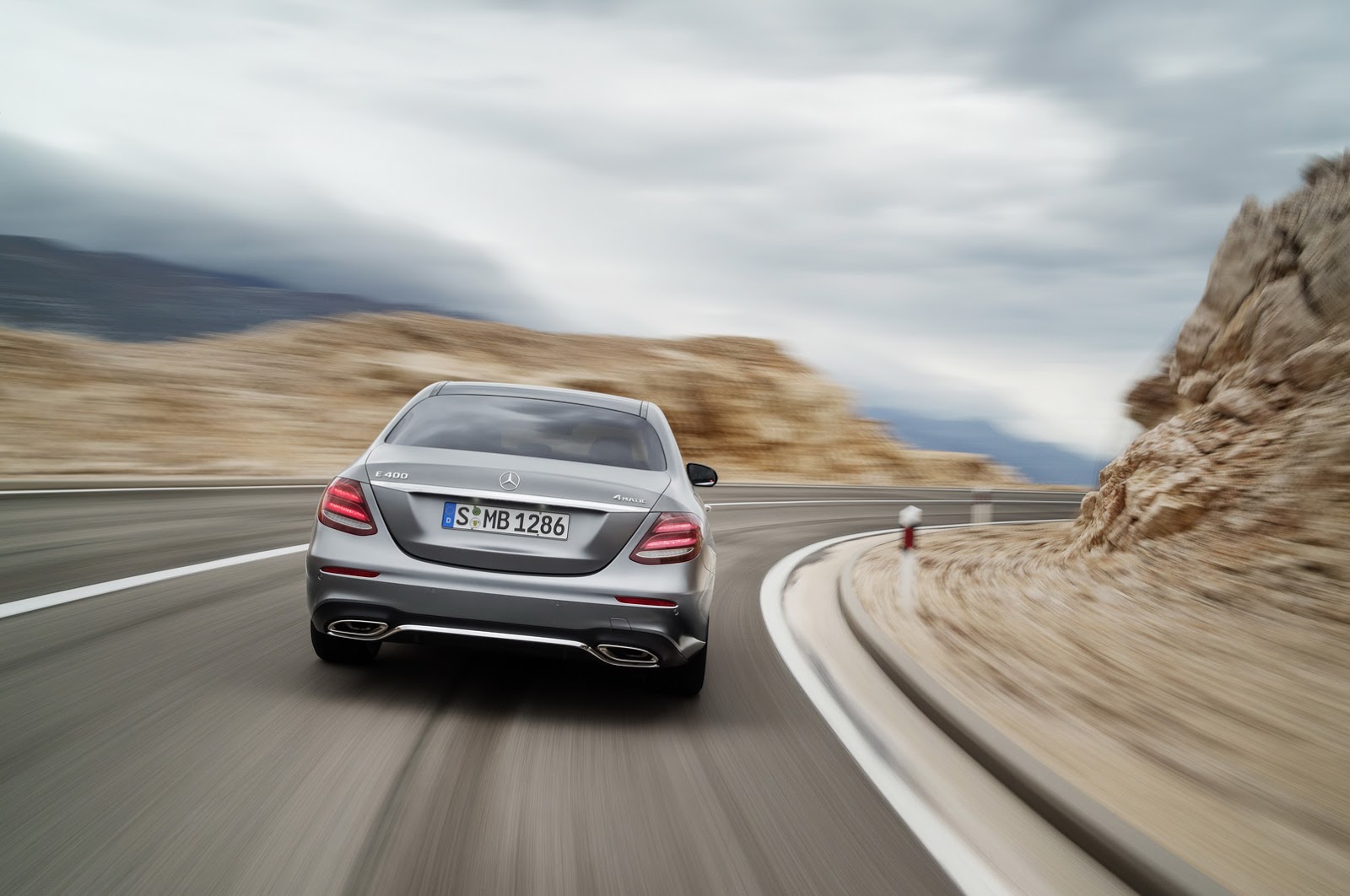 The new Mercedes E-Class has a unique and innovative range of assistance systems:

– Drive Pilot: This system represents Mercedes-Benz’s next step along the road to autonomous driving. As Distance Pilot DISTRONIC on motorways and country roads, it is not only able to keep the car the correct distance behind vehicles in front automatically, it can also follow them at a speed of up to 210 km/h for the first time. This can make life easier for the driver, who no longer needs to operate the brake or accelerator pedal during normal driving and also receives plenty of steering assistance from the Steering Pilot – even on moderate bends. Another unique feature at speeds up to 130 km/h is the fact that, like in a swarm, the system can continue to intervene actively by taking account of surrounding vehicles and parallel structures, even if the lines are unclear or non-existent, like at road works. The system therefore makes driving much easier, especially in traffic jams or heavy congestion. Another feature that helps to relieve the workload on the driver in such situations is the extended restart function, which allows automatic starting of the vehicle within 30 seconds following a stop initiated by the Distance Pilot DISTRONIC on motorways or similar roads.Further new development designed to relieve stress: in combination with COMAND Online, the selectable Speed Limit Pilot subfunction can autonomously adjust the vehicle’s speed in response to camera-detected speed limits or speed limits logged in the navigation system, e.g. 50 km/h in built-up areas or 100 km/h on country roads. Additional DRIVE PILOT innovations include, for the first time, an Active Lane-change Assistant. This radar- and camera-based assistance system assists the driver when changing lanes on multi-lane roads and can steer the vehicle into the lane selected by the driver – when overtaking, for example. Once the driver has indicated to turn for at least two seconds, the Active Lane-change Assistant assists with steering into the adjacent lane if it detects that the lane is unoccupied.
– Active Brake Assist with cross-traffic function: Compared with the standard version, this system has extended speed thresholds with respect to vehicles and pedestrians. Furthermore, it can detect crossing traffic at junctions and, if the driver fails to respond, apply the brakes autonomously. For the first time, it can also detect hazardous situations at the tail end of traffic jams where there is no room to manoeuvre and initiate autonomous braking far sooner in such situations. Consequently, it is possible to completely avoid accidents at speeds up to 100 km/h or substantially reduce the severity of accidents at speeds above this level.

– Evasive Steering Assist: This likewise new system ideally complements the pedestrian detection function of Active Brake Assist. When the driver deliberately or instinctively performs an evasive manoeuvre in a dangerous situation, this function can assist by adding precisely calculated steering torque to support the movement of the steering wheel. This helps the driver to avoid the pedestrian in a controlled manner while subsequently facilitating the straightening-up of the vehicle to allow the situation to be negotiated safely.

– Advanced assistance systems: The intelligent assistance systems in the new Driver Assistance package also include proven systems that have been further developed in terms of their mode of operation and the sensors they use. Active Lane Keeping Assist can help stop the driver from unintentionally changing lane, this being done by corrective one-sided application of the brakes, including in the case of broken lines and risk of collision, e.g. with oncoming traffic or fast overtaking vehicles. Active Blind Spot Assist can now also warn of the risk of a lateral collision in typical urban traffic at low speeds and, as before, correctively intervene at the last moment to prevent a collision at speeds above 30 km/h. PRE-SAFE®PLUS can protect against collisions with traffic following behind and their effects on the occupants.

– Remote Parking Pilot: For this first time, this system allows the vehicle to be moved into and out of garages and parking spaces remotely using a smartphone app, enabling the occupants to get into and out of the car easily, even if space is very tight.

– Car-to-X communication: In 2013, Mercedes-Benz was the first manufacturer to introduce widespread car-to-car networking in the form of a retrofit solution. This is now to be followed by the logical next step as the world’s first fully integral Car-to-X solution goes into series production. The mobile phone-supported exchange of information with other vehicles further ahead on the road, for example, can effectively allow the driver to “see around corners” or “through obstacles” well in advance. This means that the driver receives an earlier warning than previously in the event of imminent danger, such as a broken down vehicle at the edge of the road or also in the event of heavy rain or black ice on the road ahead. In this case the new E-Class simultaneously acts as a receiver and a transmitter, since warning messages are conveyed automatically by evaluating vehicle statuses or manually by the driver to the backend.

– PRE-SAFE® impulse side: This system is part of the Driving Assistance package PLUS. If a lateral collision has been detected and is imminent, it moves the driver or front passenger away from the danger zone in a sideways direction by way of precaution. To do this, the system inflates an air chamber in the side bolster of the front seat backrest nearest the side of the imminent impact in a fraction of a second, thus increasing the distance between occupant and door and, at the same time, reducing the forces acting on the occupants.

– PRE-SAFE® Sound: This system is based on a human reflex in the inner ear, called the stapedius reflex. PRE-SAFE® Sound emits a short interference signal through the vehicle’s sound system if the risk of a collision is detected. This signal can trigger the natural reflex and thus prepare the occupants’ ears for the expected sound of the accident.

– Digital Vehicle Key: This drive authorisation system uses Near Field Communication technology and allows the driver’s smartphone to be used as a vehicle key.

The new high-resolution MULTIBEAM LED headlamps, each with 84 individually controlled high-performance LEDs, automatically illuminate the road with a  precision-controlled distribution of exceptionally bright light – without dazzling other road users. That’s because this grid allows the light distribution of the left and right headlamps to be controlled separately and adapted to the changing situation on the road quickly and dynamically. All functions of the Intelligent Light System in low-beam and high-beam mode can furthermore be depicted purely digitally and without mechanical actuators for the first time, including, as a world first, a purely electronically implemented active light function.