The new Mercedes-Benz GLA teased. When will it debut?

The new Mercedes-Benz GLA is inching closer to its debut, scheduled for December. The smallest crossover of the premium car company will be more spacious and will offer more luxurious features compared to the generation it replaces.

Mercedes-Benz has started the countdown for its upcoming GLA, ahead of what the company calls “Digital World Premiere”. The countdown on the media webpage shows the contour of the GLA in the background. The dots that make up the model do not reveal much of the design details, but one thing is for sure: the crossover will receive a third quarter window, an aspect that will make it look more like an SUV than a lifted compact car. This is also confirmed by the spy photos from the past few weeks, that show the car heavily camouflaged. 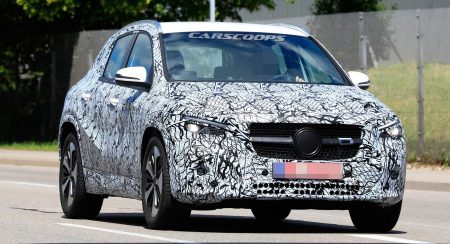 Mercedes reports that the car will be 20 millimeters (0.8 inches) shorter and 100 millimeters (3.9 inches) taller than its predecessor, while the wheelbase is expected to grow by 30 millimeters (1.2 inches), which translates into more legroom for the rear passengers.

The engine range will now include the new 1.3-liter four-cylinder unit, developed with the Renault-Nissan Alliance, and already making its rounds in the Mercedes compact range. A 2.0-liter four-cylinder will also be there, together with a 1.5-liter and a 2.0-liter diesel engines, the latter in two output variants.

Similar to the A-Class, the GLA will also benefit from the presence of a sportier variant, the GLA 35, while the GLA 45 and the GLA 45 S, powered by the most potent 4-cylinder engine ever used for series production, will top the range.

The new Mercedes-Benz GLA will debut on December 11th joining the already updated SUVs of the company, the GLC, the GLE and the GLS and the new compact 7-seats GLB. Only 18 days are left and 5 hours are left, the official countdown says.