The new Jaguar I-Pace: the luxury middle size EV SUV to beat by the Mercedes EQC

Jaguar unveiled on March 1 in London the series production version of its first EV model. The Jaguar I-Pace is a middle size SUV to compete with the future Mercedes EQC.

The new Jaguar I-Pace has almost the same proportions with the future Mercedes EQC: 4,682 mm length, 1,895 mm width and 1,565 mm height, while the wheelbase has a huge value of 2,990 mm. Jaguar I-Pace has a similar footprint to the Jaguar F-Pace with interior space of a large luxury SUV.

There are also a lot of similarities between the platform and the propulsion system of the two premium midsize SUVs.

Two Jaguar designed synchronous permanent magnet electric motors drive the front and rear axles. Each motor fits concentrically around a compact single speed epicyclic transmission and differential. Each electric engine delivers 200 HP and 348 Nm with a total of 400 HP and 696 Nm. The traction is 4WD electric without propeller shaft.

The Mercedes EQ C is powered by two electric engines on the front and rear axle creating an electric all wheel drive system with variable torque distribution of up to 100% on each axle. The total output is 408 HP while the maximum torque reach 700 Nm.

Jaguar announced an acceleration from 0 to 100 km/h in only 4.9 seconds, while Mercedes promise a sub 5 seconds, at the level of the Mercedes-AMG GLC 43. 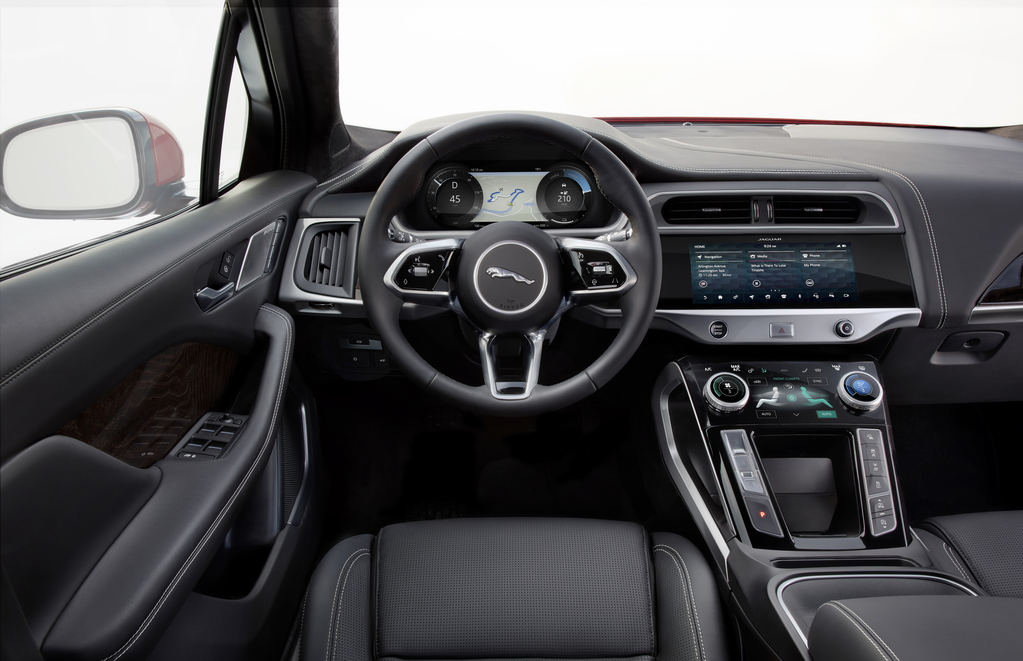 With a state-of-the-art 90kWh Lithium-ion battery placed between the axles, the Jaguar I-PACE delivers a range of 480km (WLTP cycle). I-Pace is the first electric car which published consumption figures using the new WLTP Cycle. Owners will be able to achieve a 0-80 per cent battery charge in 40-minutes using DC rapid charging (100kW). Home charging with an AC wall box (7kW) will achieve the same state of charge in just over ten hours– ideal for overnight charging.

The new Mercedes platform EVA will accommodate the lithium-ion batteries in a structure placed between the axles which will have 4.5 sqm and 13 cm high. The batteries were positioned in an ideal position between the axles because there is no any propeller shaft. Mercedes will use a modular system for the batteries with a maximum capacity of 110 kWh. With the most powerful battery, Mercedes promise a range of up to 500 km.

Mercedes will offer the choice for different battery capacities from 70 kWh, 85 kWh and 110 kWh.

Jaguar announced officialy the base price of  63,497 pounds, which is equivalent 71,239 euro. Mercedes estimates a base price of around 60,000 euro but is hard to believe that the Mercedes EQC will be more than 10,000 euro cheaper than Jaguar I-Pace.

The new Jaguar I-Pace is produced by Magna Steyr in Graz, Austria, while the Mercedes EQC will be produced in the Mercedes factory from Bremen.

Both Mercedes EQC and Jaguar I-Pace are smaller than the Tesla Model X and are not direct rivals for the big class EV SUV from Tesla.
Tesla also plans a Model Y middle size EV SUV which is still far away because of Tesla Model 3 production shortage.