The new BMW 7 Series is here and… it’s OK

There was a lot of hype surrounding the launch of the new 7 Series BMW – most of it built up by BMW themselves – and now the Bavarian limousine has finally been officially launched.

That “OK” in the title can be interpreted in two ways, both being true at the same time: first, it can mean that the new car turned out to be OK, since there’s really nothing bad about it; second, it’s also OK for the Mercedes-Benz S-Class since the top of the range Beemer, even though it came almost two full years later, isn’t a game changer – it’s more of an evolution than the revolution the current S-Class turned out to be.

The main emphasis is put on the technology inside, and by looking at the exterior design it’s plain to see why: the new 7 Series is pretty drab looking like a bigger 3 Series with an oversized bonnet. It’s by no means ugly, it just lacks that classy, distinctive presence a car of this magnitude should have.

On the other hand, it wouldn’t be the first BMW that ends up looking a lot better in real life than in pictures, so we save our final judgement for that day. 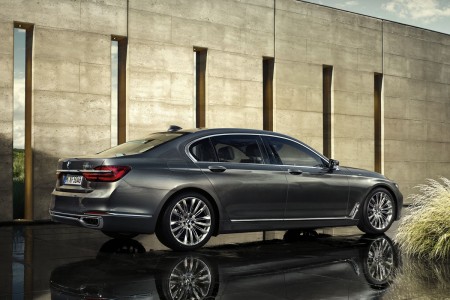 The interior, on the other hand – and this is what these cars are all about – looks a bit too childish, with a weird mix of materials, way too much bare metal and way too little change. It’s true that the new 7 Series comes from the start with the option of choosing between the M Sport package, the Pure Excellence package and BMW Individual Design Composition, three options which allow a lot of room for personalization – especially the latter.

Driving dynamics have always been key for the BMW brand, so the new 7 Series makes no exception. Pivotal for a car this large is keeping its weight under control and BMW have done that with what they call BMW EfficientLightweight, a series of technologies devised and implemented with just this goal in mind. Responsible for a weight loss of as much as 130 kilograms compared to the previous model is the Carbon Core body structure, a feature derived from the electric i cars which uses a mix of CFRP (carbon fiber reinforced plastic), steel and aluminium. 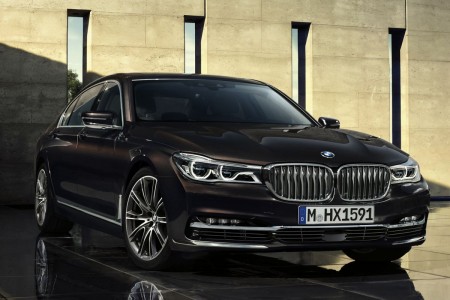 But if power is nothing without control, you can’t really control anything if there’s no power, so a closer look at the engines available is in order. As stated previously, the new 7 Series comes with two petrol engines, one diesel and a hybrid version. First up, from top to bottom, is the 750i xDrive which uses a 4.4 twin-turbo V8 engine good for 450 hp, 650 Nm and a quoted 4.4 seconds 0-100 km/h sprint. Further down the line is the 740i which uses a straight-six twin-turbo engine with 326 hp, 450 Nm and a 5.5 seconds 0-100 km/h sprint. The only diesel version is the 730d which also uses a three liter straight-six twin-turbo engine, but this one develops 265 hp and 620 Nm, enough for a 6.1 (5.8 for the xDrive version) seconds 0-100 km/h acceleration time. Last but not least is the hybrid 740e with its concoction of an electric motor and  a four pot two liter twin-turbo petrol engine for a total system output of 326 hp and a 5.6 seconds sprint. All cars have a 250 km/h limited top speed and some fuel consumption numbers I’m not even going to give you because we all know they’re completely irrelevant. 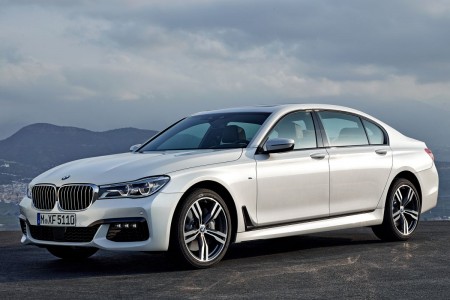 The new BMW 7 Series comes standard with a two-axle air suspension with automatic self leveling and Dynamic Damper Control, which are just some of the many features, optional or standard, meant to offer the perfect balance between comfiness and sportiness. Electromechanical anti-roll bars reduce body roll under dynamic cornering and the active chassis control system adapts the dampers’ responses to ruts and bumps in the road.

But what BMW is really bringing forward is the technology available directly to the driver and the other cabin occupants. For the first time in a BMW (even though we knew this for quite some time now), the main screen at the top of the dashboard is touch sensitive, which means it can now be operated through the iDrive console as well as straight with your hand. There is also a third option – which only has a limited number of uses, though – which involves a 3D sensor and you moving your arms around: we’re talking about gesture control. Another novelty for any car is the ability to wirelessly charge your smartphone by placing it inside the specially designed holder in the centre console. 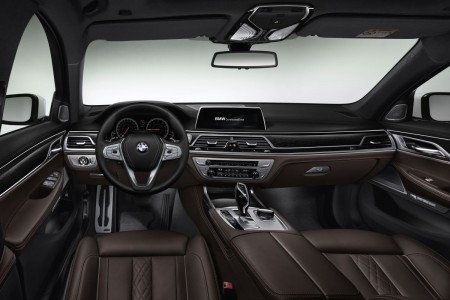 The long wheelbase versions (signalled by an “l” inserted between the numerical part of the name and the letter denoting the propulsion type – 740Li, for example) specified with the optional Executive Lounge get “levels of comfort a class apart”. This includes Automatic air conditioning with 4-zone control, Electrically adjustable comfort seats with massage function in the rear and Active seat ventilation for all seats, plus the optional Executive Lounge Seating, Executive Lounge rear console and Rear-seat entertainment. The Executive Lounge rear console houses a fold-out table, additional cupholders and the Touch Command system. This removable 7-inch tablet computer allows the user to control the infotainment and comfort functions available in the rear of the new BMW 7 Series and can also be used to play back external audio and video files, as a games console or to surf the internet.

Another unique feature for the long wheelbase versions is the Sky Lounge Panorama glass roof. When it gets dark, the light emitted from side-mounted LED modules is directed evenly onto the glass surface, where it hits an imprinted graphic. This creates an atmospheric motif mimicking a starry sky.

The atmosphere is rounded off by the Ambient Air package, which ionises the air and diffuses one of a selection of eight aromas, but also by a new Bowers & Wilkins Diamond surround sound system, which has been specifically tuned to the interior of the new BMW 7 Series. 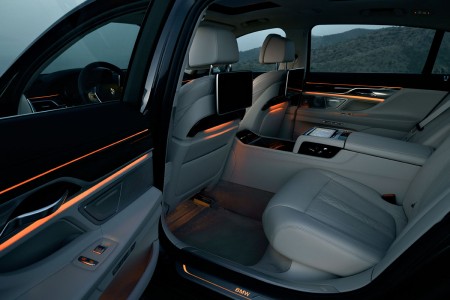 The list of novelties goes on with the self parking ability of the new BMW 7 Series which can get in and out of forward-parking spaces or garages without anyone at the wheel. Also unique for this segment is the BMW Laserlight which was first introduced on the i8 hybrid sports car. Thanks to BMW Selective Beam, this is dazzle-free and can be specified for the new BMW 7 Series as an alternative to the standard full-LED headlights. The laser headlights generate a particularly bright, pure white light as well as providing a high-beam range of 600 metres, double that of the LED headlights.

The Steering and lane control assistant, Lane keeping assistant with active side collision protection, Rear collision prevention and Crossing traffic warning functions have been added to the Driving Assistant Plus system. Meanwhile, the Traffic jam assistant – which involves semi-automated driving – can be used on any type of road. And the Active Cruise Control with Stop & Go function now only requires drivers to press a button to incorporate speed restrictions detected by the Speed Limit Info function. The new generation of the Surround View system now also includes a 3D View and Panorama Side View option in the Control Display. 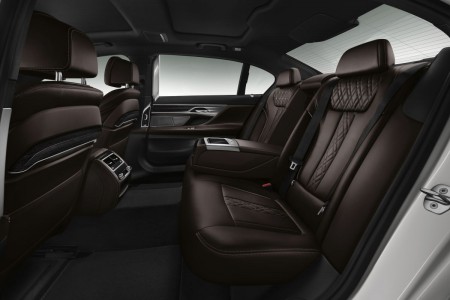 The BMW 7 Series looks like a pretty nicely rounded package, but it remains to be seen if it will be enough to upset the Mercedes-Benz S-Class. Despite its plethora of gadgets, you can’t help but feel a little disappointed, as though you were expecting more from a car that promised to revolutionize the automotive industry. In the end, though, it all comes down to how the car is on the road, not on paper, so as I’ve said earlier, we reserve our final judgement for after we’ve driven it and played with all its tech. And for that, keep watching this space.