The iconic Triumph Scrambler ridden by Chris Pratt in the summer blockbuster ‘Jurassic World’ is auctioned by Triumph Motorcycles. The Triumph bikes have been the favorites of Hollywood stars like Marlon Brando and recently Bradley Cooper, George Clooney and Ryan Reynolds.

The auction of the super motorbike that Chris Pratt saddled up on, starts today. The two-wheeler starred next to the GLE Coupe, the Unimog and the G-Class 6×6 in the movie that just went up to number #4 in the US all time box office list, by hitting $600 million this past weekend. Only „Avatar”, „Titanic” and „The Avengers” are ahead of it.

And of course, the bike comes with a super background: it can tame the raptors, it can run faster then them in the complete dark and off-road conditions of the jungle and can be part of special effects. The motion pictures had plenty of those! 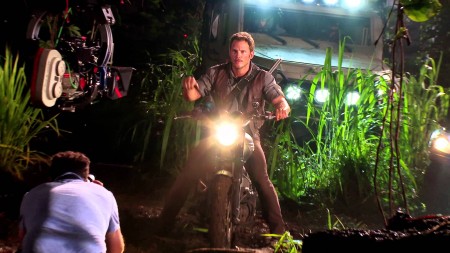 The auction that is starting today on eBay will be running for the next ten days, to raise funds for a charity cause. All money will be donated to Triumph’s partner, The Distinguished Gentlemen’s Ride, to support prostate cancer research. Last year, the organization raised $2 million dollars for global medical research and they are hoping to get $3 million this year, from events set up in 80 cities worldwide.

The lucky winnner shall also get a certificate of authenticity to show off when he meets friends in town. And he or she shall have another reason to brag about. Only three custom Scramblers were made for ‘Jurassic World’, according to Motorcycle USA. After they finished shooting the movie, one was presented to the raptors trainer, Chris Pratt as a gift, the second one went on display at the Triumph headquarters in the UK and the third could be yours, if you outbid all other Jurassic/Chris Pratt/iconic bikes fans!