The Mercedes-Benz V-Class MPV gets the AIRMATIC suspension

The Mercedes-Benz V-Class MPV gets the innovative AIRMATIC suspension. The equipment comes follows the facelift improvements.

The facelift improvements list includes a new front end, an extended range of safety and assistance systems, but also the addition of the OMG 654 four-cylinder diesel engine. The power unit transfers power and torque via the 9G-TRONIC automatic transmission.

The MBUX infotainment system is also standard equipment on the Mercedes-Benz V-Class facelift. Customers will now be able to order the MPV with the AIRMATIC suspension. 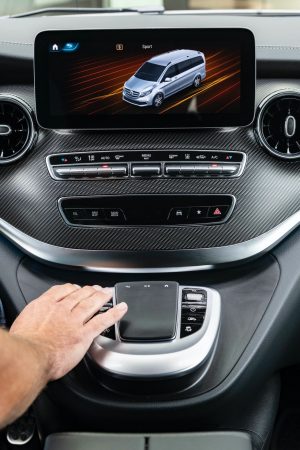 What are the benefits of the AIRMATIC suspension on the Mercedes-Benz V-Class?

The AIRMATIC suspension brings extra comfort on all types of driving surfaces. It also reduces noise level onboard and fuel consumption at high speeds. The driver will be able to select the right setting via various driving programs.

The double frequency-selective damping control regulates itself independently on each wheel, according to the conditions of the road. This translates into an improved driving stability and comfort due to reduced body movements.

The driver can control the suspension via the DYNAMIC SELECT switch in the center console. He can choose Comfort or Manual in order to keep the vehicle at its standard height up to a speed of 110 km/h. 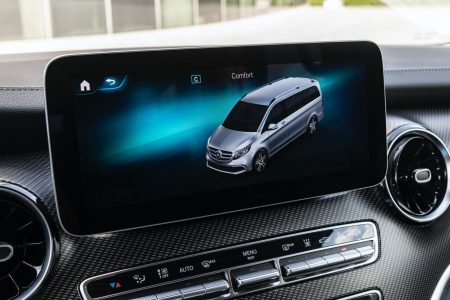 The suspension automatically lowers the vehicle by 10 millimeters, when it drives above 110 km/h, thus ensuring a more dynamic behavior and reducing wind resistance.

The Sport program also lowers the MPV by 10 millimeters, regardless of the speed. The opposite happens in the Lift mode. The vehicle rises up to 35 millimeters at speeds of up to 30 km/h. The program is ideal for the adventures outside the tarmac areas.

The electric EQV also gets the AIRMATIC suspension. It will also be available on the Vito Tourer and eVito Tourer, as well as on the Marco Polo camper van.