One decade after it made an appearance on the road, the exclusive sports car Mercedes-Benz SLR McLaren is still the darling of aftermarket companies, as they fall for it over and over again. It is no wonder, since the SLR has a huge potential of reinventing its looks, that sports cars of today can only imitate, like the elongated hood and the short rear end. 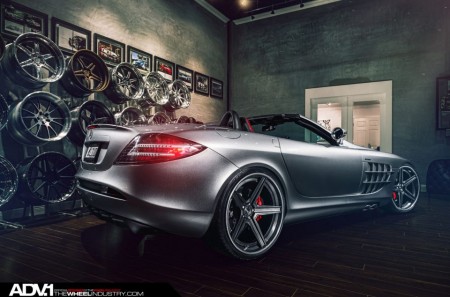 Even though this vehicle, out of production starting 2010, is flashy enough on its own, ADV. 1 Wheels decided to spice up its countenance a little bit. And they found just the right accessories for it: ADV5 TS CS polished gunmetal wheels with polished matte smoked finish and matte black logos. Above those 21×10 at the front and 22×12.5 at the rear, the paintwork is doing its job: get attention, that is. 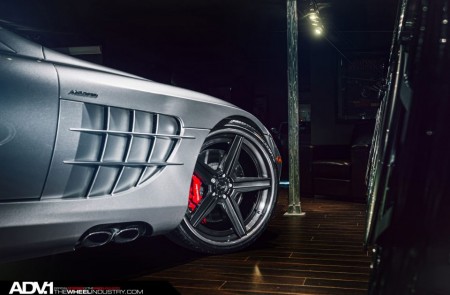 On the inside (can we even say that about a drop-top?), the roadster sports seats in red leather and the SLR logo engraved in a very simple (compared to today’s) center console.

The roadster version of the Mercedes-Benz SLR went on sale in September 2007. It is powered by the same supercharged V8 AMG engine as coupé siblings, which develops 617 HP. It needs 3.1 seconds to go from a standstill up to 100 km/h and it reaches a top speed of 334 km/h (208 mph).