You step inside and it hits you. You are there, you are really there, inside the Mercedes-Benz Museum, a genuine shrine for the car enthusiasts. You press the button inside the capsule-like elevator and it slides up the vertical rails, accompanied by the sound of a racing car, straight to the top. The time travel starts spiraling down the history of Mercedes-Benz.

Once you get off the elevator, you meet the one and only. The white horse, as a symbol of saying goodbye to horse-drawn carriages. “I do believe in the horse”, said Emperor Wilhelm II. “The automobile is no more than a transitory phenomenon.” Well, if he only knew… Are we glad he was wrong, cause the so-called “transition” has been lasting for over 130 years and counting. 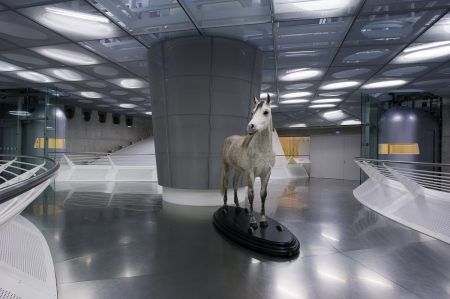 The world of magic and stars begins with – like every story naturally does – with “Once upon a time…”. So once upon a time, Carl Benz and Gottlieb Daimler, far-located and far from knowing each other, were building the world’s first cars. Daimler’s imagination designed the world’s first four-wheeled car. Him and Maybach installed their high-speed engine, the so-called Grandfather Clock. It developed 1.1 horsepower (yes, you read that well, we did not miss any figure) and a maximum speed of 18 km/h (11 mph). The Benz Patent Motorwagen was the world’s first gasoline-powered car. Carl Benz designed it as a three-wheeler. He would just not be satisfied with the steering available for the four-wheel vehicles in 1886. 0.75 horsepower and a top speed of 16 km/h (10 mph) were the figures that bring a skeptical smile upon our face today. Replicas of their creations are both standing proud on rotating platforms, like a confirmation that the time traveling begins. 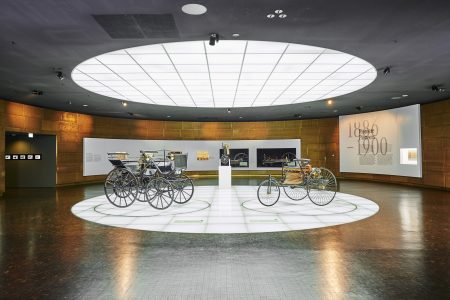 The history-reversing machine leads you to the hall of the cars that hit the road more than a century ago. Shining in their glorious ancestry, they silently tell the stories that our grand-grandparents lived. The Mercedes-Benz Classic Center put the magic wand on them. Impeccable paintwork, flawless upholstery and proportions that make the onlookers feel that they know the secrets of the time passed.

An architectural curve leads the guests to the hall of trailblazers. The legendary Mercedes-Benz Simplex with its 40 horsepower and the larger-than-life double phaeton with 75 horsepower reign the hall with their splendor, glamor and grandeur. You stare and do not dare to breathe. 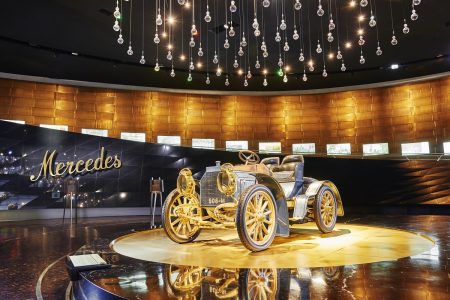 Spiraling through decades, then you step into the land of diesels and superchargers, the attempt of the engineers of those times to make cars more efficient and more powerful. So the Mercedes-Benz Model S and the SSK sports two-seater saw the light of day. The shiny black 260 D Pullman keeps them company in a hora of the legends. 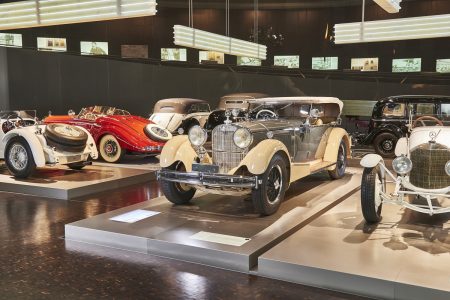 Then we climb down the historical DNA spiral straight into the post-war era. The image displayed makes the viewers freeze. The magnetic Mercedes-Benz 300 SL Gullwing, presented in 1954, with red upholstery and its wing-like doors spread up in the air, accompanied by its candy-red roadster sibling. They are beauties, exhaling glamor, that modeled the world of racing and turned the heads of the mortals, making them witness and chew a piece of the delicious cake that the car industry was at that time. In their shadow, there is the famous 300 SLR Uhlenhaut Coupe, the racer with 302 horsepower and a top speed of 290 km/h (180 mph), that actually never raced. Only two such treasures were manufactured. 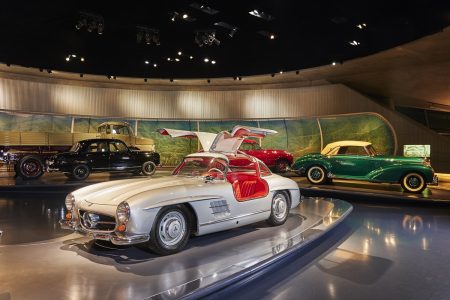 The white staircase than leads to the hall where safety and environment make the rules. A Mercedes-Benz 300 measuring car with an elongated rear side that used to fit tons of equipment, the Mercedes-Benz 220 S, the first one to ever feature crumple zones, the Safety Vehicle ESF 22, the first that got airbags and belt tensioners, the 300 SD – the first to ever get a turbodiesel engine under the hood make up the list of fabulous inventions. 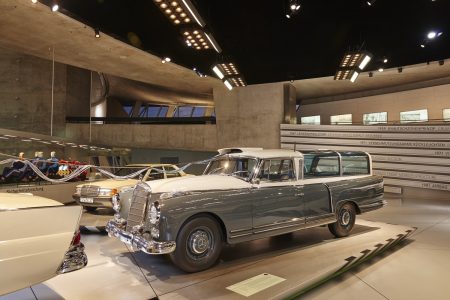 The level “Races & Records” displays the spectacular silver arrows of motor racing, cars with an aura of glory that withstands the time. The latest addition to the family is the car that Nico Rosberg drove to victory to get the Formula 1 World Championship in 2017, before quitting racing. 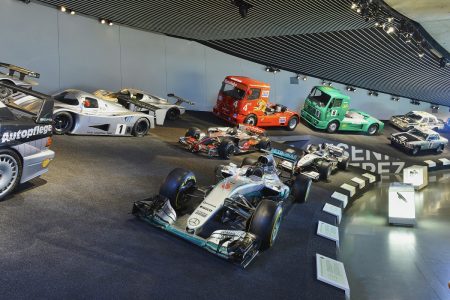 The hall of the VIPs attracts the eyes of the curious just like any other hall in the museum. The royal-blooded Mercedes-Benz 500SL is right there. The Princess was the first to drive a car made outside England. The 190 E 2.3 driven by Nicolas Cage, the 190 SL of the astronaut David Randolph Scott, but also the bulletproof G-Class-based Popemobile that withstood an assassination attempt against John Pole II are in the Gallery of Names. We can’t go step out before taking a look at the first M-Class generation, the ML 320 that starred in the 1997 “Jurassic Park”. 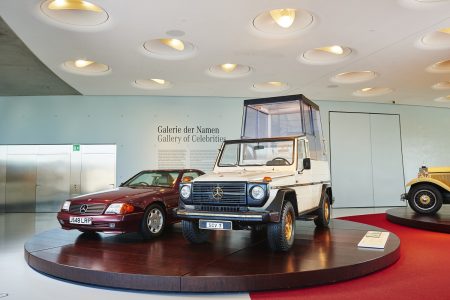 You step outside and take one more look at the building that opened 12 years ago, after having been designed by UN Studio to recall the shape of a Wenkel engine. Architects talk of genoms and DNA spirals, but it is just a moated castle of times passed, that protects priceless treasures and shelters stories that begin with “Once upon a time”. There are 16,500 meters (178,000 square feet) of history that magically wraps the 160 vehicles and exhibited there. A trip down memory lane costs 10 euros and can be taken every day from Tuesday to Sunday, from 9 a.m. to 6 p.m. 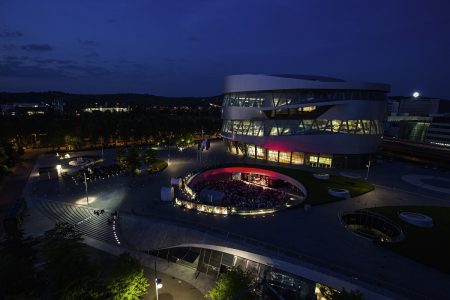 You have been whispering all along, through the corridors of time, trying not to awake the ancestors. They sleep peacefully and smile in their sleep. They all know what is going on out in the street today. And they are content.