The Mercedes-Benz IAA Concept has just been revealed in Frankfurt and has already caught the eye of the digital experts, who are imagining how the car would look in production guise.

After days of not posting anything, Theophilus Chin comes up with this: the semi-productionised impression of the Mercedes-Benz IAA Concept. The photos show how the IAA Concept might look once it gets into production.

The Stuttgart-based company has confirmed that the aerodynamics world holder with just 0,19, the IAA Concept, will be influencing the looks of the next CLS model.

The car that elongates itself at speeds of over 80 km/h by 390 mm comes in the shape of a four-door coupe with sleek lines and a rear familiar from the already popular S-Class and C-Class Coupe. This might as well be the looks of the Tesla Model S rival, promised by Mercedes-Benz. The car might see the light of day by 2018.

The Mercedes concept car is propelled by a petrol engine combined with an electric one, summing up the plug-in hybrid technology with a total output of 205 kW (279 HP). This guarantees an electronically limited top speed of 250 km/h. The car they are planning is supposed to have a total electric range of about 400 – 500 km. 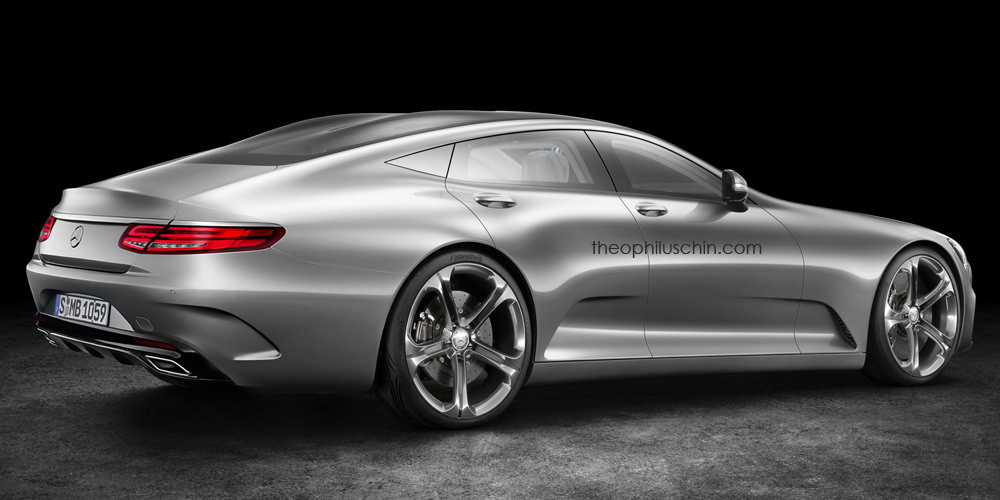 In the digital simulations, the front grille with horizontal LED louvres disappears, as it is replaced by a typically Benz one. The headlights now have a prolate shape, away from the front grille, going up on the bonnet. The show car displayed in Frankfurt brings the already familiar the striking ‘shark nose’ profile, similar to that of the F015 Luxury in Motion. The transition of the louvres into horizontal LED headlamp elements underscores the vehicles powerful, yet sensual and technoid appearance.

The segments that extend the car by 25 mm at the front and 20 mm at the rear to improve the air flow, also found their way out of the semi-productionised version rendered by Theophilus Chin.