The Mercedes-Benz GLA campaign begins – Designed for the wilderness. Enjoyed in the city

Elena Luchian, May 27, 2020
2.88K 0
Home Auto news The Mercedes-Benz GLA campaign begins – Designed for the wilderness. Enjoyed in the city

The Mercedes-Benz GLA campaign begins with a funny approach of the future owners of the model: Designed for the wilderness. Enjoyed in the city.

The campaign launches the idea that the new Mercedes-Benz GLA is capable of climbing the mountains as well as being a reliable city buddy. Breaking the usual advertising clichés, the new model makes a clear reality check. It brings awareness that, even though the car can deal with the off-road, not many owners actually dare to go off the tarmac with it. 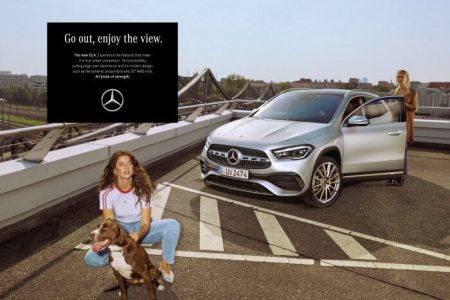 The video with a duration of 20 and 30 seconds, that will play on social media on TV starting June, offers a funny approach of the GLA owners. Once they reach the wilderness, they encounter all kinds of elements that are far off their limits. The seawater turns out to be too cold, seeing a large ostrich face to face turns out to be frightening. Eventually, they resort to the somewhat safer urban environment.

The Anorak agency produced the videos, while Sebastian Strasser directed them. The director has already won more than 150 awards, with 16 Cannes Lions among them. An Academy Award winner for several times, Hoyte van Hoytema, was behind the camera. The surfer in the TV commercial is interpreted by British actor Mark Ryder, known from his starring in movies such as “Robin Hood” and “Borgia”.

The Mercedes-Benz GLA campaign is the restart

The Mercedes-Benz GLA was officially revealed in December 2019. It is 10 centimeters higher and one and a half centimeter shorter, without affecting the kneeroom of the rear passengers.

“With our GLA campaign, we are deliberately breaking with the usual mechanics and messages that have been common for off-road vehicles until now. The truth is that few compact SUVs ever see the wilderness,” says Bettina Fetzer, Head of Marketing at Mercedes-Benz AG.

The Mercedes-Benz GLA campaign is the restart of the Department of Communication. The coronavirus pandemic enforced a two-months break for the entire auto industry.