The Mercedes-Benz 300 SEL 6.8 AMG is turning 50. Half a century of legend, 50 years since it won its first race. It was the 24-Hour race in Spa Francorchamps.

The Mercedes-Benz 300 SEL 6.8 AMG started the race without anyone expecting anything. It was big, it was heavy, it was a debutant. It finished first in its class and second overall. Quite a triumph for an outsider. 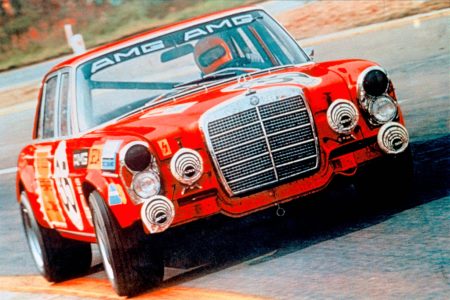 The red Mercedes has its secrets. Werner Aulfrecht and Erhard Melcher were the names behind the development of the car. They were the “A” and the “M” in the “AMG”, while the “G” stood for Grossaspach, Aulfrecth’s birthplace. They fought a lot, they worked a lot, day in, day out. Put heart and time into the project. They had become the single two Mercedes performance engineers at the time in 1967.

The Red Pig was slightly different on the outside

Little made the “Red Pig” different on the outside from the 300SEL, visually speaking. A dashboard in wood, soft carpets on the floor, seats in the rear. It looked like any street-legal sedan. But it came with a steel roll-over bar, bucket front seats and a radio turned into controls for the front rally lights. Aluminium front doors, wider wheel arches to accommodate 335/04 R15 wheels and no bumpers at all. Those made it different. 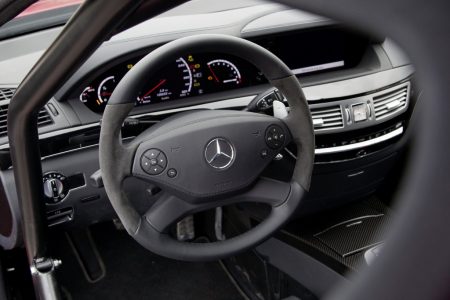 But on the racetrack, in Spa-Francochamps, the 1.5-tone sedan looked like a pig among ballerinas. It soon got a nickname that the developers were not proud of: die Rote Sau” (“The Red Pig”). It had a 6.8-liter V8, derived from the 6.3-liter standard unit, that developed 428 horsepower and 620 Newton meters, instead of the standard 250 horsepower and 500 Newton meters.

Melcher and Aulfrecht had to rebuild it right before Spa. Two weeks prior to the 24-hour race, the car almost got destroyed in a crash.

The car was eventually sold to a French military unit. Therefore, the Red Pig of today is just a replica following the blue prints of the time. It is the car the Mercedes-AMG Petronas Motorsport Team Principal, Toto Wolff, now takes to the racetrack.

The Mercedes-Benz 300 SEL 6.8 AMG – explained by the @MercedesAMGF1 boss himself: Toto Wolff. He shows you why the spirit of our founding fathers Aufrecht and Melcher to do the impossible is in this car and still in our motorsport DNA. #WeLivePerformance pic.twitter.com/cAJ8Tl4RZh