The Mercedes-AMG GT R Roadster becomes the Bussink GT R Speedlegend. It is a speedster with an F1-style halo that urges to pushing the pedal to the metal. And yes, it is real.

The car was designed by Dutch entrepreneur Roland A. Bussink and his team and is based on the Mercedes-AMG GT R Roadster. The sports car maker will only build 750 such units. But the Ferris wheel designer bought not one, but five of them. And five is the number of units that his team has already built with the Bussink GT R Speedlegend designation. Bussink though refers to it as the Speedbow.

The limited-run model series finds inspiration in the SLR Stirling Moss from 2009 and in today’s Formula 1 cars. 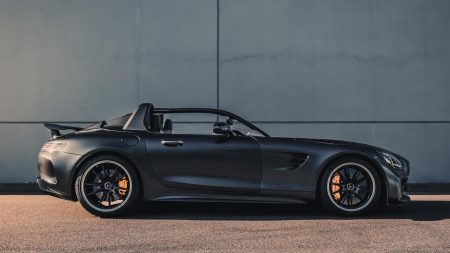 The A-pillars have simply vanished and the side windows are now lower. The Busskink GT R Speedlegend features two “speed domes” with further roll protection behind the newly aerated cabin. Carbon fiber elements and new louvers in the front wings complete the aggressive design.

Buyers were able to upgrade to an even sportier front end, the one of the AMG GT R Pro.

The company’s 4.0-liter twin-turbo V8 operates under the hood. It just has different settings now. And that is surely the most important upgrade that the car gets. The unit now develops no less than 838 horsepower. That is more than the Black Series variant itself. The latter has to deal with 730 horsepower and 800 Nm of torque. 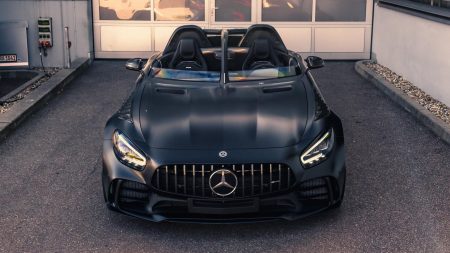 The HWA AG race team carried out the conversion. They were the ones to design and develop the project. The engineers also worked hard to put the car through a massive diet, since it is 100 lighter than the standard roadster. There is no additional reinforcement.

Unofficial sources claim that the limited-run model is already sold out. The designer revealed at the 2021 Monaco Grand Prix, a décor obviously suitable for the speedster.